Considering the symbolic meanings of food: How the Other Half Eats 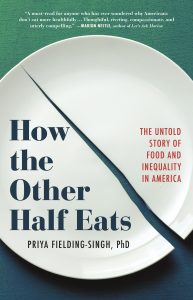 The pandemic has shined a spotlight on food and inequality in the United States. Over the past eighteen months, we’ve witnessed alarming upticks in hunger, the widening of food insecurity disparities, and sweeping efforts by the federal government to address the impacts of economic hardship on families’ diets and nutrition.

But nutritional inequality was a pressing problem long before the pandemic. The nutritional gap between rich and poor in the U.S. has existed for decades and continues to grow: while the rich continue to make gains nutritionally, the diets of lower income families have largely stagnated.

Yet despite the widespread knowledge that nutritional inequality is a crisis helping to fuel broader health disparities, we still lack an in-depth understanding of this inequality’s root causes. Indeed, the most commonly-held culprit for dietary disparities, food deserts, have disappointingly turned out to be hardly any culprit at all.

For the past decade, the food desert narrative has held that families living in food deserts, or low-income neighborhoods with a dearth of supermarkets, don’t have access to healthy foods (like fruits and vegetables), and are left with no choice but to eat the less healthy foods they can access.

But mounting research on food access and food deserts actually tell a dramatically different story. This growing body of work suggests that differences in food access account for just 10 percent of the nutritional gap between rich and poor.

If food access disparities don’t drive nutritional inequality, then what does?

This question is at the heart of my new book, How the Other Half Eats. The book draws on years of field research I conducted with families across income levels, including one hundred sixty interviews with parents and kids, and hundreds of hours of observations of families’ dietary practices.

What I learned through my time with families was that the causes of nutritional inequality go far beyond food access. It isn’t just access to healthy food that shapes families’ diets, but also food’s meanings to families.

In my book, I show how and why food means something dramatically different to mothers raising their children in poverty compared to those doing the same in affluent contexts. These different – and generally overlooked – meanings are central to the story of why families with diverging resources eat so differently.

Across the income spectrum, the mothers I met understood that junk food was not an ideal choice for kids. Most moms would have preferred their kids skip the soda and Cheetos. But I also  observed that mothers’ feeding practices and food choices for their children weren’t solely based on nutritional value. Rather, these choices often related far more to food’s symbolic value to mothers.

For low-income mothers raising their children in poverty, ongoing financial scarcity often meant having to say no to a lot of children’s food requests: no to new clothes, water park tickets, and family vacations. Within this context of no, food was often one of the few things that low-income moms could actually say yes to their kids about in daily life. There was generally always a dollar lying around that could be put toward a can of Coke or a Twix bar. Saying yes offered low-income moms a chance to offer love and affection to their children – to show their kids they were heard and cared about, and that they would work to honor their preferences. Saying yes, in turn, helped bolster low-income moms’ sense of worth; it offered them proof, in a world that so often cast them as irresponsible caregivers, that they were still good moms.

In contrast, I observed higher-income moms saying no far more often to their kids’ junk food requests. These denials were similarly rooted in food’s symbolic meaning to moms. Raising kids in affluent contexts meant that these mothers often had more things that they could say yes to their kids about on a daily basis, whether it was a new pair of jeans or a replacement for a shattered phone screen. For these mothers, because there was so much to say yes to, saying no was far less emotionally distressing. What’s more, as much as saying yes reflected low-income moms’ commitments to doing right by their kids, the same was true for their more affluent counterparts. Saying no was how these moms showed themselves and others that they were committed to their children’s diets and health – that they were good moms.

Our conversations about – and proposed solutions – nutritional inequality in this country need to take these symbolic meanings into account.

Indeed, my research suggests that it’s time to move beyond conversations narrowly focused on food access. Certainly, ensuring that every family has geographic and financial access to healthy food is key to solving this crisis. But we should consider access a necessary but insufficient prerequisite to nutritional equity, rather than the entire solution.

Instead, to close the dietary gap, can we take collective steps to help shift the meaning of food to low-income families? How can we take societal responsibility to make it so that a bag of Cheetos isn’t one of the only things a mom can offer her child amidst a backdrop of scarcity?

Perhaps unsurprisingly, one solution lies in addressing poverty itself. Elevating families out of poverty – and providing them with financial security and stability – can help reduce the symbolic weight of kids’ junk food requests.

Indeed, the pandemic has highlighted that we have the power to boost families’ economically. Over the past year, we’ve seen how increases in SNAP and unemployment benefits and the wide distribution of child tax credits and stimulus checks have significantly improved families’ economic conditions – even lifted millions of families out of poverty. The resources are there to solve nutritional inequality; now it’s up to us to use them. The health and well-being of American families depends on it.

Priya Fielding-Singh is an Assistant Professor in the Department of Family and Consumer Studies at the University of Utah, where she researches, teaches, and writes about families, health, and inequality in America. Her new book, How the Other Half Eats, will be published November 16th. You can find her on Twitter at @priyafsingh.