Who Is Offered and Who Gets an IUD or Implant Before Leaving the Hospital after Having a Baby?

Reposted with permission from the UT Austin Population Research Center.

The American College of Obstetricians and Gynecologists (ACOG) recommends that healthcare providers routinely offer their patients intrauterine devices (IUDs) immediately after delivery of the placenta and contraceptive implants prior to hospital discharge. ACOG recognizes that IUDs and implants, collectively called LARC (for long-acting reversible contraception), are a safe and effective contraceptive option for patients right after delivery. These immediate postpartum LARC insertions are effective in decreasing the rates of unintended pregnancies and short intervals between pregnancies.

Previous studies in Texas have shown that many women want to obtain an IUD or implant after delivery but are unable to do so.

Starting in July 2014, physicians at a large public safety net hospital in Texas, which serves a predominantly Hispanic population, began offering their patients immediate postpartum LARC methods. In this hospital, all women could potentially receive an IUD or implant prior to discharge, regardless of insurance coverage, if they did not have any medical contraindications to the device and were offered it.

After immediate postpartum LARC became available in the hospital, providers were instructed to include counseling about immediate postpartum LARC during prenatal care and at the time of admission for delivery. The goal in the contraception counseling sessions was to discuss all forms of birth control with all patients, even with those desiring sterilization, and for the patient and the provider to make a patient-centered decision about the patient’s contraceptive method preference.

During the study period, many physicians relied on trained or ad hoc interpreters to provide contraceptive counseling to their non-English-speaking population during prenatal care and hospital stays. Trained interpreters typically conducted the service over the phone whereas ad hoc interpreters, usually family members, translated for the physician in person.

This research brief reports on a recent study in which the authors analyzed data from 199 women who delivered a baby in the safety net hospital and wanted to wait at least two years to have another child. Participants were interviewed before hospital discharge and followed for two years.

The authors document who was offered and not offered immediate postpartum LARC, and who received it. Among those who received an IUD or implant immediately following delivery, they describe when women were offered these methods, as well as their satisfaction with the methods, and whether they continued using them in the two years after delivery. 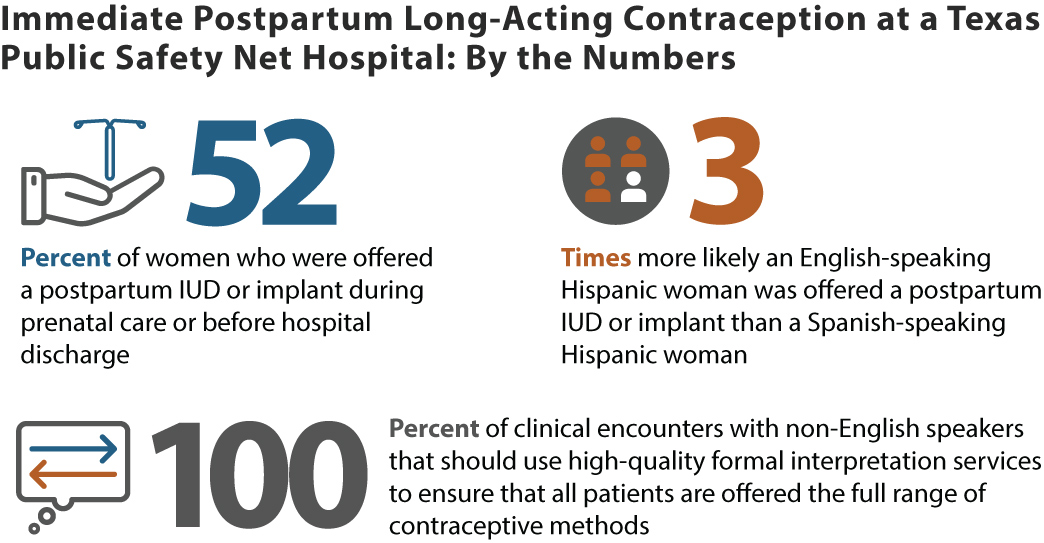 Immediate postpartum LARC is safe and acceptable and should be widely available throughout the state. Covering the costs of this postpartum contraceptive option for all patients, regardless of insurance status, should be the goal for all hospitals that offer the service.

Health care providers could improve patient satisfaction by ensuring that they present the full range of contraceptive options throughout pregnancy to all women. In addition, it is critical that providers work with patients to come to a patient-centered decision on their contraceptive method of choice.

Providers should also strive to deliver more consistent unbiased contraceptive counseling for all patients throughout prenatal care, which may help to decrease the impact of providers’ implicit biases.

Finally, high-quality formal interpretation services should be the gold standard for all clinical encounters to ensure that all patients, regardless of their native language, are offered the full range of contraceptive methods in a way that respects patients’ reproductive autonomy.

This work was supported by the Susan Thompson Buffett Foundation and a center grant from the Eunice Kennedy Shriver National Institute of Child Health and Human Development (P2C HD042849), awarded to the Population Research Center at The University of Texas at Austin. The content is solely the responsibility of the authors and does not necessarily represent the official views of the National Institutes of Health.

Cristina Wallace Huff, wallacehuff@uthscsa.edu, is an assistant professor in Obstetrics and Gynecology at The University of Texas Health Science Center at San Antonio; Joseph E. Potter is a professor of sociology and a faculty research associate in the Population Research Center, The University of Texas at Austin and Kristine Hopkins is a research scientist and faculty research associate in the PRC.