Gender, Parenting, and the Rise of Remote Work During the Pandemic: Implications for Domestic Inequality in the United States 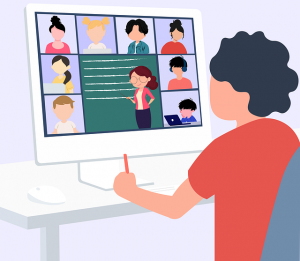 Reposted with permission from the Gender & Society Blog

The closure of schools and childcare centers in response to the COVID-19 pandemic has intensified pressure on U.S. parents already struggling to balance employment and family caregiving in a country that provides little social support. The move of schooling and childcare into the home – along with the still-unfolding effects on women’s employment – has raised questions about the long-term consequences for gender equality in the U.S.

Some are optimistic that these large-scale disruptions – which, for some, have included new opportunities to work from home – offer a chance to increase gender equality in the division of care and domestic work. As remote work decreases the need for “face time” at the office, classic rationales justifying an unequal division of domestic labor may also recede. Others, however, remain skeptical, noting that if the increased unpaid work falls disproportionately on mothers, the loss of childcare and on-site schooling will only exacerbate existing gender inequalities, especially given women’s greater risk of job loss in the current “shesession.” Additionally, even if remote work offers an opportunity to increase gender equality for remote workers, access to this arrangement remains a largely white-collar privilege that limits such potential gains to a privileged few.

In our study, published in Gender & Society, we ask how families experienced and responded to sudden changes in paid and unpaid work in the early months of the pandemic, focusing in particular on how these experiences varied by parents’ ability to work remotely. Analyzing nationally representative survey data from 478 partnered parents, collected in April 2020, we examine how the loss of childcare and in-person schooling affected the division of housework, childcare, and children’s remote learning as well as how pressured parents felt about the sudden responsibility for their children’s schooling.

Our results indicate that among couples with children, the consequences of these pandemic-induced shifts in schooling and childcare largely depended not just on individuals’ own work circumstances but on their partners’ as well.

In families where both parents worked from home, the response to the increased domestic workload was generally egalitarian – mothers and fathers alike reported almost identical increases in housework and childcare and in responsibility for housework and child care as well.  Mothers and fathers in households with two teleworkers also reported feeling nearly equal amounts of pressure about their children’s schooling.  Even in the scenario where both parents worked from home, however, women still bore disproportionate responsibility for unpaid work since similar increases left pre-pandemic inequality intact. Mothers were thus more than twice as likely as fathers to say they were primarily responsible for housework and childcare during the pandemic and over 1.5 times more likely to report taking on the bulk of managing their children’s home learning.

Disparities in housework, childcare, and home education were even greater when only one spouse worked remotely. When mothers worked from home alone, they were more likely than mothers in dual remote-worker couples to have increased their housework time, absorbing the additional domestic work. In contrast, when fathers alone worked from home, they reported far less involvement in domestic work than either mothers working from home alone or fathers in dual-remote working couples.

When domestic workloads increased and neither parent worked from home, mothers mostly picked up the slack – especially when it came to housework and home learning. Among couples not working remotely, mothers were twice as likely as fathers to have increased their household time and were three times as likely to report being primarily responsible for housework. These mothers were also seven times as likely as fathers to say they did the majority of children’s home learning and, consequently, were twice as likely to report feeling pressure related to their children’s remote education.

We cannot yet know the longer-term consequences of the rise in remote work post-pandemic. Taken together, however, these findings suggest that gender remains a powerful force in organizing domestic work despite the greater flexibility that working remotely allows. In the most optimistic scenario, where both partners worked remotely, the gender division of labor remained relatively stable with both mothers and fathers contributing more to housework and childcare in the wake of school and childcare closures. In couples where neither parent worked from home or where mothers alone did so, mothers became the stopgap who absorbed most of the additional caring and schooling of children. For reasons that need greater exploration, fathers who work from home were generally better able to protect themselves from the incursions of unpaid care work. Going forward, our findings suggest that whether remote work fosters more equality or exacerbates preexisting inequalities will depend on the varied forms it takes in families.

Allison Dunatchik is a PhD student in Sociology and Demography at the University of Pennsylvania. Her research centers on gender, work and family, with a focus on how public policies affect gender and class inequalities inside and outside of the household.

Kathleen Gerson is Collegiate Professor of Arts & Science and Professor of Sociology at New York University. She is the author of “The Science and Art of Interviewing” and “The Unfinished Revolution: Coming of Age in a New Era of Gender, Work, and Family,” among other books. She is currently writing a book on the collision of work and caretaking in contemporary America.

Jennifer Glass is the Centennial Commission Professor of Liberal Arts in the Department of Sociology of the University of Texas–Austin, and Executive Director of the Council on Contemporary Families. Her recent research explores how work–family public policies improve family well-being, and why mothers continue to face a motherhood pay penalty as their income generating responsibility for their children grows.

Jerry A. Jacobs, Professor of Sociology at the University of Pennsylvania, is the co-founder and first president of the Work and Family Researchers Network. Jacobs has written extensively about women’s careers and work-family issues. His six books include The Time Divide: Work, Family and Gender Inequality (2004) with Kathleen Gerson and the Changing Face of Medicine: Women Doctors and the Evolution of Health Care in America (2008) with Ann Boulis.

Haley Stritzel is a PhD candidate in Sociology and a graduate student trainee in the Population Research Center at the University of Texas at Austin. Haley uses a range of quantitative and demographic research methods to study the family and neighborhood contexts of child and adolescent health. Her dissertation focuses on the geographic distribution and correlates of foster care entries associated with parental substance use.