How (Skin) Deep is Your Love? 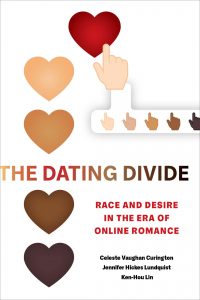 For all its misery, the pandemic has offered some unexpected gifts: cleaner air, quality time spent with dogs, and, not least, the rise of online romance. Although meeting online eclipsed other ways to start a relationship as early as 2013, the pandemic cemented online dating as the most common gateway to romance.

Given the popularity of online dating and increased popular support for the Black Lives Matters movement, what does this mean for race and relationships?  While neighborhoods, schools, places of worship and other social spaces are still highly racially segregated, the digital dating market is one of the few spaces where daters have direct access to millions of others of different racial backgrounds.  Online dating has the potential to be a powerful agent for social change.

Yet in our book The Dating Divide: Race and Desire in the Era of Online Romance, we find that the commodification of people in online dating markets makes it efficient and convenient to categorize—and exclude—others by their race. Every dater has a unique story to tell, yet one thing was clear as we teased out daters’ millions of interactions on a major online-dating platform and interviewed daters around the country: for all daters, straight or gay, race plays a more fundamental role in our roman­tic lives than any other social identity.

Race determines how daters approach or avoid others. It drives anxieties about the “real reasons” others pursue or reject them. It confuses. It frustrates. And some of the most racially-progressive white daters we interviewed were far less open-minded when it came to their dating choices. Over and over, the evidence shows that white daters have the most dating options, and racial minorities the least. A Caribbean-American man told us he envies the relative ease that white men enjoy on dating apps:

“They’re easily able to date faster than men who are of color. It’s a fact. Women don’t want to step up to the plate, especially white women. They’re so ‘liberal,’ ‘they’re fighting for my rights’– blah, blah, blah. They speak about ‘white privilege,’ blah, blah and all this bullshit.”

While there are many exceptions to the rule, statistically speaking, Black daters face the most pronounced exclusion in online dating, regardless of sexual identity. Race combined with gender is a force multiplier of this dynamic, earning white men universally high interest from not just white women, but also Asian, Latina and black women. Black women experience the most frequent rejections from everyone but other black daters. A dater we interviewed described being simultaneously overlooked and yet harshly scrutinized as a black woman:

“Online dating makes me feel like … I’m invisible and hyper-visible. …It really is very much a White women’s market. …There’s so many different stereotypes about Black women that I feel like come to play in how people approach me and I’m guessing other Black women on these platforms. … Like, ‘I’m giving you traps and you should take it.’ Or, like, ‘you’re extra sexual and promiscuous.’ It kind of sucked, especially when you knew all these women, specifically White women, [were] talking about, ‘I have so many messages, and I just can’t do all this.’ And I’m like, “I got two messages today and one of them asked me if I like White chocolate.”

Anti-blackness was a pervasive theme running through our analyses and interviews, and we also found widespread preference by daters of all races for lighter skin tones among daters within the same race. While our book situates the popularity of online dating within the evolution of racialized patterns of courtship, it also finds that online racial discrimination is itself a distinct manifestation of racism. Even though deeply rooted in the past, this new form of racism interacts with fast-evolving technologies in ways that produce experiences and consequences distinct from traditional racism.

It is striking that dating is one of the only contexts left in modern-day U.S. society where it remains acceptable to articulate racial preferences. In education, employment, housing, and lending, racial preferences have been recognized as not only legally but also morally wrong. Yet racial categories are explicitly and unapologetically part of the selection process of many dating websites and apps. Some of the most popular dating sites ask users to specify their racial preferences in their profiles and codify them with partner searches filtered by race.

In our book we connect the evolution of online dating today to the inven­tion of dating in the early twentieth century—a new form of courtship that diminished familial and state control over intimate choice. This and the growing emphasis of individualism together paved the way for present-day acceptance of racial discrimination in dating.

As a form of courtship, dating originated in the 1900s just as the U.S. racial categories we know today were being solidified and regulated through laws and everyday practice. This meant that the birth of individual preference and mod­ern notions of romance became deeply imprinted with racialized desire and calculus.  Intimate racial sorting went from being a publicly regulated practice through anti-miscegenation policy to a modern day personal choice, one that has become obscured from the public.

Clearly, racial discrimination in dating is different from other forms of discrimination, one that could never be regulated by the kinds of policies that we’ve adopted to remedy unequal access to housing, jobs, and educa­tion.  And, indeed, for some ethnic minorities, dating within one’s own race means something very different than it does for whites, symbolizing a political and cultural choice against a backdrop of racial marginalization and racially-driven sexual harassment online.

Our intent is not to judge individuals for their personal dating preferences.  We are interested instead in the societal language of individual choice that allows daters to view intimate racial preferences as benign, natural, and idiosyncratic (like “preferring anchovies on a pizza,” as one dater described it). Yet these “random” preferences map precisely onto existing racial hierarchies that have been identified and condemned in other spheres.

White Americans are barely able to acknowledge the role of racial inequality in our public institutions; acknowledging that it also plays a role in our private, most intimate lives is even harder to admit. Many daters told us that they can’t help who they are attracted to, that their choices are simply a matter of individual taste. But if intimate preferences are so individu­alistic and mysterious, why are they so similar and predictable? Our analyses showed over and over that race is a crucial predictor of mate selection, carrying the boundaries of our racially-segregated past into the era of personal choice.

Dating companies could be a force for powerful positive change by doing away with racial filters, as some apps recently did in response to the Black Lives Matter movement.  And yet it’s complicated: the women of color we interviewed frequently told us that that filters were one way they could protect themselves from frequent exposure to sexual fetishization and even outright racial hostility. But platforms could be tweaked to create a sorting process that decenters rather than foregrounds the importance of race, creating alternative designs that emphasize shared interests and biography more than photographic data. They can make transparent the invisible role of algorithms in their matching design and they can intentionally disrupt the reinforcement of inadvertent of race bias that is often built into these algorithms based on past user behavior.

Ultimately, however, it is our own behavior that has influenced the design of these applications. As it turns out, our race preferences are profitable.

We may not have intentionally absorbed societal racial preferences, but we can be intentional about acknowledging them and deciding whether to perpetuate or dis­rupt them.  As we fight for racial justice in “public life,” it’s worth remembering that every click and swipe, no matter how trivial it seems, has last­ing implications for racial division in the United States.