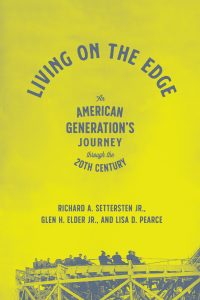 In our new book, Living on the Edge: An American Generation’s Journey through the Twentieth Century (University of Chicago Press, 2021), we follow parents born around 1900 as they navigated what Robert Gordon (2016) has called a “century of revolutionary change.” Using data from the lifelong Berkeley Study, which started in the 1920s, we set out to examine how the rapid social changes of the twentieth century were expressed in the lives of these individuals and families. This task seemed especially relevant in our own era of accelerating change and discord.

The lives of this rarely studied 1900 generation were marked by migration, two world wars, great swings in economic depression and prosperity, and unimaginable inventions and advances in science and technology. As one participant said in the 1980s, “Never again will history equal the rate of change of this period: from covered wagons to the moon!”

But what could we possibly have in common with a generation of people born 120 years ago?

The 1900 generation is what Leonard Cain (1967) called a “hinge generation,” or bridge, between past and present. Their lives were drastically different from the generations before them, and they wrestled with and instigated changes that echo through later generations. In fact, in reading the first-hand accounts of their lives, we were often struck by how modern their voices sounded.

Our research reveals many examples of their status as a hinge generation – including profound changes in the nature of work, the growing separation of workplaces and homes, the expansion of higher education, married women’s increasing labor force participation, and greater egalitarianism in marriage.

And perhaps nowhere is their hinge generation status more apparent than in the realm of parenting.

Today’s intensive parenting, it turns out, is not so new. It is founded on an approach underway since the 1920s.

This can be seen in the middle-class parents of the 1900 generation, who were at the forefront of a deep cultural shift in parenting:

* They were the first generation of parents to see revolutionary advances in the amount and quality of childrearing advice. Science related to child development emerged in the early 1920s, along with a commitment to conducting research to serve the development of children and families.

* To them, parenting was a skill to be learned and mastered. They provided opportunities to their children that they did not themselves have: music, art, and dancing lessons; clothes and toys; better nutrition, education, and health care; more involved parents, less troubled family relationships, and greater economic security.

Several parents said that their generation had actively decided to have fewer children in order to give them more. As a middle-class father noted:

Parents used to have an easier time raising children because they didn’t pay so much attention to them … They didn’t give them all kinds of special lessons and worry over their adjustments. Our children have been tied up in one thing or another ever since they were born.

* One downside to being better schooled in parenting was that they were more worried about their children’s outcomes and their own incompetence as parents. A middle-class mother observed:

There has been so much propaganda on parents, to point out our psychological responsibilities, that we are always overanxious. Previously, parents just let children grow up and hoped they turned out for the best; if they didn’t, that was due to the child. Whereas parents of our generation worry over what we have done wrong.

* Because knowledge of child development was growing, couples were more conscious of the role of fathers in the development of their children. Many of these men wanted to become better fathers and husbands.

* They struggled with how to raise kids in a new world that offered greater mobility, plentiful temptations, and a compromised ability to exert parental influence.  This was especially true in wartime, as the Berkeley parents were raising adolescents in the mobilized Bay Area. The super-charged nature of life left parents worried about youth delinquency and sexual promiscuity, especially with so many troops coming into train stations and the port. They also speak often of the moral threat of “the movies” and radio.

* Parents’ greater knowledge left them aware of the inherently ambiguous and uncertain nature of their role. Previous generations were so sure about what was “right” and consequently trained youngsters early to fit in with parents’ demands. This might not have been good for children’s development, but it was easier. In the words of one mother:

Everybody was more comfortable in knowing precisely where the lines were drawn, and now, neither the parents nor the children know.

* Parents and children alike were more open and willing to share with one another, shrinking the “generation gap.” Greater equality in the parent-child relationship brought new challenges and benefits. As one parent noted:

Today’s children may openly criticize their parents, but they don’t pile up their resentments!

The Berkeley Study archives allowed us to discover that the seeds of today’s child-focused parenting can be found in the markedly different strategies of parents a century ago.

This hinge generation reminds us that many of things we assume are unique to our own times are shared with and built upon the ideas and actions of people long before us.