Men who have affairs: An Interview with Alicia Walker 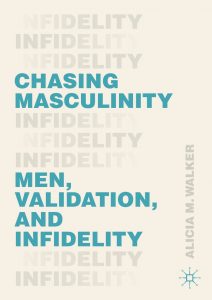 In 2017 I interviewed Dr. Alicia Walker about her first book, The Secret Life of the Cheating Wife, which was a study of women who have affairs using the website Ashley Madison. In her new book, Chasing Masculinity: Men, Validation and Infidelity she reports on in-depth interviews with 46 men who use the same website to have relationships outside of their marriages or long term partnerships. I recently had the opportunity to interview Dr. Walker about her new book.

AK: Why do men have affairs?

AW: The men in this study believed their primary partners lacked interest in them, both as sexual partners and as people. They perceived their wives as disinterested in the details of their day, their dreams, goals, and fears. They judged their primary partners as disappointed in them, as partners, as people, and as men. The men fashioned their wives as “impossible to please,” claiming they nagged and no amount of effort ever contented them. The men framed their own contributions to household labor as a “favor” to their wife, whom they felt should express gratitude for the effort. However, they clearly placed the blame for this dynamic on the institution of marriage itself rather than something specific about their wives. They explained that marriage trains men to feel badly about themselves.

Further, the men described either sexless marriages or sexual dynamics entirely lacking in the sensuality, passion, and fervor they craved. Many men detailed years and decades of sexual encounters where their wives failed to orgasm. Men internalized all of these conditions as signals of their inferiority. They believed their primary partners’ disinterest in them indicated their own failure of masculinity. In their minds, if they were manly enough, their wives would both enthusiastically engage in sex with them and hang on their every word.

The men in this study made clear that while sexual, their affairs primarily served to boost their self-esteem. Specifically, they sought out affair partners who provided emotional support, relational management, and emotional connection. The men wanted romantic partners who asked about their days, helped manage their emotional life, and made them feel safe and cherished. These affairs included sexual encounters, and they wanted affair partners who enthusiastically participated in prolonged sexual encounters, what popular culture calls “The Girlfriend Experience.” Affair partners who experienced orgasm further validated the men’s sense of accomplishment and skill. These provisions increased the men’s sense of themselves as “masculine.”

For these men, the attention and enthusiasm of their primary partners would prevent their participation in affairs. While the men appreciated the provision of relational management (help managing their emotional lives), emotional connection, interest in them, and enthusiasm in bed gained in their outside partnerships, they wanted most to have all of that from their primary partners. So, while outside partners soothed the men’s hurt egos and sense of themselves as masculine, their lives still lacked what they craved most: approval and attention from their primary partners. While they valued the self-esteem boost from affairs, the men reported feelings of emasculation as a result of the dynamics of the primary partnership, a space where men believed they failed repeatedly to perform masculinity to the satisfaction of their wives.

AK: Your earlier book examined women who have affairs and this one focuses on men. How are men and women’s motivations for affairs different, and how do those differences reflect broader ideas about gender in society?

This difference functions as a broader effect of gender socialization in our society. The burden of masculinity lies in its continual need to be performed and proven. At no point do men reach a finish line where we proclaim them “manly enough.” Thus, when primary partnerships failed to live up to men’s expectations, they concluded the fault must lie within their own inferiority, specifically, their inadequacies as “men.”

AK: What is one finding that surprised you when you were doing your research?

AW: I found most surprising the fact that men internalize their primary partners’ disinterest, frustration, or failure to verbalize thanks for routine household tasks as disappointment in them, and further assume this as an indicator of their inadequate masculinity. Men believed their primary partners to feel constant disappointment in them based on her failure to inquire about his day, lack of desire in participating in extended sexual sessions, and failure to verbalize thanks. In general, men express tremendous hurt and resentment in response to what they perceived as their primary partners’ lack of enthusiasm in all arenas. Further, they believe their own inadequacies provoke her disappointment. They think that her lack of interest signals a lack of adequate manliness within them. If she fails to orgasm, if she fails to appropriately appreciate his domestic labor efforts, if she seems bored with his stories, they experience injury and upset, but immediately fault themselves. As one participant put it: “Men’s egos need constant pumping up.” Both the reported volume of need for praise and their self-awareness of this need served as the biggest surprise.

Alicia Walker is an Assistant Professor of Sociology at Missouri State University, and author of The Secret Life of the Cheating Wife: Power, Pragmatism, and Pleasure in Women’s Infidelity and Chasing Masculinity: Men, Validation and Infidelity. Follow her on twitter at @AliciaMWalker1. Arielle Kuperberg is an Associate Professor of Sociology and Women’s, Gender and Sexuality Studies at the University of North Carolina at Greensboro, and the editor of this blog. Follow her on twitter at @ATKuperberg.

This is phenomenonal. I wonder what the implications are for those seeking polyamory.

I assume she means uninterested and not disinterested in this article?

Men beating themselves up because they are trying to own their life, and comparing themselves poorly against society's expectations of an ideal husband, is dismissed as “Men’s egos need constant pumping up.”.

What we learn then is that there seems to be a difference in why each gender has affairs. But an affair is an affair, so does it really matter the "reason? for affairs? And since those having affairs are in fact cheating, deceptive, can we believe the reasons they give when questioned for this sort of study?