The Unequal Impact of COVID-19 on Children’s Economic Vulnerability

Reprinted with permission from Econofact

There are large disparities in COVID-related unemployment, with the largest proportional losses among Latinx and less-educated workers. The effects have been particularly felt among children.  In our original research based on very recent data, we find that one-in-five children in the United States experienced the job loss of an adult in their household between February and April of 2020 and one-in-twelve experienced the job loss of all adult earners in their household, including one-in-seven children living with single parents. Our analysis also points to striking disparities by race, ethnicity, and income, with higher shares of Latinx, Black, and lower-income children losing all adult earners in their households. While there was some job recovery between April and May, the pattern of job losses appears to be exacerbating inequality. 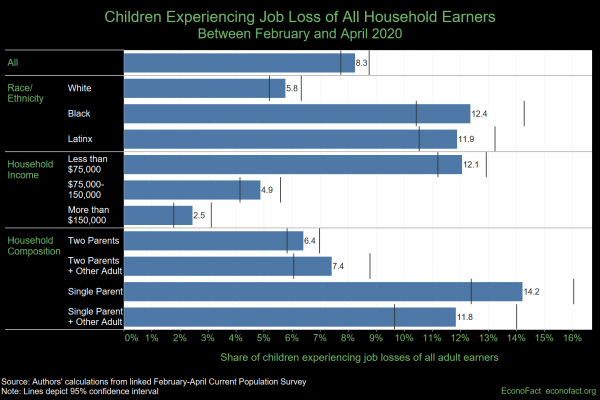 The number of children who lived in households that experienced job loss in the first months of the COVID-19 pandemic was staggering. It was also consistent with the precipitous rise in unemployment during this period. The most recent data available from the May CPS interviews points to modest and unequal recovery and, of course, some suggest a worsening of conditions as the pandemic spreads to new areas of the country. The job losses followed longstanding patterns of unequal vulnerability and exacerbated inequalities by race and ethnicity, income, and family structure. Furthermore, issues of child well-being extend beyond economic security to broader indicators of development, including stress-related health outcomes, cognitive development, and social development. Children—particularly those at greatest risk of economic vulnerability—need support at this unprecedented time. Many children at greatest risk are in states with weak track records of social support, and they need better access to income security, childcare, education, and nutrition. Delaying this support will exacerbate the long-term implications of the pandemic on a generation of children.