Reposted from the University of Texas at Austin Population Research Center

While it is well-established that marriage benefits physical and emotional well-being, it is not marital status alone that matters but also marital quality. Substantial evidence demonstrates that marital strain increases psychological distress for married people. Most of this evidence is based exclusively on people’s own reports of the strain they feel in their marriages, referred to by researchers as “self-reported marital strain.” However, most research has not considered how a spouse’s perceptions and feelings about the marriage, known as “spouse-reported marital strain,” may also contribute to an individual’s distress.

Obtaining information from spouses is important because even if an individual is generally happy with the marriage, his or her spouse might be unhappy. The individual can then pick up on and be negatively affected by the spouse’s unhappiness. Dyadic data, which obtains appraisals from both spouses, may therefore provide important insights into the association between marital strain and psychological distress.

Prior research, based almost exclusively on different-sex couples, also suggests that marital strain may lead to more psychological distress for women than for men. This gender difference has been theorized by some to be the result of women’s greater interpersonal connections, which may increase their awareness of and reactivity to relationship strain. Others argue that gendered power dynamics, in which women are seen as subordinate to men, explain this difference.

Same-sex couples typically adhere less strongly to gendered norms and expectations and are more egalitarian than different-sex couples. A gender-as-relational perspective – which argues that the way women and men enact gender differs depending on whether they are interacting with a woman or a man – would suggest that the relationship between self- and spouse-reported marital strain and psychological distress might operate differently for women and men in lesbian, gay, and heterosexual marriages.

►►The association of self-reported marital strain with psychological distress is stronger for women in different-sex marriages compared to all other union types. 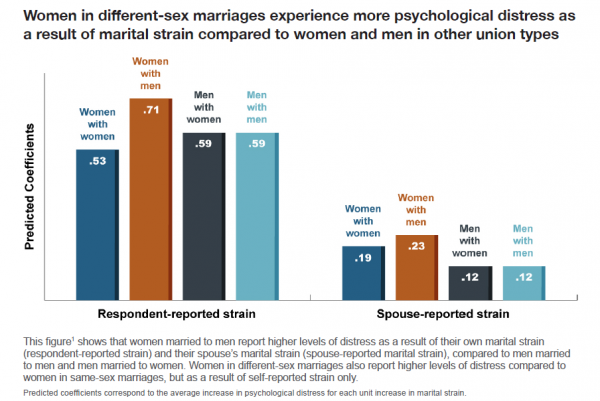 Research would benefit from taking a gender-as-relational approach to studying marital relationships. As this research clearly shows, it is not an individual’s gender but rather an individual’s gender in combination with his or her spouse’s gender that plays a key role in the link between marital strain and psychological distress, with women married to men showing a unique disadvantage compared to other union types. Thus, research must look beyond the individual to consider how gendered relational contexts shape processes of health and well-being.

Implications for mental health professionals
Clinicians would also benefit from considering the gendered relational contexts of marital relationships. In other words, counseling and other professional interactions with couples would be strengthened by thinking of the individual in combination with their spouse’s gender.

Indeed, when mental health clinicians move beyond an exclusive focus on the individual and expand their approach to also consider the gender of their patient’s spouse, they can better understand and thus provide better care to their patients across all marital contexts. This is especially vital for women in different-sex marriages. Given the higher rates of depression and anxiety for women, a focus on improving the marital experiences of women in different-sex marriages may help to reduce mental health disparities.
Study findings also point to the importance of considering how either spouse’s perceptions of marital strain and conflict can undermine the psychological well-being of both spouses. Thus, clinicians should make every effort to collect information about both the patients’ and spouses’ marital experiences.

Michael A. Garcia (michael.garcia@utexas.edu) is a PhD student in sociology and a graduate student trainee in the Population Research Center at The University of Texas at Austin, and Debra Umberson is a professor of sociology and director of the Population Research Center, UT Austin who holds the Christine and Stanley E. Adams, Jr. Centennial Professorship in Liberal Arts.