The Company We Keep: Interracial Friendships and Romantic Relationships from Adolescence to Adulthood 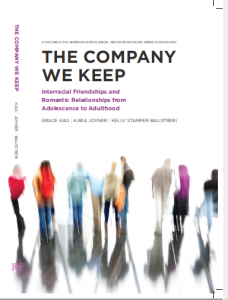 Friendships and romantic relationships are universal experiences, but we know relatively little about them, especially using population-based nationally-representative samples. In The Company We Keep: Interracial Friendships and Romantic Relationships from Adolescence to Adulthood (2019, Russell Sage Foundation), we use The National Longitudinal Study of Adolescent to Adult Health (Add Health) to examine interracial romance and friendship among adolescents aged 12-17 and when they are adults aged 25-32. We wrote this book for a broader readership, so we tried our best to only present graphs. There is one table in the entire book, which is pretty good given that we are all social demographers! I think the entire book or single chapters (probably Chapter 1 with any of the substantive chapters) could be assigned to any undergraduate classes on race and ethnicity, youth and adolescence, sociology of education, or marriage and the family.

Kara and I had worked on these topics starting about 20 years ago (our first paper from this work came out in 2000), but when Wave IV of Add Health was released about 10 years ago, we began talking about going back and linking adult relationships with childhood experiences. We were fortunate enough to work with one of Kara’s colleagues, Kelly. We have been working on this book for 6 or 7 years.

Our book has several major findings:

We were also disturbed by the larger numbers of students who did not report having a single friend at school. This was true for less than 10% of white girls, but closer to 30-40% of Black, Hispanic and Asian boys did not have a friend at school. We argue that isolation or marginalization of certain minority gender groups is troubling, and that we should not simply evaluate whether children are earning high grades or test scores, but also whether they are accepted socially at school.

Overall, I think that the book does offer some signs of optimism as well – early interracial experiences via even the most casual contact, has long-lasting consequences on relationships later in life.

Grace Kao is IBM Professor and Chair of Sociology at Yale University. She is also Faculty Director of Education Studies and Direct of the Center for Empirical Research on Stratification and Inequality (CERSI). She is also affiliated with the Ethnic, Race, and Migration Program at Yale University. She is the Past Vice President of the American Sociological Association. Follow her on twitter @Prof_GraceKao.