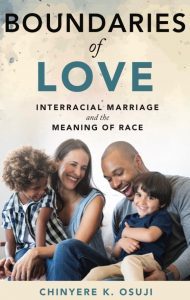 Reposted with permission from the blog of Chinyere Osuji.

When I was studying at Harvard in the early 2000s, I had a black immigrant professor who had built part of his career gas-lighting anti-black discrimination in favor of 1990s-style black cultural inferiority tropes. My grad school girlfriends and I awkwardly giggled over “the sex parts” of his book on black assimilation. He cited statistics saying that black women did not perform oral sex as often as white women, making them less desirable sexual partners. Sexual incompatibility on this sex act was part of the motor driving black men to date interracially more than black women. I was struck by how he ignored scholarship showing how white women are lauded as the essence of beauty, domesticity, and ideal womanhood. Instead, in a reversal of the Jezebel stereotype, he explained this race-gender imbalance as due to black women being prudes. I remember that when we stopped laughing, we speculated on which black woman might have hurt him and whether this was scholarly revenge porn against black women. We also questioned how his much paler wife felt about this discussion.

Over a decade later, I noticed the increasing popularity of a similar dynamic: “Black women need to be more open!”

How many black women have heard this in reference to our dating and marriage prospects?

Black women’s inability to “open up” to dating non-blacks (presumably whites) was curtailing our attempts at finding long-term love. Oprah even emphasized this point to her best friend, Gayle, trying to convince her to date non-black men. Once more, statistics showing black men being more likely to interracially marry were used to show how our actions were deficient.

According to the US Census, close to 90% of all marriages take place within the same ethnic or racial group, with whites being the least likely to inter-marry. However, black women’s intra-racial preferences, not anti-blackness and misogynoir, were the cause of our lower likelihood for marriage in comparison to other similarly situated women.

Research by demographers shows that most non-black men, even those open to interracial dating, discriminate against black women in their online dating profiles. At the 2018 American Sociological Association annual meeting, Belinda Robnett (UC-Irvine) presented research showing white men were open to dating black women for interracial sex, but not interracial dating. Together, their studies suggested that, as in all pairings, it takes two to tango and, unless it is solely horizontally, black women indeed have better odds at finding long-term romantic partnerships with black men.

In my book, Boundaries of Love: Interracial Marriage and the Meaning of Race, I conducted over 100 interviews with people in black-white couples in Los Angeles and Rio de Janeiro. I had the privilege of listening to men and women across racial pairings share the monotony, excitement, struggles, and joys of being married to a person on the other side of the ethnoracial hierarchy. Almost all couples seemed content in their relationships. Several were parents navigating how to raise children who were comfortable with the black, white, multiracial, and multi-ethnic sides of their extended families.

One thing that struck me about the black women whom I interviewed was how several of them complained about their white husbands who “just didn’t get it.” As people on the top of gender, racial, and often class hierarchies, these white men often could not make sense of the privileges they accrued in a society that fought very hard to occlude them. The work often fell on their black wives to teach them how they navigated the world as white middle class men. A few white husbands were “woke” to these dynamics. When I interviewed them individually, we laughed about their couple tactic of wives “tagging” them for interactions with customer service representatives and other outsiders. This strategy ensured that they used their race and gender privileges for the good of the family. Still, black women in other relationships described the emotional labor of explaining intersections of disadvantage to their oblivious white husbands.

I asked all of the husbands and wives about their experiences in their “romantic career”— how they understood their desires for spousal characteristics through prior romantic experiences. Unlike the white women whom I interviewed, black women in both Los Angeles and Rio de Janeiro described the slights and microaggressions that they had experienced in the past. Several admitted to having been the “black girl in the closet” to nonblack men they had dated. For example, Lana was a 35-year old black woman whom I interviewed in Los Angeles. She recalled a previous relationship with a white guy when she was in college.

Lana: …. I don’t think he ever told his grandparents, for example, that I was black.  And when he told a group of his friends… they were like, “Oh what does your girlfriend look like?” and he kind of described me and was like “Dark eyes, dark hair, dark skin.” They were kind of like “What?” and it was very like “Oh…” like very, very surprised I guess. So there was definitely some of that and it was kind of difficult for me that if the relationship had gotten more serious that I was gonna have to worry about his family would perceive me or if they’d have – obviously they would have had a problem with me if they’d met me…. just because of me being black.  Not his parents but his grandparents because I had met his parents and I got along really great [with them] actually, but I think he was worried his grandparents just wouldn’t be very tolerant.

Lana’s story was similar to several black women that I interviewed in Los Angeles and Rio de Janeiro. Like Lana, some black wives saw these experiences as a tactic that their previous white boyfriends used to protect them from anti-black relatives or to avoid white shock. Several black women were surprised at how long it had taken them to meet the friends and families of their white husbands. None of the white wives in either setting described similar experiences with previous same- or different-race partners. Other black wives, especially in Rio de Janeiro, described prior non-black partners being ashamed to be seen with them in public. For obvious reasons, black women who had these experiences expressed discomfort with these previous dynamics.

As Jessie Bernard famously articulated, in every (heterosexual) marriage, there are two relationships: “his” and “hers.” For this reason, it is reasonable to expect that partners were having different experiences in these relationships. When I interviewed white husbands in both places, several described having absolute autonomy to their relationships, both current and past. For them, their relationships were none of anyone’s business. As a consequence, they did not echo their black wives’ sentiments of feeling exceedingly excluded from white family and friend networks before they married. Nevertheless, when white husbands “just did not get it,” it was a source of tension in the relationships.

From a research standpoint, Boundaries of Love shows it is unrealistic and unfair to blame black women for their challenges in finding love when misogynoir is embedded in dating and marriage markets in both the United States and Brazil. In addition, this research shows that interracial dating and marriage may involve its own particular sets of issues. At the same time, since no marriage is without its issues, it also shows that black women can form happy, loving relationships with white men.

On a personal note, as someone who dates black men as well as men of different ethnic and racial backgrounds, being open-minded to love should be a goal for everyone, not just black women. Unfortunately, that is far from our social reality and may decreasingly be the case in the Trump era. Still, when it comes to interracial dating and marriage, it’s time to end arguments of black female deficiency. As Marcyliena Morgan, another black professor at Harvard, advised, it is time to love us or leave us alone.

Chinyere Osuji is Assistant Professor of Sociology at Rutgers University at  Camden. In her book, Boundaries of Love: Interracial Marriage and the Meaning of Race (2019, NYU Press), Osuji compares how interracial couples in Brazil and the United States challenge, reproduce, and negotiate the “us” versus “them” mentality of ethnoracial boundaries.Boundaries of Love is based on over 100 interviews with black-white couples to reveal the family as a primary site for understanding the social construction of race.