Dads Count Too: Family-Friendly Policies Must Include Fathers 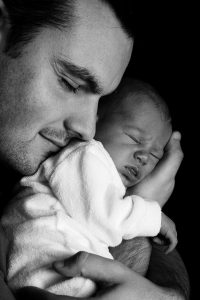 for the Council on Contemporary Families’ Symposium Parents Can’t Go It Alone—They Never Have.

A major obstacle to the successful coordination of work and family life in today’s world is the assumption that this is primarily a woman’s issue. Critics of U.S. social policy often point out how far we lag behind the rest of the world in providing maternity leave. That’s true enough. Of 41 high- and middle-income countries in the Organisation for Economic Co-operation and Development (OECD) or the European Union (EU), the United States is the only one that does not have nationally mandated paid maternity leave.

But many other countries are just as neglectful as the United States when it comes to enabling fathers to integrate work and family life. Ten of those 41 countries fail to mandate any paid leave for fathers. Less than a handful make any serious effort to break the pattern whereby even fathers who have access to leave typically take very little, thus forgoing the opportunity to spend time bonding with their infants and to gain the skills associated with being a primary caregiver.

This exemption—or exclusion—of men from the routines of domestic life is not at all traditional. For millennia, fathers and mothers shared the duties of provisioning the family and organizing its daily activities. Involvement in production and exchange outside the household were seen as a central part of a wife’s duties and household chores as a central part of a husband’s. When a man referred to himself as a sole provider, that was not an affirmation of his masculine identity but a plea for sympathy because he was widowed or his wife was unable to contribute to the family’s subsistence.

Premodern families made no pretense to egalitarianism, but men were not relegated to the sidelines of domestic life. In fact, the very word “domestic” was originally gender-neutral, referring to the industriousness expected of both sexes. Fathers were actively involved in home life, feeding the wood stoves in the kitchen, helping to fetch and carry water, teaching their children to read, and nurturing ties with kin and neighbors in order to sustain the wider social networks of reciprocity on which family well-being depended. Not until the 19th century did fathers begin to be conceptualized as uniquely responsible for earning money and mothers as uniquely responsible for parenting and for processing the goods purchased with the man’s money. And not until the 1920s and 1930s, when children of working-class families started going to school instead of out to work, did a majority of children actually grow up in female-homemaker families.

Today, most children live in households where every adult works for pay, yet in dual-earner families it is women who generally take time off for family needs. This not only perpetuates gender inequality in the workforce but also promotes a division of domestic labor that fosters marital discord, preventing heterosexual couples from achieving the kinds of egalitarian relationships that are now associated the greatest marital satisfaction.

The benefits of maternal leave for the well-being of mothers and children are well established. When such leaves are the norm, they also lessen or even eliminate “the motherhood penalty” whereby mothers are paid and promoted at lower rates than childless women. In Norway between 1979 and the mid-1990s, a combination of paid family leave, subsidized child care, and more flexible work policies completely eliminated the motherhood penalty for female employees in workplaces where people did the same work for the same employer. It reduced that penalty by 75 percent in the workforce overall.

But maternal leave policies do not eliminate the pay and promotion advantages that accrue to husbands and fathers. In fact, maternal leaves, paid or unpaid, can perpetuate the pattern whereby wives essentially subsidize their partners’ greater investment and rewards at work by freeing them from most routine weekday housework and child care.

The expectation that men will increase their work commitment after marriage, especially after a child arrives, has become so entrenched that even when paternal leave is available, men seldom take all or even most of the time to which they are entitled. In part, they fail to do so because they fear being stigmatized as an uncommitted employee. But it is also eminently practical, given that most men earn more than their female partners. Forfeiting a substantial portion of the higher salary seems risky to parents facing the increased financial pressures of a new child. Yet when women reduce their work efforts to allow men to sustain or increase their labor market commitment, that not only contributes to the “motherhood penalty”; it increases the “fatherhood bonus,” which we might also call the “nonparenting incentive.” Such behaviors reinforce women’s secondary position in the workplace and men’s secondary position in the family.

Many men and women would like to break this cycle of gender specialization and inequality. And the good news is that when communities or governments offer generous pay replacement combined with use-it-or-lose-it policies that normalize the practice of paternal leave-taking, couples make different choices.

In Iceland in 2000, for example, men accounted for only 3 percent of all parental leave days taken. By 2007, after full implementation of a father’s quota instituted in 2003, they took almost a third. By 2006, after Norway extended the father’s leave quota to 6 weeks, 70 percent of eligible Norwegian fathers were taking almost all the time for which they were eligible. And when Quebec reserved a use-it-or-lose-it 5-week quota for fathers in 2006, men’s take-up rates increased by 250 percent. By 2010, 80 percent of eligible men were using the leave, and the duration of their leaves had increased by 150 percent.

Paternal leave-taking reduces the degree of gender specialization in families. In Quebec, fathers who took leave increased their core domestic cooking and shopping even after returning to work, while mothers increased their paid labor hours. Norwegian couples who had a child after the introduction of more generous paternal leave policies were more likely to share domestic duties—and significantly less likely to report conflicts over housework—than those who had their last child just before the reform.

Change never comes without cost. A father who takes parental leave may miss some of the promotions and raises associated with uninterrupted work, lowering the marriage and fatherhood bonus that most men now receive. Nevertheless, a recent study in Denmark suggests that when fathers’ leaves allow mothers to develop a more consistent work history, this can lower the motherhood penalty enough to result in increased total household wages.

Furthermore, paternal leave-taking paves the way for further progress in the next generation. In Norway, girls born after men started taking longer paternity leaves were assigned fewer household chores as teenagers—many years after their fathers had returned to work—than their counterparts born just before. Such a change could make a real difference in the United States, where teenage girls rehearse their futures by spending twice as much time cleaning and cooking as teenage boys while receiving less than half as much in allowances!

For their part, boys who see their fathers share housework and child care with their mother are much more likely to do the same when they grow up. One U.S. study found that the extent to which fathers participated in routine, stereotypically female tasks when their sons were very young had a strong influence on the sons’ likelihood of sharing such tasks in their own households 30 years later—and it did so pretty much independently of the gender attitudes their parents espoused. Kids pay more attention to what parents practice than what they preach.

Feminists who believe in equal rights at home as well as work must practice what we preach, working as strenuously for fair and generous paternal leaves as we do for maternal ones.

Stephanie Coontz is Director of Research and Public Education for the Council on Contemporary Families, and Professor Emeritus of History and Family Studies at The Evergreen State College in Olympia, Washington, Coontzs@msn.com