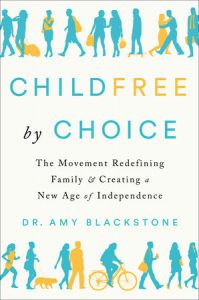 Amy Blackstone is a professor in Sociology and the Margaret Chase Smith Policy Center at the University of Maine. I recently interviewed her about her new book, Childfree by Choice: The Movement Redefining Family and Creating a New Age of Independence (Dutton, 2019). Amy and her husband Lance blog at we’re {not} having a baby!.

BJR: Can you explain why you think that American needs a social movement to support childfree adults?

AB:  It might seem strange to hear that childfree people need the support of a movement but until we live in a world where childfree people can share their status without receiving patronizing responses (e.g., “Oh, you’ll change your mind one day,” and “That’s selfish!” and “But you’re missing out on the most fundamental part of being a woman!”), where they are not immediately presumed to be less-than or to be miserable and lonely and selfish, I think a movement is needed. Beyond these stereotypes of childfree people, there are also structural, institutional issues that a movement can address. In the United States, we have a tax policy that penalizes poor working non-parents. The Earned Income Tax Credit, which was designed to lift people out of poverty by ensuring that they don’t begin owing income tax until their earnings exceed the poverty level, does not apply equally to parents and non-parents in poverty. Many non-parents begin owing income taxes while still below the poverty line. We also need to change how we think about reproductive health and who is responsible for it. For example, vasectomy is safer, more effective, and less costly than tubal ligation but vasectomy rates are half those of tubal ligation rates in the U.S, and one-fifth the rate of tubal ligation worldwide. Much of this has to do with cultural lore linking men’s fertility to masculinity, and to the belief that birth control is women’s responsibility alone. Finally, many of the childfree women and men I’ve interviewed tell me that they are often overlooked in policy and conversation about work/life balance. Though we all need and deserve balance, we sometimes forget that people without children also create family and have personal lives they need and want to nurture.

BJR: Does your research suggest that childlessness is different for women and men, and if so, why do you think that is?

AB: Though my research focuses exclusively on people who have made the choice not to have children, or childfree people, much of the existing research does not distinguish childfree from childless, a term that refers to people who want children but can’t or don’t for any number of reasons. In my own research on childfree people, I did find differences between women’s and men’s experiences. Women felt more pressure to become mothers than men did to become fathers, and they received more negative feedback about their choice than did men. I think that this is because of our strong cultural attachment to, and belief in, the notion of maternal instinct. We assume that women are wired to want kids, though there is no scientific evidence to support this idea. Instead, girls are taught from a very early age that motherhood is their destiny, and that it is the singular most important and fulfilling role they will have. One need only take a stroll down the “girls” aisle of any children’s toy store to see this. Boys are certainly reared to believe they will become fathers one day, but fatherhood is not presumed to be “in their nature” in the way that motherhood is for girls.

BJR: What are the policy implications of your research on childlessness?

AB: There are so many! As mentioned, one policy that needs to change is how the Earned Income Tax Credit works. Non-parents should have the same opportunity as parents to lift themselves out of poverty. In my book, I also describe how inheritance laws disadvantage non-parents in some states. Another area that I heard about over and over again in my interviews is work/life balance. Employers and policy makers must understand that the “life” part of that equation does not always mean kids — and this is true for parents and non-parents alike. And we need to think much more creatively about how we age and how we prepare for old age. This isn’t just an issue for non-parents; research shows that most parents do not have adult children who will provide intensive care for them as they age. We also should be educating children to understand that parenthood is a role best fulfilled when it is chosen — and that non-parenthood can be a fulfilling life path as well. Recently, policy makers and others have expressed concern over declining fertility rates among women born in the United States. What these conversations overlook is that our population is actually growing, and we have immigrants to thank for that. Rather that pushing people who don’t want to become parents into doing so, we should be looking for ways to welcome – not turn away – people who wish to immigrate to the U.S. Finally, there are many policy implications having to do with reproductive justice. Who gets to decide when, whether, how, and to how many children we become parents? These are questions that seem to be on everyone’s mind these days, and how and by whom they are answered has very real consequences for everyone, including childfree people.

Barbara J. Risman is a Distinguished Professor of Sociology in the College of Liberal Arts & Sciences at the University of Illinois at Chicago.  She is also a Senior Scholar at the Council of Contemporary Families.