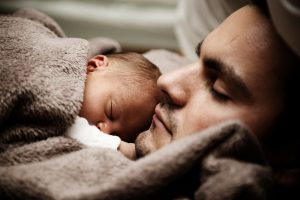 A study in the Journal of Labor Economics of Quebec’s recent non-transferable parental leave for fathers demonstrates just how effective this generous benefit is in getting fathers more involved at home. With new benefits, fathers increased their participation in parental leave by 250 percent. In households where men were given the opportunity to use this benefit, fathers’ daily time in household work was 23 percent higher, long after the leave period ended. Background and details of economist Ankita Patnaik’s innovative study are provided in this blog post.

The United States lags woefully behind many nations in family-friendly work policies, especially those that allow fathers to take time off to be with their children. Worldwide, more than 95 countries ensure that fathers have access to paid parental leave after a child is born. In the United States, by comparison, fathers have no such guarantee of paid leave. Some fathers are eligible for 6 weeks of unpaid job-protected leave through the Family and Medical Leave Act (FMLA), but the lack of financial compensation makes using this option unaffordable for many families.

Getting fathers involved in childcare early on has been shown to improve children’s cognitive outcomes, strengthen the father-child bond, and increase fathers’ life satisfaction. It is also is a critical next step in promoting gender equity in the workplace as well as at home. Unfortunately, even in nations where fathers have the right to paid leave, take-up rates are often low, because fathers worry about the impact on their finances or their career. Canada offers an ideal case study on how the take-up rates and impact of paternity leave can be improved by carefully designed public policy.

Throughout Canada, every mother is entitled to a year of unpaid job-protected leave after a birth, and every father to 37 weeks of unpaid job-protected leave. Eligible parents can then convert this leave into paid leave through benefit programs run by the government in the form of social insurance. From 2001 to 2005, eligible parents in all Canadian provinces could claim parental leave benefits from the government through the Employment Insurance (EI) Program. Mothers had access to “maternity leave” reserved specifically for them, and gender-neutral parental leave that was technically shared with fathers. Fathers had access to benefits through this “shared” parental leave – but they could transfer the leave to their wives, and leave-takers were compensated with just a little over half their wages up to a strict cap, so household incomes were hit hard when fathers took leave. As a result, fewer than 20 percent of fathers in Canada participated in paid parental leave under the EI program.

In 2006, however, Quebec left the EI system and established the Regime Quebecois D’assurance Parentale or the Quebec Parental Insurance Plan (QPIP). The new scheme made more men and women eligible for parental leave benefits, increased the replacement rate from 55 percent to 70 percent of income, raised the cap on maximum benefits from $412 to $767 per week, and established a 5-week “daddy quota” of paid leave for fathers. Quebec is now the only province in Canada in which fathers enjoy an individual and non-transferable right to parental leave. This reform provided me with a unique opportunity to study how a daddy quota affects paternal leave-taking, as well as whether such leave-taking has long-term effects on the way fathers and mothers divide paid employment and household work.

To investigate the effects of QPIP on parents’ leave behavior, I analyzed data on benefit claims from the 2002-2010 rounds of the Employment Insurance Coverage Survey (EICS). Using a regression discontinuity approach, I identified the local mean impact of the new program. This method essentially isolates the difference between births that only differed in the exact timing of birth: i.e. comparing a birth that happened on December, 31st 2005 (under the old EI program) to an otherwise-identical birth that happened on January 1st, 2006 (under the new QPIP program).

The introduction of QPIP had a dramatic impact on fathers’ behavior, increasing the participation rate of eligible fathers from 21.3 by 53 percentage points – a jump of 250 percent. In addition, the duration of paid leave taken by fathers increased by 150 percent. Before the reform, the average Quebecois father took only 2 weeks of leave. Today he takes the full 5 weeks allocated to him by the quota. By contrast, in the Canadian provinces that have held on to the EI program, fathers’ leave participation remains abysmally low: Less than 1 in 5 fathers take any paid parental leave. I did not find any immediate effect of QPIP on mothers’ leave behavior – but over the years Quebecois mothers’ leave participation did rise by about 16 percent.

Fathers changed their leave behavior much more substantially in response to the QPIP reform than did mothers, both in absolute magnitude and relative to their respective baselines. This strongly suggests that a “daddy-only” label is effective, because the other reform features of QPIP cannot explain this disproportionately larger response from fathers. First, the vast majority of fathers were already eligible for leave under the criteria of the old program (600 hours of employment in the last year), so QPIP’s lowering of the eligibility criteria predominantly affected low-income women. Second, increased income replacement did make it easier for fathers to take leave, but mothers also experienced the same increase in benefits. Economists would expect mothers to respond more strongly to increased benefits for two reasons – (i) women’s labor supply is known to be more sensitive to wages than is men’s, and (ii) mothers tend to earn lower incomes. Since the benefits are capped, this means QPIP effectively offers lower-earners a bigger relative subsidy for taking leave.

Prior to the QPIP reform, very few families in Quebec used all the leave to which they were entitled. In fact, more than 60 percent of families left a full month or more of leave unused, even when the fathers could have used some of it. Thus, it appears that there is something about the “daddy-only” label that especially encouraged participation from fathers. This could be because the label reduced stigma against fathers taking leave, making it appear to be a normal expectation. It could also be that giving fathers an individual entitlement emboldened them to request leave from their employer or made them feel guilty about not using this generous allowance to bond with their baby. This is important for future policy design, as it suggests that labeling may play an important role in influencing program participation.

Are there lasting effects of paternity leave?

To understand the long-term effects of paternity leave on household dynamics, I also investigated whether the increase in fathers’ leave-taking under QPIP had an impact on the household division of labor 1 to 3 years after the parental leave period ended. I used time-diary data from the 2005 and 2010 rounds of the General Social Survey, which provides incredibly precise and accurate measures of the minutes spent per day by mothers and fathers in various kinds of paid and unpaid work.

My treatment group comprised parents surveyed in 2010 in Quebec who had a child since QPIP was introduced. My control groups comprised parents in other Canadian provinces, parents surveyed in 2005, before the reform, and parents who may have been surveyed in 2010 in Quebec but whose children were a little too old to have been born under QPIP. The identification strategy was to isolate the difference between being exposed to the QPIP program (with a more than 80 percent probability the father took leave) versus being exposed to the EI program (with a less than 20 percent probability the father took leave).

I found strong evidence that by altering the initial experience of parental leave, QPIP had a large and persistent impact on gender dynamics within households even years after the leave period ended, encouraging movement toward a dual-earner, dual-caregiver model wherein fathers and mothers contributed more equally to home and market production. In the long term, mothers who experienced a birth under QPIP spent more time in paid work, spent more time physically at the workplace and were more likely to be full-time employed, compared to their counterparts who experienced a birth under the EI program instead. In the long term, the men who became parents after the introduction of the QPIP spent 23 percent more time in non-market household work, compared to their counterparts who had become parents under the EI program. Fathers exposed to QPIP spent approximately a half-hour more time present in the home per day, while mothers spent a half hour less in the home per day. Women who gave birth under the QPIP program actually increased their time in non-market household work by 9 per cent, but they reorganized that time, spending less time on housework and more time devoted to childcare. Overall, the introduction of the QPIP program was associated with a clear pattern of reduced sex specialization among households, without a reduction in total time spent in childcare.

Why should we care?

Studies by the Families and Work Institute reveal that American men now report higher levels of work-family conflict than do women. And when Ellen Galinsky, President of the Institute, surveyed children of dual-earner parents about their views, she found that they were more likely to think they didn’t get enough time with their father than with their mother.

Getting more fathers access to family leave would be good for the men, good for their children — and, my research suggests, good for gender equity at work as well as at home. Maybe it’s time for an affirmative action program for dads when it comes to parental leave. The experience of Quebec suggests that it can work.

Anikita Patknaik is a researcher at Mathematica Policy Research and can be contacted at ankitapatnaik01@gmail.com. This research was funded by Cornell University.