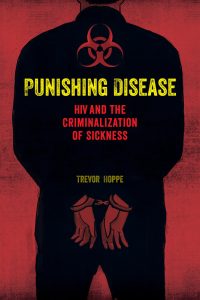 arolina at Greensboro, and recently published the book Punishing Disease: HIV and the Criminalization of Sickness.  The book traces the rise and application of criminal laws used to prosecute people living with HIV in the United States, typically for failing to disclose their status to a sexual partner.  I recently interviewed him about his book.

AK: Besides HIV and related behavior that you focus on, have other sexual behaviors and diseases been criminalized in recent United States history, and are these laws disproportionately enforced among certain populations?

TH: The book traces the rise of HIV-specific criminal laws in the 1980s and 1990s, linking that shift towards criminalization to the broader war on crime and particularly the war on drugs. AIDS unfortunately coincided with a massive expansion of the carceral state through Ronald Reagan’s presidency and it was seized upon by evangelical conservatives as a harbinger of moral decline. That made for a unique and deeply punitive response to this epidemic that has no parallel in history or in the years that have followed. During World War II, many states did pass venereal disease statutes, mostly to target prostitutes who were viewed mistakenly as responsible for the spread of syphilis. However, those laws featured misdemeanor penalties and there’s no evidence I could find that that they were widely used.

Recently, states have been moving to expand their felony HIV-specific criminal laws to include other diseases, particularly Hepatitis C. To date, only a handful of states have done so and it’s not clear that they will be widely utilized by prosecutors, as that disease is spread primarily through the sharing of needles, and drug users are not especially likely to call the police to report a needle-sharing partner. By comparison, the sexual transmission aspect of HIV more readily lends itself to a criminal justice response, since the HIV-negative partner can more readily claim victimhood in a criminal courtroom.

AK: You found that lawyers and judges often had very little medical understanding of HIV and how it is transmitted, leading to legal arguments that were inaccurate, but compelling. Did these inaccuracies allow for anyone to appeal their convictions?

TH: As is the case in the criminal justice system more broadly, most defendants charged under these statutes plead guilty. Once you plead guilty, it’s difficult if not impossible to turn back and show cause for an appeal. Defendants take pleas to avoid the much harsher penalties that come with taking your case to trial. My analysis finds, for example, that male defendants at trial received an average prison sentence of 153 months versus an average of 77 months for male defendants who plead out. Further, there is no evidence that any defendant charged under a felony HIV-specific criminal law in the United States has ever been acquitted at trial. The only cases that do not result in conviction are the rare few that are dismissed, usually because the accuser does not show up to testify. In this context, appeals are few and far between and those that have proceeded are almost universally unsuccessful.

That said, there are many cases I encountered that would appear to a casual onlooker to be ripe for appeal—such as the case of a Michigan stripper convicted for giving a lap dance (the prosecutor claimed the prohibited sexual penetration involved the client’s nose). But in her case and countless others, defendants chose to plea.

AK: If someone does not know their HIV status at the time they expose somebody else, can they be prosecuted under these laws, and if not, do these laws then encourage avoiding HIV testing so that individuals can avoid legal issues? What would be a better policy that could more effectively encourage testing and disclosure of HIV to sexual partners?

TH: No. HIV-specific laws require that a person be aware of their HIV-status. Advocates often criticize these laws on the basis that they discourage HIV testing. I don’t think there’s good social science evidence to support that claim. Most people who are not currently living with HIV do not know that these laws exist. There are far stronger arguments for demanding legal reform. For example, these laws are extremely broad and can be used to prosecute harmless behaviors, such as spitting, biting, or in at least once case, even a lap dance. The crime is failing to disclose before any sexual contact, whether or not that contact posed a risk of transmission. To this point, less than 10 percent of cases involve an allegation that defendant transmitted the disease to their partner. This is a dangerous precedent. Should partners suffering from noncommunicable diseases, such as cancer, be required to disclose? No. We can obviously recognize that policy intervention as ludicrous. The only reason we can’t say the same for HIV laws is that our vision is clouded with stigma and, too often, obfuscated by ignorance. It is terrible policy to send people to prison for years or even decades for nothing more than causing a sexual partner to experience irrational and, in most cases, unwarranted psychological duress. The best science we have today says that people living with HIV who are on treatment and have a suppressed viral load cannot—cannot—transmit the disease. It’s time for most Americans to wake up and rethink everything they know about HIV. The disease has changed. The laws, unfortunately, have not.