Not All Stepgrandparents are the Same: Long-term Versus Later-Life

Although many older Americans have had long marriages, the proportions of Americans over age 50 who have been divorced and remarried have increased substantively over the past 25 years. In fact, individuals in the early ‘baby boomer’ cohort (born between 1946 and 1955) have divorced and remarried more often than any other age cohorts. It is not surprising, therefore, that many multi-generational American families include stepgrandparent-stepgrandchild relationships. This is relevant to multi-generational relationships and perhaps to the future care of these stepgrandparents.

The differences between each pathway have been theorized to result in relationship differences. Long-term stepgrandparents’ are in relationships with stepgrandchildren because they became stepparents when their stepchildren were young – years before those stepchildren reproduced and made them a stepgrandparent. In this figure, Jay is a stepgrandfather to Meg. Jay married Laura in 1994, and Colin became his 8-year-old stepson. As an adult, Colin married Kayla in 2014, and Kayla gave birth to Meg two years later. Jay is a long-term stepgrandfather. As Meg grows up, she will always have had Ian, Laura, and Jay as grandparents on her father’s side of the family (for simplicity, we ignore Kayla’s family tree in this illustration). Jay was a member of Meg’s family long before she was born. 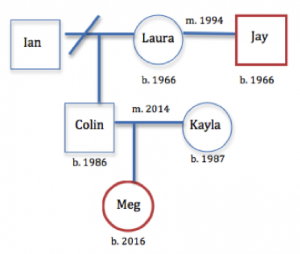 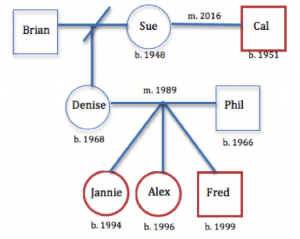 The stepgrandchildren did not remember a time when their stepgrandparent had not been a part of the family. Similar to findings from previous research, our results suggest that contextual factors, namely the timing of life events and transitions, duration of key family relationships, and opportunities for intergenerational interaction (e.g., co-residence, affinity-building), matter tremendously for if, how, and to what extent, intergenerational steprelationships are developed, maintained, and associated with caregiving and support exchanges, particularly in later-life.

This study has moved beyond describing stepgrandparenthood pathways to exploring underlying processes in intergenerational relationship building. Relationship quality among stepgrandparents and stepgrandchildren may vary widely, regardless of pathway. We have illuminated here the dynamics by which these distinct types of intergenerational stepfamilies diverge. Researchers and practitioners who work with older stepfamilies can utilize this knowledge to better think about, work with, and support stepgrandparents in later life. For researchers, knowing about pathways to stepfamily status (i.e., “How did they get here?”) provides hypotheses or assumptions to explore. In future studies of stepgrandparents, we encourage researchers to consider and attend to structural pathways, as the variability of stepgrandparent “types” is often an overlooked, yet important, distinction. For practitioners, understanding if, how, and to what extent stepgrandchildren’s relationships with stepgrandparents impact both upward and downward exchanges of social support, particularly as stepgrandparents age, can be useful in working with families to create care plans for older adults in later-life. Issues of who will care for frail stepgrandparents can only be addressed effectively by an understanding of the diversity of multigenerational stepkin relationships. Moreover, understanding pathway implications to stepgrandparenthood can enhance science and practice with older step-couples. Our findings illuminate expectations about new partner involvement in family life following transitions such as death, divorce, and remarriage.