This column is another in the series of articles based on the new Handbook of the Sociology of Gender  edited by Barbara J. Risman, Carissa Froyum and William Scarborough. 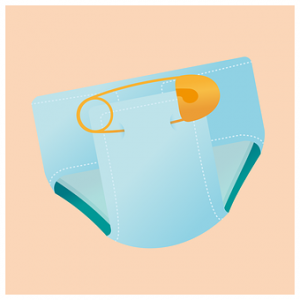 What do diapers, depression, and mothers have in common? That may seem like a trick question but the answer has implications for American social policy. Middle-class parents simply take for granted that diapers cost money, one of the many expenses of having a baby. But for poor mothers, who are often single parents, diapers, or rather running out of them, becomes a crisis that can trigger psychological stress, perhaps even postpartum depression. While parents are raising the next generation of American workers, we continue to ignore their needs, and pretend that every family has enough breadwinners to cover their basic necessities. But we know that single mothers, often struggling to live in poverty, face great obstacles. Our social safety net doesn’t provide them with security, and the jobs available to women without college degrees can’t support their families, even if they work so many hours a week they barely see their children. Perhaps poor mothers are the women in our society that are most disadvantaged by gender inequality.

To illustrate this, we introduce you to Patricia, a 32-year-old mother of three. She receives cash aid on the 2nd of each month and immediately buys the 120-count box of store-brand diapers at her local supermarket for $30. “It’s the thing we buy first because it’s the thing we can least do without,” she explained. Though she is grateful that the cheapest diapers do not give her daughter Sofia a rash, she worries that they hold less and leak more. Patricia stretches the box as far as possible. She lets 18-month-old Sofia go without diapers at home, closely monitors and minimizes Sofia’s liquid intake, rarely leaves the house, and “prays she doesn’t get sick because that means more diapers.” When that box runs out, Patricia can usually scrounge up enough change for the smaller $4.25 pack by collecting cans, selling some food stamps, or breaking her four-year-old son’s piggy bank with a promise to replace it. When she cannot, Patricia uses paper towels secured with duct tape. A victim of domestic abuse, Patricia has post-traumatic stress disorder and often goes without food, toilet paper, and tampons to save diaper money because she told Randles: “The kids come first. Providing those diapers means I’m a good mother who keeps them away from my trauma and money problems.”

Patricia’s struggle is not rare. Diaper need—lacking sufficient diapers to keep an infant dry, comfortable, and healthy—is an often hidden consequence of poverty that affects one in three families in America. A Yale University study in 2013 found that mothers like Patricia who don’t have enough diapers for their children were almost twice as likely to struggle with postpartum depression. Though the Yale study could not determine if diaper need caused post-partum depression, mothers Randles recently interviewed help us understand the connection. As Trista, a 28-year-old mother of three confided, “I experience extreme anxiety when I use a diaper. It’s worse than worrying about food because I can always eat less, be creative in the kitchen, and go to food banks. But when you run out of diapers, your child can’t do one of their most basic human things in a dignified and clean way. It more than anything makes me feel like a horrible failure as a parent.” Trista sold her blood plasma twice a week for four months solely to buy diapers for her two youngest children.

Forty-five percent of U.S. children younger than three—5.2 million—live in low-income or poor families that struggle to provide diapers as a basic need of early childhood. Yet, for the most part, U.S. social policy does not recognize diapers as a necessity. Diapers are categorized as luxury “unallowable expenses” under public programs that provide food for young children, including the Supplemental Nutrition Assistance Program (SNAP) and Women, Infants, and Children (WIC). Though parents can use welfare cash aid for diapers, the $75 average monthly diaper bill would alone use between eight to forty percent of the average monthly state benefit. Only one state—California—currently offers diaper vouchers for welfare recipients, and most states still tax diapers based on the logic that, unlike drugs such as Viagra, diapers are not medically necessary.

This oversight is not unique. Most policy in the United States ignores the bodily needs of women and children. Most states also still tax feminine hygiene products. Diaper need and how mothers like Patricia and Trista manage keeping their babies clean and dry are deeply gendered issues. Mothers do most of the physical labor of diapering. Beyond this, poor mothers are more likely to be single mothers, and so do most of the planning and emotional labor for their children. But even mothers with partners told Randles about the stress of the cost of diapers and the work of managing diaper need. When Randles talked to middle-class mothers about how many diapers they had on hand, they casually responded with answers like, “a few boxes in the closet, an extra pack or so in the car, and drawers full near each of the changing tables.” Poor mothers were more likely to respond as Patricia did when she said, “I have seven in the house, two in my purse, and one that I’ve hidden in case of a dire emergency. Based on how often my daughter goes to the bathroom and the likelihood that she’ll pee twice as often as she poops, I know those ten diapers will last me exactly two days before I run out and have to figure out how to get more.” This degree of specificity was perhaps most telling about how diaper need can cause anxiety for poor mothers. The problem is not just that they have fewer diapers, but the amount of stress involved in calculating, saving, and sacrificing to stretch limited diaper supplies as far as possible. Diapers are not a luxury. The taken-for-granted ability to buy ahead, stock up, and not give much thought to running out certainly is.

The near political invisibility of diaper need and mothers’ efforts to manage it reflect what Risman calls the gender structure, or how gender inequality affects all aspects of our of  lives. Women’s continued primary responsibility for unpaid care, including diapering, remains a linchpin of inequality. As a society we continue to devalue the care of others. For poor mothers, most likely to be single, the social, economic, and political devaluation of care creates an overwhelming burden. By failing to account for the real needs of families, parents, and children, social policies enforce gender inequality and lead to children’s suffering. In the United States, we pretend as if individual parents alone should be responsible for children. Parents are tasked with meeting all the practical and emotional needs of families. But we need a village to support today’s children, especially those born into poverty. Policies intended to support families must take into account that mothers, often by themselves, are the ones struggling to keep their children fed, dry, clean and clothed. The invisibility of the need for diapers provides a clear case of how ignoring gender inequality in social policy can have disastrous effects for women, and their children. We’ve successfully confronted similar problems before through targeted gender policies such as WIC that recognize the basic needs of mothers and their families. For the sake of Patricia, Trista, and the millions of mothers like them, it’s time we do it again with diapers.