Is The Gender Gap in Politics Changing? 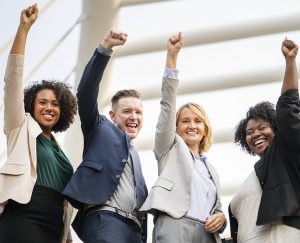 In an opinion piece I recently wrote for CNN on the midterm election results, I argued that although the gender gap in support for Democrats remains huge, what should really worry the GOP is that the gap is narrowing. I add new evidence about the midterm results in this blog.

This November, American women voted for Democrats over Republicans by an unprecedented margin of 19 points, twice the margin by which they favored Democrats in 2016. The gap between male and female voting preferences was 23 points. Yet this gender gap was only one point higher than in 2016, because although women have moved faster and further than men, this November a significant section of men moved in the same direction – away from the racism, sexism and fear-mongering promulgated by Trump and his enablers.

Focusing narrowly on the size of the gender gap over the past two years not only understates the setbacks the GOP has experienced with men. It also obscures significant changes in the racial and class make-up of Democratic voters. In 2016, the Democratic advantage with female voters was largely due to the votes of nonwhite women. Overall, white women favored Republicans by 12 points. Only a bare majority of white female college graduates (51 percent) voted for Hilary Clinton; a large majority of white women without a college degree chose Trump. This November, by contrast, 59 percent of college-educated white women voted Democrat, and although the majority of white working-class women still voted Republican, they increased their support for Democrats by 13 points, enough to create an even split in votes for Democrats and Republicans among all white female voters.

Meanwhile, in the highest youth turnout in 25 years, more than two-thirds of 18-29 year-olds voted Democratic, producing a record-breaking victory margin of 35 percentage points for Democrats.

Breaking down the vote by age sheds a different light on white voters’ preferences, countering the idea that whites are inescapably tethered to the GOP. One 2018 exit poll found that whites aged 18 to 29 favored Democrats by a margin of 13, while whites aged 30 to 44 moved from a majority for Republicans in 2016 to an even split. A different study showed whites aged 30 to 44 moving from a 21 point margin for Republicans in 2014 to a 9 point margin for Democrats in 2018.

For those of us concerned about how best to counter the newly emboldened racists and misogynists in America, the midterm results are not all good news. In Georgia, white women without a college degree voted for the Republican gubernatorial candidate, Brian Kemp, at a higher rate than their male counterparts. In fact, a higher percentage of these women voted for Kemp than they did for Trump two years earlier.

Additionally, in several conservative states the polarization that elsewhere turned many voters off the GOP resulted in gains for rightwing candidates, with rural, conservative, and evangelical voters mobilized by issues such as the Kavanaugh confirmation hearings. In Missouri, the incumbent Democrat Claire McClaskill went down to defeat after losing ground in every rural county compared to her previous two campaigns. In North Dakota and Texas, significant numbers of voters said that the candidates’ position on Kavanaugh was an important factor in their vote, and of those who said this, more than 60 percent voted Republican.

Even where Democrats won big, the “blue wave” is unlikely to wash away the economic, racial, and gender inequalities that long predated Trump and his Tea Party supporters. Suburban liberals tend to be supportive of same-sex marriage, reproductive rights, and equal opportunities for women and racial minorities, but reluctant to tamper with the educational, financial, occupational, and regulatory institutions that perpetuate their advantages in a stratified society.  As Lily Geismer points out, they are especially concerned with preserving higher property values and lower taxes. Thus, while voters in all 7 Congressional districts of the formerly solidly Republican Orange County, CA, elected Democrats, they also voted for an initiative to repeal a gas and diesel tax designed to support public transportation (an initiative that failed statewide) and against a measure to make housing more affordable.

Nevertheless, the elections show that people’s views can change and that we should not write off everyone who voted for Trump or whose anxieties about social and economic change have fanned their racist or sexist biases. We will never win over hardcore racists or misogynists, but in many people, racial and gender prejudices coexist with a more general endorsement of fairness, and their biases can be overcome — or at least neutralized — by the kind of persuasive efforts that so many candidates and progressive activists put into this election. As evidence, consider Georgia, where gubernatorial candidate Stacey Abrams – a Black woman – did better among college-educated white women than Hilary Clinton did in 2016, winning 43 percent of their vote, compared to the mere 34 percent that Clinton garnered. And although voters in Florida, Idaho, Nebraska, and Missouri elected Republicans, they voted respectively to restore voting rights to an estimated 1.4 million people with prior felony convictions, to expand Medicaid coverage for low-income residents, and to reduce partisan gerrymandering.

Furthermore, while race-baiting, immigration fear-mongering, and hostility to feminism have fired up conservative Republicans, they have moved many Democrats to be more supportive of racial and gender justice than they were in the past. And many people who tolerated racism and sexism in the candidates they voted for in 2016 seem to be rejecting such candidates today. Political scientist Brian Schaffner found that in 2016 a voter’s approval or disapproval of hostile sexism had little predictive power on whether he or she voted for a Republican House candidate. But this November, Schaffner reports, “less-sexist voters punished Republican House candidates in a way they did not in 2016.”

Similarly, while the 2016 Trump campaign benefited from an influx of new white voters mobilized by hostility to immigrants, Blacks, and Muslims, in 2018 the GOP did not win enough new converts on these issues to counter the loss of voters they offended. Evidently the GOP has already cornered the market on racists and misogynists. It is now losing ground among people whose prejudices, while still real, are not so carved in stone.

Stephanie Coontz teaches history and family studies at The Evergreen State College in Olympia, WA. She also serves as Director of Public Education at the Council on Contemporary Families, a non-profit, nonpartisan association of family researchers and practitioners based at the University of Texas at Austin. The author of 7 books on families, marriage, and gender relationships, she has published dozens of articles in the NYT and elsewhere, as well as in scholarly journals such as Journal of Marriage and Family. She is the recipient of CCF’s first and only “Visionary Leadership Award,” The Families & Work Institute’s “Work-Life Legacy” Award, and other awards from the American Academy of Pediatrics, the Illinois Council on the Family, and the Association of Family and Conciliation Courts.