Queer Kinship in Taiwan: An Interview with Amy Brainer 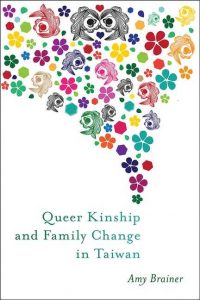 Amy Brainer is an Assistant Professor of Women’s & Gender Studies and Sociology at the University of Michigan-Dearborn. In this blog I interviewed her with three questions about her new book, Queer Kinship and Family Change in Taiwan (2019, Rutgers University Press).

BR: You write that stories about lesbian and gay successes were used both by the social movement for parents of LGBT children and by some of your respondents as well. Can you discuss the ways in which that seemed to have both strengths and weaknesses for your respondents?

AB: Many of the heterosexual parents that I spoke to were worried about the economic implications of being gay or transgender. Social stability and class mobility were major touchstones in our interviews, in support group meetings for parents and for queer and trans young people thinking through family issues, and in other places that parents gathered. These parents viewed normative signs of success, like a college degree and a stable job, as particularly important for children who do not conform in other areas. They used lesbian, gay, and (on rarer occasions) transgender success stories in ways that were often personally empowering but politically limiting. I saw queer and trans activists struggle with this: How to welcome heterosexual family members into the movement without compromising their more radical queer ethics?

In general, we think of normativity as benefiting middle class lesbians and gays, and this is true in Taiwan as in many other places. But, I also caution that it is often middle class and more privileged activists and academics who have the most developed critiques of normativity. We have to be mindful not to create a new stratification system based on how non-normative we manage or espouse to be, because this will end up reinforcing the very class divisions we claim to be trying to dismantle.

BR: It seemed that you attempted to bring together two different literatures, research on gender & sexuality with the research on family change in Taiwan. Did this integration of traditions, and your research itself, provide you with any directions that you’d recommend for studying and working with LGBT families of origin in the future?

AB: Bringing literatures together sounds fantastic in a proposal but tends to be harder in practice. The gaps that exist often reflect larger epistemological and political differences. For example, demographic data are collected by the state for population management and surveillance, and queer theorists are pushing back on this. But knowing something about fertility rates, about patterns in how people create and sustain families or break away from those families, is obviously of great value for those of us who are trying to figure out what is going on with queer populations and how to support them. I think queer scholars and activists can appropriate these data while remaining very critical of methods and frameworks.

In studying and working with families of origin, we cannot simply export models based on U.S. populations to other parts of the world. This is (I hope) an obvious point but one we must continue to make. For example, in my answer above, I noted parents’ economic concerns around sexuality and gender. These are concerns that activists must address if they want to bring parents into the movement. A model that assumes parents’ concerns are primarily moral or religious (as they are for many U.S. parents) is inadequate in this context. As a second example, I point out in the book that research on trans people in families does not consider the effects of gender transition within patrilineal and patrilocal family structures – still among the most common family structures in the world. There are many new directions that open up when we step outside the narrow box of what we already know based on predominately white, western families.

BR: Can you provide some examples of how your standpoint helped shape the research project and the analysis?

AB: Ethnography is such an intimate mode of research and who we are matters a great deal. There are several parts of my biography that I highlight in the book: my race and national origin, my femme sexuality, and my family background and coming out experience. I am white, U.S. born, and employed at a North American university. The unearned privileges that come with these characteristics shaped, for example, my ability to cross borders freely and without fear to do this research and my ability to apply for grants without first checking the citizenship requirements. (The Wenner-Gren, which provided the majority of funding for this project, does not discriminate based on nationality, but many other funding agencies do.) In Taiwan, my outsiderness shaped the ways that people perceived and related to me. For example, many people invited me to spend time with them in their homes, including on holidays and other special occasions. Hospitality can be a barrier to deep understanding because when we are hosting others, we often present only our best. But it can also facilitate understanding – in this case, by giving me a glimpse of everyday family life that I might not have had otherwise.

While I was doing this fieldwork, many people asked me questions about my own family story. I am very close to my family, but our journey around sexuality has been a difficult one, threaded with periods of deep pain. This, too, shaped the research. It opened up my life to my informants in a way that, in certain cases, brought us closer. In other cases, it positioned me as a daughter in need of advice from the heterosexual parents with whom I was spending so much time. It continually reminded me of the emotional labor my informants were doing when they agreed to be interviewed. This whole experience also changed the way I approached the topics of sexuality and gender with my parents. I became more open to hearing their points of view and reasons for acting and feeling as they did. Being an ethnographer gave me tools to listen in a way I had not been able to achieve before. So as much as my biography shaped the research, the research also shaped me and my family relationships.