Cohabitation and Divorce: The Importance of Accounting for Age at Coresidence

This inflation happens because the older that couples are when they move in together with the person they will eventually marry (whether at marriage or beforehand) the less likely they are to divorce.  When accounting for age at marriage only, researchers are comparing couples who married directly at, for example, age 24, to those who moved in together at perhaps age 21 and then married at age 24.

My research argues that a more accurate comparison would compare those who moved in together at, for example, 21 (and then eventually married) to those who both moved in together and married at age 21.  When doing so, the relationship between premarital cohabitation and divorce disappears for some cohorts; and in very recent cohorts, as I show in my recent CCF report, reverses, with premarital cohabitors having a lower risk of divorce compared to couples that marry directly. In other words, the reason premarital cohabitors seem to have a higher risk of divorce is not because cohabitation causes divorce; it’s because premarital cohabitors who eventually marry select partners and move in together at earlier ages compared to other couples who marry at the same age, when they are less prepared for the roles and responsibilities that are associated with eventual successful marriages.

Figure 1: Odds Ratios for the Association Between Premarital Cohabitation and Divorce in First Marriages in Four Cohorts: The Importance of Age Controls 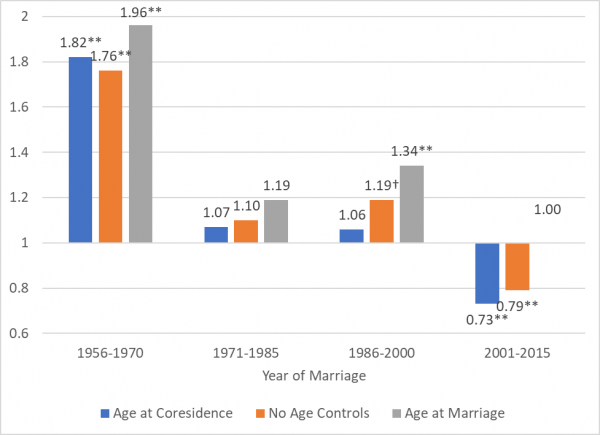 Note: Numbers calculated from the 1988 National Survey of Families and Households (1956-1985, N=3,594) and National Survey of Family Growth (1986-2015, N=9,420) using Cox regressions and based on women <36 at first marriage. Controls for raised not religious, religious attendance, race, education at marriage, mother’s education, prior cohabitations, lived with both biological parents at age 14, birth prior to coresidence, began coresidence while pregnant. Age at Coresidence models additionally control for age at coresidence and age at coresidence squared.  Age at Marriage models additionally control for age at marriage and age at marriage squared. †p<.10, **p<.01

In my new article recently published in the journal Marriage & Family Review I show that the length of time that couples live together before marriage has grown in recent decades (See Figure 2), increasing the importance of correctly accounting for the age at which couples move in together, as it grows further and further from the age at which these couples marry. 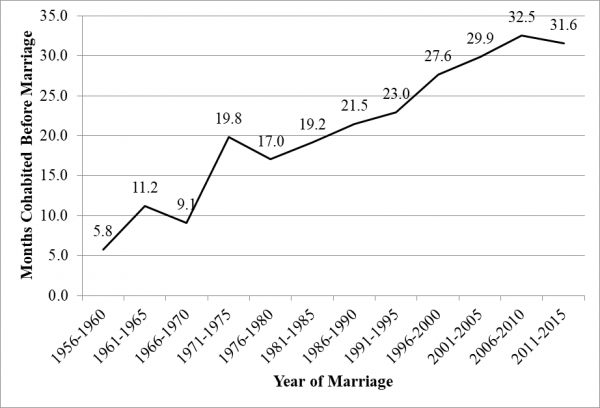 While the overall pattern in this new research of lower divorce rates in the first year of marriage after cohabitation seems plausible, accounting for age at marriage rather than age at coresidence artificially inflates the divorce rates of premarital cohabitors across all marriage durations, calling into question whether premarital cohabitation is in fact associated with higher divorce risks at later marriage durations, as found by the authors. A comparison that accounted for age at coresidence instead of age at marriage would likely have led to significantly different findings.

Arielle Kuperberg is Associate Professor and Director of Undergraduate Studies in Sociology and Cross-Appointed Faculty in the Women and Gender Studies Program at the University of North Carolina at Greensboro. Follow her on twitter at @ATKuperberg and reach her at atkuperb@uncg.edu.