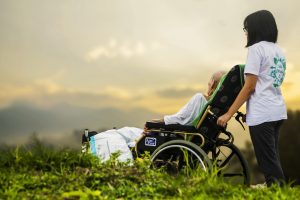 Imagine that your 75-year-old mother has fallen and broken her ankle. She lives alone in a third-floor apartment in a city not far from where you live, but this accident means that she cannot manage on her own for several weeks, if not longer. What would you do? Would you take her into your home? Would you move into her apartment to help her until she healed? Would you pay someone to come in daily to help her cook, bathe, clean house, run errands? What if your mother had broken her hip instead of an ankle? Would that change what you would do? What if she showed signs of the early stages of dementia? What would you do then?

Suppose that your mother had divorced your father when you were 10 and moved far away from you and your father. Suppose also that you and she had not been close for years. Would that affect how you answered the questions above about helping her? What if I had substituted the word stepmother for mother, would that have made a difference to you? What if this stepmother had raised you since you were 11? Would that make a difference? What if it was your aging father who broke a hip? Your stepfather?

These are the kinds of questions we have been asking Americans for over two decades in more than 20 studies about beliefs regarding intergenerational responsibilities to older (and younger) family members. The beliefs we examined may be unique to the United States, although we suspect they are not.

It might surprise you to know that in an abstract way most Americans believe that adult children have responsibilities to their aging parents and other older kin. In fact, most Americans agree with the broad statement that ‘adult children should take care of their parents when they get old’. In fact, this belief is so widespread that most states have filial responsibility laws that define younger family members’ obligations to provide care for aging parents and grandparents.

Critics of these laws, however, argue that these and other U.S. social policies about intergenerational assistance are based on outdated assumptions that family ties are always emotionally close and loving, that families are able and willing to assist older kin, and that family membership is stable. These assumptions do not reflect the experiences of many, if not most, families in the 21st Century. Families vary in the degree to which members are emotionally involved in each other’s lives and, with most adult men and women in the paid work force, there are few families with available kin to provide aid. Moreover, longer life spans and lowered reproduction has meant that there are fewer young people and more old people in extended families. Family membership is not constant; families in the United States have experienced decades of structural changes due to divorce, remarriage, and cohabitation and these changes make connections among kin more tenuous than in the past.

U.S. policy makers are therefore faced with laws and social policies that are designed for a mid-Twentieth Century extended family at a time when multi-generational family structures are becoming more complex. We began investigating whether beliefs and attitudes about intergenerational responsibilities also were becoming more complex. We began a research program to investigate how divorce and remarriage affected beliefs about intergenerational assistance to genetic and step-kin, and we examined beliefs about aid given to both older and younger family members.

Consensual beliefs about intergenerational family relationships and support are important to examine because such beliefs function as parameters within which individuals define and negotiate their responsibilities to kin, they serve as criteria to measure how well individuals are functioning as family members, and they provide a framework that people use to justify and explain their conduct to others. What people actually do in relationships is based partly on personal beliefs about appropriate actions between kin and partly on widely held expectations about what should be done regarding family responsibilities. Normative beliefs about intergenerational responsibilities also are important to understand because such beliefs influence the development and application of public policy.

Our studies were random samples drawn regionally or nationally. We used phone surveys, mailed surveys, and face to face interviews. We can’t tell you about all the findings from these studies, so instead we summarize them.

In general, genetic bonds among generations denote greater intergenerational obligations than do affinal bonds. This means, all other factors being equal, people believe that genetic kin should receive more assistance than affinal kin (step-kin or in-laws).

Genetic kinship is not enough to attribute obligations to assist. For most people genetic kinship was relevant but did not automatically mean adult children and grandchildren should help.

Beliefs about helping older kin are stronger when the older kin have helped family members in the past. For most people, adult children are obligated to help parents only if the parents had fulfilled parental responsibilities to children when they were young. Family obligation norms no longer applied when genetic kin had not observed the norm of reciprocity between generations. Genetic kinship had significance, but without past histories of mutual helping it was as if the responsibilities attendant to kinship were unimportant. Without a history of financial, tangible, and emotional support from parents, adult children were seen as having lesser debt to repay than they would have had if parents had provided more for them. Divorced and remarried older parents who were perceived to have broken the reciprocity “contract” lost their “rights” to receive help from adult children.

Intergenerational assistance is limited for relationships formed later in life. Step-relationships formed in later-life have less time to build close bonds and exchange resources, which reduced the likelihood of them being perceived as kin and having responsibilities to help each other.

For middle-generation adults, helping children takes precedence over helping elders. There is a hierarchy of intergenerational assistance, with children at the top as targets of aid.

Intergenerational assistance is conditional for most Americans. For most of the thousands of respondents in our studies, perceptions about intergenerational obligations were not automatic, but were related to several factors – relationship closeness/quality, reciprocity, resource availability, and other demands on family members’ resources were important when making judgments about helping.

Clearly, there is a lot we don’t know yet about how structural family changes affect intergenerational obligations to assist kin. This issue is relevant in societies with loose social safety nets, such as the United States. In six of our intergenerational obligation studies, we found that attitudes about helping kin were significantly related to participants’ helping behaviors in their own family networks. Our studies suggest that the final years of older adults who were less than stellar parents, stepparents, or in-laws may be in jeopardy when they need help to care for themselves. As a nation, we seem ill-prepared to deal with the rising number of Baby Boomers who are becoming our “senior citizens.”