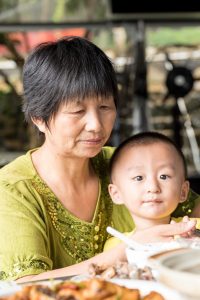 Reposted from The New York Times.

If you strolled by the playgrounds of Flushing, Queens, this summer, you would have seen throngs of Chinese immigrant women tending to their American-born grandchildren.

The moms and dads were at work, all through these long summer days. For those who cannot afford expensive day care and camps, in a country that does almost nothing to help working families care for their kids, grandparents are a lifeline. And increasingly, these grandparents are immigrants.

One of us, Xuemei, recently spent time with a Flushing family who moved here from rural China years ago. Each day the mother, father and grandfather board buses arranged by their employers to take them to work at Chinese restaurants. They leave their home around 10 each morning and return around 10 each night. In their absence, the grandmother performs all of the housework and cares for the couple’s two American-born children.

The Trump administration is now threatening those care-taking arrangements.

President Trump has been pushing for a law that would end family-based immigration — what he calls “horrible chain migration.” He even used the migrant children separated from their parents on the border as bargaining chips to try to get Democrats to agree to such a proposal, before a judge ordered them returned to their families.

In June the House defeated a plan by Representative Bob Goodlatte, Republican of Virginia, that would have restricted legal immigration through the family reunification program so that only the spouses and minor children of American citizens could immigrate — barring grandparents. A week later, the so-called compromise G.O.P. bill on immigration was also defeated. It would have effectively cut the sponsorships of spouses, minor children and parents of American citizens by about 215,000 over the next two decades, according to analysts at the Cato Institute. But Republicans haven’t given up.

The Trump administration’s determination to separate families has formed the backbone of its immigration policy since Day 1. These proposals reflect a fundamental misunderstanding of 21st-century American families and contradict the principle of family unity that has guided American immigration policy for the last 50 years. (In fact, a few weeks ago President Trump’s in-laws became American citizens thanks to the family reunification program.)

According to data from the Department of Homeland Security, the number of legal permanent residents admitted as parents of United States citizens rose to about 174,000 in 2016 from about 56,000 in 1994, an increase to 15 percent from 7 percent of all admissions.

America needs these late-life immigrants. Older parents serve as valuable resources, often helping with the down payment on homes and with child care and household chores as younger immigrants juggle tight work schedules. Their assistance is free and reliable, allowing adult children to work, improve their English and further their educations, thus integrating faster into American society.

Another woman Xuemei spoke to, a retired doctor in her 80s from Fujian Province, hardly fits the Trump administration’s pernicious stereotypes of immigrants as threatening or burdensome. When her daughter-in-law gave birth here 20 years ago, she left her job in China so that she could come to help the young couple with child care. Her son, who had stayed in the United States after receiving a scholarship to medical school, sponsored her visa.

Immigrant elders also help transplanted families maintain a sense of continuity. They may serve as cultural intermediaries by teaching grandchildren about their home country’s language, religion, food and cultural traditions. Their accounts of family histories can serve as a source of ethnic pride and personal empowerment for younger generations searching for their identities as racial and ethnic minorities.

Instead of narrowing our conception of what a family is, we should broaden it. When one of us — Stacy — was 16 and the oldest of four children, her mother died. Her father wanted to bring his niece from Chile to help the family out. But nieces didn’t count as eligible family members under the reunification program. So the family struggled along.

The support of family caregivers may be invisible to outsiders, but it is essential for the well-being of transnational families, especially in a country that lacks a system of affordable child care. The Republican plans to restrict family-based migration won’t help Americans — they will hurt Americans, by depriving many of our youngest citizens of the social, psychological and economic benefits of strong extended family ties.

Stacy Torres is an assistant professor of sociology at the University at Albany, where Xuemei Cao is a doctoral student.