Trans Kids in the 21st Century: An interview with Tey Meadow 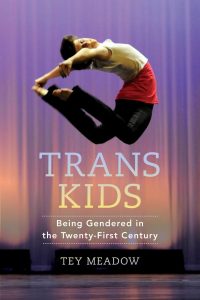 Tey Meadow has a new book  Trans Kids: Being Gendered in the 21st Century  that looks at transgender and gender creative children with supportive parents.  I recently had the opportunity to interview Tey about this fascinating new research.

What was the most surprising aspect of your ethnographic work?   Was there something you reported in the book that you hadn’t expected to find but did?

Two things surprised me about my research. First, there was no hypothesis I could make about what kinds of families would be most likely to support or facilitate gender nonconformity in their kids that held true. Some of the most radically supportive families were deeply religious, or from ultra-conservative, rural areas. And some politically liberal families in major urban centers were among those who struggled the most. The notion that there is any sort of monolithic gender culture in any of these areas is far too simplistic an idea to encapsulate the complex and competing desires and emotions these families experienced.

I was also surprised and heartbroken to learn how vulnerable some families were to violence, harassment and censure, even by the state, for simply allowing their children to be gender nonconforming. I detail a number of these stories in the book. Families with children of color, gay and lesbian-headed families and those with pre-existing relationships of surveillance with the state were the most acutely vulnerable, even in socially liberal areas. I met parents who faced false accusations of sexual or emotional abuse, or temporary custody loss and threats of physical violence; many who were too terrified to participate formally in the research, but desperately wanted other people to know this was happening. While media attention on these topics is on the rise, so too is a pernicious backlash that is worth our attention, as well.

One of the most surprising things for me reading this book was the complicated relationships between the social movement organizations founded by parents to advocate for their children and the LGBTQ social movements run by and for LGBTQ folks.  Can you explain that somewhat for our readers?

The contemporary moment for trans children simply would not be possible without the interventions of older LGB-and especially-T activist communities. The adults who pushed for visibility and acceptance at a time when being trans was unthinkable outside of tabloid journalism, who struggled to control the terms of their own engagements with psychologists and physicians, who fought the state for the right to be recognized in their affirmed genders, all of their work set the terms by which parents could recognize children as trans and secure their rights to live openly.

But the political movement around transgender children now is largely a cisgender movement, a vicarious movement of parents and adult allies, who don’t necessarily connect the worlds of these children to the idea of trans that came before. Today’s trans kids will have earlier access to transition than their predecessors, and will, as the reach adulthood, have to decide whether or not their identify with those earlier movements, or whether they want to live outside of them. Some parent I met found the imagery of earlier transgender rights abject, worried that their children would be forced to live marginal lives, or simply felt that the world had changed so much that earlier trans people’s experiences were no longer instructive. Some of these parents chose to limit their children’s access to trans adults, or to carefully curate that access, selecting out the transpeople they felt offered the most assimilable genders for their children to emulate.

I detail this at length in the book and the novel questions it raises for these communities. Trans children whose parents have access to early medical transition will be able to pass unnoticed in most situations and will have greater latitude to disidentify with trans identities and communities. How they negotiate these new questions and options will be fascinating to watch.

What is the most important societal implication of this research project?  Are there specific social policies that your evidence about transgender children and their families suggests local or state governments should implement in the near future?

This is a crucial national policy moment for trans kids, as it is for many vulnerable populations. There are republican-sponsored bills in several states that directly target these youth in ways that could be catastrophic. For example, a piece of legislation that was recently introduced in Ohio, would force school teachers and administrators to “out” youth exhibiting gender nonconforming behavior at school to their parents, even if they know that doing so would be harmful to the child. This is an unprecedented intervention into family life that could have devastating consequences for youth with unsupportive parents.

On a smaller level, my work with children and families showed me how deeply concrete policies can shape institutional cultures. Schools with well-articulated expectations for climate, with curricula that incorporate gender diversity (or at the very least don’t exacerbate it), with teacher and administrator populations that are themselves diverse, create the best learning environments for trans and cisgender students alike. Organizations around the country have compiled useful resources for educators who want to bring their schools in line with best practices in this area.