Save it, Store it, Reread it, or Throw it Away? What our Love Letter Curatorial Practices Say about Cultural Values Surrounding Romance and Technology 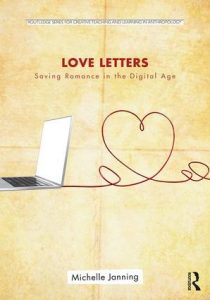 Inevitably when I tell people that I study love letters and technology, someone participating in the conversation laments the way that texting and instant messaging have lessened the depth and thoughtfulness of love letters in today’s romantic relationships. A text is not a substitute for a handwritten note that takes time to write and symbolizes dedication to a relationship, they argue. But then another voice chimes into this conversation, offering something like this: “I love that my girlfriend and I can text each other little love notes. It’s quick, it’s in real time, and it makes me feel close to her even if she’s far away.”

A few years ago I was cleaning out a basement cabinet and found a box of old paper notes and love letters from high school, college, and graduate school. I brought the box upstairs and began rifling through the paper. My husband walked into the living room, saying to me as I sat amidst a pile of spiral notebook paper bits, “We started college before there was email and we ended college when the World Wide Web came into existence. I wonder if we’re the last generation of letter writers.” Around the same time I talked with a couple women about their love letters – one woman in her twenties who had saved texts from romantic partners in a memo folder on her smartphone, and one woman in her forties who had saved paper letters from her (now) husband that they had exchanged while studying abroad in college. Because of these conversations, I began to wonder whether gender and generation mattered in how people thought about the role of technology in romantic communication.

It is precisely these varied reactions – lamenting the loss of thoughtfulness, praising the access to real-time communication, and wondering about the role of rapidly changing technology on relationships for people from different groups – that my new book, Love Letters: Saving Romance in the Digital Age (Routledge 2018), dissects.

Through my own survey data, stories, and a rich weaving together of others’ research from a variety of academic disciplines, I tell the story not of the content of love letters exchanged on paper and via digital devices, but rather what people do with the love letters once they have them, and whether their format as digital or paper matters in terms of their meaningfulness to their owners. In other words, I study the curatorial practices of saving, storing, revisiting, organizing, and throwing away love letters. I do this because the objects in our lives – our material culture – not only impact our behaviors (think about how your smartphone shapes your behavior when it rings or dings during a class or concert); they also symbolize what we cherish or despise. More importantly, our actions surrounding these pieces of material culture require different kinds of bodily and emotional work depending on the relationship and on the digital or paper format – labor that I discuss in this podcast from The Verge. To save a thousand texts in a special folder requires not only the physical work of creating that folder by swiping and typing or by folding and stuffing, but also the emotional labor of discerning whether these saving practices are worth it given the type of relationship they symbolize.

My research reveals a few important findings. First, people overwhelmingly prefer saving paper love letters over digital ones, a pattern that spans all age groups (even among younger individuals for whom digital communication is more prevalent). But despite the preference for paper, people are more likely to use digital means to communicate to lovers. Thus, there is a mismatch between what people do and what they prefer their partners do. For people of different ages, this may stem from different causal mechanisms: for older individuals, they may prefer something from their past that they witness lessening; for younger individuals, they may prefer something they imagine as better despite not having experienced it much in their own lives. In both cases, there is a calling forth of a past image of love letters that is used to judge today’s practices.

Second, men and women differ in their love letter curatorial practices, especially with paper letters. Women are more likely to save love letters than men, but men look at the love letters they save more frequently than women. Women tend to store their love letters in, under, and behind things (e.g., in a drawer, under a bed), while men tend to store them on things (e.g., on a desk or bulletin board). Men and women are similar, as are people of varying ages, in the reasons why they may revisit love letters: people are as likely to look at a saved love letter intentionally (to reminisce fondly or remind themselves of what to avoid in the case of a negative relationship) as they are to stumble upon them accidentally (which is what I did when I found my box of old paper letters in my basement). And people across age and gender categories who get rid of love letters may do so for several reasons: to rid themselves of bad memories, to declutter, or to prevent others from seeing what they perceive to be highly private (often sexual) messages.

Most importantly, the underlying message of these and other findings in the book must be understood in light of social inequalities that move beyond individual preferences. In particular, the calling forth of a nostalgic image of handwritten paper love letters sent and received through the mail not only must be historically situated, as lots of epistolary research shows (mail delivery as we know it in contemporary society is not really that old; people have always adjusted to newer and quicker modes of communication exchange), but also must be understood in terms of privilege. To write, send, receive, and read a love letter that looks like those images found in popular culture and the marketplace began among those with tremendous privilege: those who were white, affluent, educated, literate, and geographically located in the Global North. This image of love letters was reserved for those who were among the most elite in Western society. If there’s one thing family scholars know, to mythologize past nostalgic images of family relationships as if they were universal not only fails to be historically accurate, it also becomes the basis for inaccurate and unfair judgment of today’s varied relationships. To label someone as unromantic because they send a text message rather than sitting down at a desk for an hour to handwrite a love letter upholds an image that historically was reserved for those who had plenty of time, money, and education.

When people lament the loss of paper handwritten love letter writing, they are really lamenting the loss of a nostalgic image of romantic love that has never been universal, and that has become part of a collective view of romance that is ahistorical, inaccurate, and was available only to privileged groups. What people do with their love letters – digital or paper – depends not only on individual preferences regarding orderliness, clutter, or sentimentality, but also on people’s access and attachment to powerful cultural values that make up contemporary views of romance such as individualization, taking time in a hectic world, longevity, privacy, and keeping cherished things in a safe place. These values are not accessible equally across groups. Ultimately, I contend, despite acknowledging that digital communication has changed how we view connectedness and the type of work we have to do to manage a huge amount of information, the cultural values that tell us how romantic love should be defined are more powerful than the format our love letters take.

Michelle Janning is Professor of Sociology at Whitman College in Walla Walla, Washington. She studies the intersection between intimate relationships, domestic objects, and spaces and places, usually while cleaning out basement cabinets or looking under couch cushions. She enjoys nice pens and stationery, as well as inside jokes in texts from her husband. She is the author of The Stuff of Family Life: How our Homes Reflect our Lives (Rowman & Littlefield 2017).