What Should You Give Your Husband for Father’s Day? The best gift might be respect, trust, and an equal share of the work. 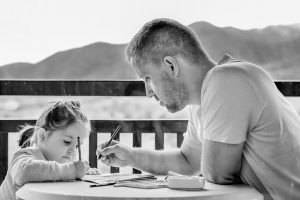 The majority of Americans today believe in equality. Nearly three-quarters of American adults (73%) say the trend toward more women in the workforce has been a change for the better. And 62% of adults believe that a marriage in which the husband and wife both have jobs and both take care of the house and children provides a more satisfying life than one in which the husband provides for the family and the wife takes care of the home. But despite real progress in men’s participation in family life, Moms usually remain the default parent while Dads help out but do not take charge. Women’s income, not men’s, is often seen as what pays for the childcare. Another recent study of American families shows that mothers multi-task more than fathers, do it more often at the office, and feel more burdened than men by having to always be doing two things at once time.

So what is going on here? Is there an international plot to maintain patriarchy, as conspiracy theorists might argue? Or are women naturally suited to housecleaning and men are just not up to the task, as so many anti-feminists claim? Are today’s husbands really Neanderthals that come home from a long day’s work, drink beer, and expect their wives to wait on them?

Perhaps my own experience loading the dishwasher a few months ago can provide some clues. I don’t do housework very often. As a university professor, researcher, and author who always has writing deadlines looming while I travel to conferences and lectures, both in the US and overseas, I’m ridiculously over-scheduled. My husband is semi-retired, works from home and so with his flexible schedule, spends a lot of his time following me around the world. He doesn’t pick up the slack in our home; he runs our household. One Saturday morning after being served fabulous French toast, I insisted on cleaning up for a change. Within minutes, I was lecturing him on how the dishes already in the dishwasher weren’t rinsed well enough, or stacked neatly. He smiled at me and said, “So when was the last time you ate on a dirty dish?”

If I can find myself, without thinking twice about it, lecturing my husband on how to load a dishwasher, when I haven’t touched a dirty dish in months. How hard must it be for women who’ve been doing the dishes and the meals and taking care of the kids to accept their husbands as competent partners? Or even as partners who might become competent once they were responsible for the tasks?

I have no doubt there are men out there who are simply sexist self-serving narcissists who want wives to do the second shift so they drink beer, play golf, and watch TV. But are there not also some women who just cannot stop themselves from lecturing our partners on how to launder clothes, stack the dishes, put away the groceries and dress the children. Many moms I have talked with even leave lists of what to put into the lunch box when they travel for business–as if their husband isn’t smart enough to figure out what to put between two slices of bread. Why would these successful women have married men they can’t trust to make a sandwich or pick out a toddler’s outfit? The assumption of male incompetence at home has the same result as expecting women to be incompetence at work. It makes the recipients less likely to take on responsibility, to do the job well, or to show initiative.

Perhaps part of why men aren’t stepping up to the plate as equal partners is because women don’t let them. It’s not that women don’t want their husbands to share the job and the joys of parenting. Research shows clearly that they do, and that there are even benefits in the bedroom when people feel their marriage is fair. But we women have set the rules for how housework is done for so long, and often take so much pride in our mothering identities, that we don’t leave enough room for fathers to be equal players. Perhaps mothers are worried about what the neighbors will think if their son’s outfits are not matching, or their daughter’s shirts have stains? Is such shame worth undercutting men’s responsibility for domestic labor? Surely, if a man was worth marrying, he’s talented enough to wash dishes, make play dates, and clean the toilet.

So for Father’s Day, let’s show dad’s some respect. The best gift might just be to respect your partner enough to let him load the dishwasher without comment, and take care of the kids without fearing his your evaluation. Here ’s a gift idea for wives on this Father’s Day: stop giving directions, stop running the show and then resenting that you carry the load of the family work. Give Dads a break this year for Father’s Day. Trust them enough to lean out at home. And if you have to occasionally eat from a dirty plate, as I do, it’s worth it. Let your guy lean in for a change.

Barbara J. Risman is a Distinguished Professor of Sociology in the College of Liberal Arts & Sciences at the University of Illinois at Chicago.  She is also a Senior Scholar at the Council on Contemporary Families.