Black Marriages in America: An interview with the authors of Marriage in Black 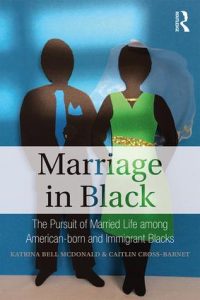 Marriage in Black: The Pursuit of Married Life among American-Born and Immigrant Blacks (Routledge, 2018) by Katrina Bell McDonald and Caitlin Cross-Barnet examines contemporary Black marriages in the United States. Based upon in-depth interviews with 60 couples, they examine the historical and continuing impact of racial inequalities in the United States on Black marriages, distinct features of Black marriages, and the diversity among Black marriages. Their interviewees included African American couples, immigrants from Africa and the Caribbean, and White American couples. I enjoyed reading the book and recently had the opportunity to interview the authors.

AK: What are some of the ways that you found racial inequalities in the United States impact Black marriages in contemporary society?

KBM and CC-B: There are so many angles to consider in response to this question. If we consider the legacy of African American life from the slave era onward, there have been enormous efforts by the state to exert social control over Black relationships. Under slavery, legal marriage was prohibited, but after emancipation, Black couples were pressured or forced to formalize their unions. The context of heterosexual marriage in the United States has historically been situated in White patriarchy, but the privilege accorded White men to support that model of marriage was never extended to Black men. Thus, you see a long history of paid employment among Black wives; married White women didn’t meet married Black women’s employment rates until the 1990s. Systemic racism is a constant for Black couples—structural barriers mean that couples have to negotiate discrimination in housing, employment, the criminal justice system, and everyday interactions with institutions ranging from government offices to the grocery store. That stress spills over into relationships and can create instability that is beyond a couple’s control. But then there also is an increasing proportion of the American Black population that is made up of immigrants. The context of marriage is different in Caribbean and African countries, but their cultural practices and meanings of marriage (in those countries as well as in the United States) don’t always conform to conventions in the United States. And then there is the question of assimilation. Institutionalized racism has historically prevented the assimilation of American-born Blacks into the full privileges of White American middle-class life, so for Black immigrants, what does assimilation mean?

AK: What other distinctive features did you find among Black marriages?

KBM and CC-B: Part of what we found is that there aren’t necessarily any universal features of Black marriage. Intersectional identities make it difficult to define “Black marriage” because individuals have many more components to their identities than race. Black families do have to confront particularly entrenched institutionalized racism, and that means there are certain problems Black couples are more likely to face or just fear—poverty, housing discrimination, incarceration. But when it comes to couples’ ideals or behavior, there are wide variations in marital ideals and practices by social class and immigration status in addition to variation by individuals, creating much more diversity among Black couples than we saw between Black couples and White couples (our sample included 14 White couples). Our sample was small—61 couples all living in the same geographic area—so there could be clearer patterns that would emerge in a larger group, but that would probably be true of any categorization of people, such as by social class or geographic location. That being said, we did find a few patterns that we thought were worthy of further investigation (see next question).

AK: One thing that struck me about your book was the diversity you found among the Black couples you interviewed. What were some differences you found among Black married couples?

KBM and CC-B: Sociologists have speculated that Black married couples are more egalitarian than couples of other ethnic backgrounds, particularly Whites, and because we were looking at Black couples from such diverse backgrounds, we were excited about investigating that idea more deeply. We did find that, regardless of their marital ideals, American-born Black couples were more likely than Whites or immigrant Blacks to share tasks and power fairly equally and that black husbands generally weren’t threatened by Black wives’ income earning power. Conservative religious values of headship and submission expressed by some American-born Black couples actually translated into more role sharing in daily life because the men were more involved with their families. No couple ever used the word “egalitarian,” but some couples professing to share everything “fifty/fifty,” still left the wife with most of the responsibility for housework and childcare even though she worked.

But the American-born Blacks were distinct from the Caribbean and African immigrants, who had radically different approaches to ideas of egalitarianism. African immigrants usually said they wanted to “adjust” or “adapt” to more egalitarian practices, which they saw as distinctly American and necessary to life in America. They generally weren’t fully egalitarian, but they were certainly not replicating the practices they had grown up with in their home countries, where they commonly compared their fathers to “dictators.” Caribbean immigrants, particularly men, were the opposite, wanting to maintain patriarchal power they would have had on the Islands. Caribbeans–and also whites—who were more conservative or traditional attached those values to economic power for men and felt strongly that men should be providers and that mothers shouldn’t work outside the home. For American-born Blacks, working wives and mothers were a norm regardless of the couples’ marital ideals.

Sometimes quantitative work can lead people to believe that an aggregate difference between two groups indicates that there is homogeneity within each group. When it comes to “Black marriage,” that perspective has often led people to view Black couples as deficient because marriage rates are lower than those among white couples, and poverty and divorce rates are higher.  But there are lots of Black couples who marry and work things out, and within the group of those who do, there are many approaches to being in a marriage.