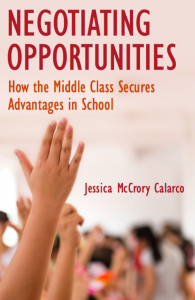 Jessica McCrory Calarco is an Assistant Professor of Sociology at Indiana University at Bloomington and recently published the book Negotiating Opportunities: How the Middle Class Secures Advantages in School (Oxford Press). Based on 5 years of ethnographic fieldwork following a group of students from 3rd to 7th grade, she explores class differences in the ways in which students interact with teachers. She found that, coached by their parents, middle class students are more likely to ask teachers for assistance, accommodation, and attention, while working class students acted with more restraint. I was recently able to interview about her book.

AK: What were some differences by social class that you found in students’ interactions with teachers?

JMC: The middle-class and working-class students were similar in many ways. They liked their teachers and they were excited about learning new things. Where they differed, though, was in the extent to which they tried to negotiate for individual (and often unfair) advantages in school.

At the schools where I observed, teachers got a steady stream of questions and requests. The vast majority of those questions and requests came from middle-class students. And many of those requests went beyond what was fair or required. Middle-class students asked for extensions on assignments. They asked teachers to check their work on tests. They monopolized class time with their stories. They even tried to talk their way out of punishment when they got in trouble for forgetting homework or running in the hallways or being disrespectful to their peers.

Middle-class students were also incredibly pushy in making those requests. They rarely sat patiently with their hands raised, especially if that meant waiting more than a few seconds for a response. Instead, they called out, got up from their seats, and even interrupted teachers to ask questions. They also kept asking, even when well-meaning teachers tried to deny those requests. They refused to take “no” for an answer, and they were willing to waste class time (and sometimes call in their parents for reinforcement) to get the support they desired.

Teachers rarely got questions or requests from working-class students. They didn’t feel entitled to teachers’ assistance, accommodations, or intention. And they tried hard to manage on their own. Of course, working-class students did sometimes ask for assistance or accommodations or attention. But the support they requested was typically fair or required. They asked for help when they were struggling to understand concepts. They raised their hands when teachers asked for volunteers to share.

Working-class students were also more patient and more polite in making requests. They would often spend three or five or even eight minutes with their hands raised, even while teachers responded to other students who got up or called out, instead. In the process, working-class students sometimes fell off-task or even gave up, leaving assignments incomplete and questions unanswered on tests. Furthermore, when teachers denied their requests, working-class students rarely pushed back. They just accepted the “no” and moved on.

AK: What role did parents play in teaching children to interact with teachers in specific ways?

JMC: Middle-class and working-class parents all cared deeply about their children, and both groups wanted their children to succeed. But they differed in the lessons they taught children about interacting with teachers and securing advantages in school.

AK: Did these differences lead to unequal outcomes for children, and what can be done to reduce these inequalities?

JMC:  Middle-class students’ negotiations with teachers gave them a number of unfair advantages in school. They persuaded teachers to help them correct their work on tests. To grant them extensions on assignments. To exempt them from punishment when they got in trouble. To give them extra time to share their thoughts and ideas. In sum, the bulk of teachers’ support went to the students who needed it the least.

That said, those advantages weren’t automatic. Middle-class students were only successful in negotiating advantages because teachers said “yes” to their requests.

Teachers worried because middle-class parents and children could make their lives miserable. They could waste class time with constant emails and back-and-forth negotiations. They could undermine teachers’ authority by complaining to the principal or “blacklisting” teachers they saw as “unresponsive.” They could jeopardize the school by withdrawing critical financial and political support.

Of course, those changes aren’t easy to make. Middle-class families have a history of hoarding opportunities, and they’re unlikely to give up their privilege without a fight.

In the short term, then, we also need to make schools and classrooms more welcoming places for working-class families. We need teachers to recognize silent signs of struggle. And we need teachers to reach out and offer support, even when students don’t ask for it themselves.

Jessica McCrory Calarco is an Assistant Professor of Sociology at Indiana University. She is the author of Negotiating Opportunities: How the Middle Class Secures Advantages in School. Follow her on Twitter  @JessicaCalarco. Arielle Kuperberg is an Associate Professor of Sociology at the University of North Carolina at Greensboro. Follow her on twitter at @ATKuperberg

Interesting article, although I'm curious as to now "middle class" and "working class" are defined here and how the observer knew which children were middle class and which were working class. Is social class always this black and white?