Estrangement and the Bridge between Parent and Child

These days—perhaps as in every generation—relationships between grown children and their parents have changed. Parents and 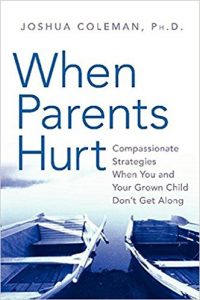 grown children expect to be friends. Many have that experience. But, remarkably, Joshua Coleman finds that perhaps thanks to this closeness there also are profound falling-outs. Coleman works with families where parents and adult children have been estranged and his book, When Parents Hurt, is a resource for those isolated parents who wonder “am I the only one?”

Coleman is a psychologist at San Francisco Bay and a past Co-Chair of the Council on Contemporary Families.

LG: How common is parental estrangement? Do you see trends? So, for instance, is it more common? Or are there patterns–like does it happen in some groups more than others to the best of your understanding?

JC: A recent meta-analysis on the topic by Lucy Blake notes that while the research on estrangement has grown significantly in the past five years, it is still new and sparse. Therefore, getting a clear assessment of whether estrangement has become more common is challenging.

Based on my clinical experience though, I believe that it is widespread and growing for the following reasons:

LG: What are some of the biggest hurdles that estranged parents have to get over to live with–or change–the situation?

JC: There are several common obstacles to resolving conflict with an estranged adult child:

In general, most reconciliations require the parent to take the initiative. However, there are many reasons why an adult child might not be willing, despite the parent’s efforts:

The following are some common obstacles to reconciliation on the part of the parent:

LG: Is there such a thing as “recovery” from estrangement? I think it might take your whole book to describe, but can you tell us a little bit about what recovery might look like?

JC: In general, reconciliations are the most likely when parents can do the following:

On the part of the adult child, reconciliation is more likely if they can: