Where the Millennials Will Take Us: A New Generation Wrestles with the Gender Structure 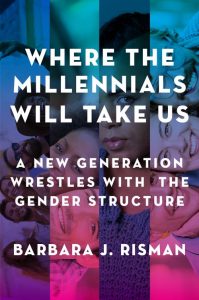 What’s happening with kids today?  A few years ago, liberals were confidently–  and conservatives dejectedly– predicting that millennials were blurring traditional distinctions between the sexes both in the workplace and at home, operating on “the distinctive and historically unprecedented belief that there are no inherently male or female roles in society. While 55% of the youth vote went to Hillary, that is five percent  less than voted for Obama.  More important, over a third of Millennials voted for Donald Trump despite his having bragged about harassing women on tape.   The #MeToo movement’s amazing popularity, with the women involved chosen as 2017 Person of the Year at Time Magazine,  suggests that feminism has risen again.  Is this feminism a youth movement or still led by Millennials’ mothers? Are young people on board with today’s feminism?

Some sociologists are arguing that today’s young people may be getting more conservative when it comes to gender equality.  They  noticed that between 1994 and 2014 high school seniors had become more traditional in their ideas about how to organize family life and decision making in the home (Pepin and Cotter 2017). Another report  published by the Council for Contemporary Families (Fate Dixon 2017), showed that similar slippage  between 1994 and 2014 but only for young men. This led to a New York Times headline asking worriedly whether millennial men now wanted stay-at-home wives, and a WA Post oped assuring conservatives  that the rediscovery of “gender specialization” is a natural development that reflects the way most families actually work, replacing the egalitarian feminist vision of sharing caregiving and breadwinning responsibilities equally.

So what are the Millennials’ gender politics?  My colleagues and I examined the results of a nationally representative sample, the General Social Survey, which asks the same questions every year, allowing us to track tends over time analyzing data from 1977 to 2016. What stood out to us was the virtual collapse of support for the traditional notion that women are suited only for motherhood and homemaking and should be “protected” – or excluded — from the public sphere. Our analysis suggests that the major change in our society is that those who used to believe women belonged in the home and did not deserve equality at work no longer believe that (or at least they no longer admit to doing so on surveys).  But those people still do believe that mothers should be primarily responsible for children.

The most important division today is not between feminists who champion women’s right to do everything in the public sphere that men do and traditionalists who endorse men’s dominance in the world of work and politics, something supported by most Americans for more than 150 years. Today’s debate is between the minority of people who believe mothers are primarily responsible for children and those who wholeheartedly support the sharing of duties in both private as well as public life. Even the most conservative Republicans accepted Sarah Palin’s right to be a vice-presidential candidate, although they did not necessarily accept the feminist premise that marriage itself should be egalitarian and husbands should be equally responsible for the housework and child care.

Where the Millennials stand on these questions is still being debated.  In my forthcoming book (January 2018, Oxford University Press,)  Where the Millennials Will Take Us: A  New Generations Wrestles with the Gender Structure I argue that the Millennials are a generation with as divided gender politics as the rest of the country. In interviews with 116 Millennials, I found that gender stereotypes, and discrimination still shape their experiences. The fear of being stigmatized for  challenging gender stereotypes is still widespread, but far more among young men than women.  Nearly everyone felt the powerful constraint of gender stereotypes when it came to how display their bodies, from the clothes they wore to the mannerisms they used, to what they weighed and where they had muscle.

Beyond that similarity, there was great diversity in how Millennials wrestled with the gender structure. But that diversity wasn’t really based on the sex of whom I was talking too. Some were very traditional, both women and men, especially those who subscribed to literalist faith traditions. They supported different norms, opportunities and constraints for men and women as family members. Others were innovators, feminists in belief. They talked the talk, and walked the walk or claimed to.What makes these innovators different from 2nd wave feminists is that this does not seem to be a women’s movement, but rather a feminist one that includes men. Perhaps even more distinct, an emergent trend in this generation is a small but vocal group of young adults who reject gender entirely, refusing to “do gender” in how they present their bodies.  Some adopt a genderqueer identity, between the binary of man and woman, and dress accordingly. I interviewed several female-bodied, genderqueer Millennials who felt their female body dressed in male clothes became androgynous. Others mixed feminine and masculine styles, such as male bodied person donning high heels with his beard, or a female bodied person wearing combat boots and short cropped hair,   long earrings and a feminine lacy scarf. There is no accurate count of how many such rebels exist nationally, but a new study from the Williams Institute, a think tank within the UCLA school of law, found that a quarter of California youth were gender non-conforming.

The majority of the young people I interviewed, however, were somewhat unsure about what gender means for them today.  Their answers were full of inconsistencies, as full of chaos as the world they are trying to navigate. Girls today are told they can be anything they want to be, but still feel pressure to be thin, accessorized and attractive to men. Perhaps this paradox between freedom of career choice and continued expectation to be eye candy  helps to explain the continued sexual harassment they face.  Gender equality has meant opportunity, including the opportunity to remain an object for male gaze. Boys continue to be stigmatized for doing anything that even hints at femininity, from playing with dolls, to studying to be a nurse. And yet, those same boys are expected to be involved fathers and nurturing fathers. The result is much confusion of just who expects what, and why.

Millennials are as divided in their beliefs about gender as is the rest of America.   But while some Millennials may be ambivalent about how far to push the gender revolution, this is not your grandparents’ ambivalence. My data suggest one more commonality among this generation.  Whatever they want for their own lives, they are not interested in forcing other people into gendered boxes, or condemning them for choices that violate traditional beliefs about what males and females should do. They seem to have an unprecedented acceptance of the choices other people make to either meet or reject the constraints of gender expectations. What was very clear is that even Millennials who make traditional choices are unlikely to accept a political agenda that penalizes people who do not.

Barbara J. Risman is a College of Liberal Arts & Sciences Distinguished Professor of Sociology at the University of Illinois at Chicago and a senior scholar at the Council on Contemporary Families.   She is currently a  2018 Fellow at the Institute of Advanced Studies at Durham University in the UK.

I'm a "Millennial" and after reading this article I also see the trend of people who have traditional beliefs having acceptance of the choices of others who meet or reject gender expectations. I will say it's confusing and uncomfortable for me with all of these gender identities, but I think that's because it's a significant change to society. I agree with biology that you're either a male or female. Perception is everything and I think when a male figured person with a beard is wearing heels and a dress it's difficult for my brain to process. I know this sounds like a redundant, stereotypical conservative response but for my entire life everything has been male or female. From birth to the clothes, sports and television shows I've seen over the years there has only been traditional roles otherwise you were poked fun of or shamed from society for being different. I'm not sure why we (Millennials) are less likely to negatively respond to non-traditional beliefs but I think it's also because the majority of us really don't want to stir up trouble or make others' lives terrible. The common phrase "treat people the way you want to be treated" or "golden rule" really works. I don't care who you want or what you want to identify as but don't go out of your way to impose your beliefs on me. I will respect anyone regardless of their gender identity and will not penalize them for that. Unfortunately, the "old" politicians who are set in their ways will probably disagree with me and reach out to preventing non-traditional beliefs. Everyone has something to offer in this life and for those who are "non-traditional" are not exempt from that. They have just as much and maybe more to offer than us traditional folks. I'm eager to learn more and help myself understand non-traditional beliefs so that I can work and live a healthy life with the others who surround me every day. Sheltering yourself and not trying to understand "the other side" will only make life miserable for yourself. I will try my best to put my own beliefs and personal opinions from trying to stop me from accepting change. Gender is not black and white anymore and cannot be written down in laws stating what can and can't be done. The fact of the matter is that non-traditional beliefs are here and we need to start understanding them so we can all work together.