Revisit: Millennials Changing Binaries (in more ways than one, of course) 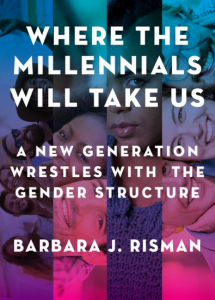 The term “millennial,” according to Frank Furstenberg, is an overly simplistic blanket term frequently used to describe the generation born anywhere between 1980 and 2004. This leads to confusion when we see debates in the media about where millennials fall on either side of the conservative or liberal binary, even when research shows significant complexity in millennial attitudes and behaviors. This month, I asked Barbara Risman, Professor of Sociology at University of Illinois at Chicago and President of the Board for the Council on Contemporary Families, about new research for her forthcoming book Where Will the Millennials Take Us: Transforming the Gender Structure? The research is in Social Currents. Risman’s findings suggest that as gender itself challenges binaries, so do millennials’ negotiations with the gender structure. Rather than a clear-cut conclusion about “millennial” approaches to gender, Risman finds four unique typologies that situate millennials within the gender structure: the true believers, innovators, rebels, and straddlers.

Q: In your typology, I was intrigued by the gender rebels: This is the millennial group that seems most different from previous generations. They emerged in your investigation when you demarcated material and cultural dimensions of the gender structure. Can you tell us more about how you came to recognize the gender rebels?

BR: I agree with your assessment that these gender rebels are perhaps the one group in my research that appear to be an invention of the millennial generation. Gender rebels are very much like a group I call the innovators; both could be described as trying to walk the walk of feminism, even if feminism is so in the air they breathe, they sometimes do not use the word. At the individual level of analysis, both groups reject being constrained to stereotypically feminine or masculine personality traits, both reject the cultural expectations that men and women should live different kinds of lives, and both are ideologically opposed to gender inequality. They are very similar in their cultural rejection of gender at the individual, interactional and macro ideological levels.

But when it came to the material aspects of gender, not ideas, but bodies and the class between their bodily presentations and the organization of social life, rebels and innovators couldn’t have been more different. The rebels rejected the notion that just because they were born female (or in one case, male) that meant they should present their bodies as feminine (or in one case, masculine). These rebels rejected the material expression of gender with their bodies. At the individual level they were androgynous, or if female, they presented their bodies in ways traditionally associated with masculinity. This had repercussions for how people treated them, with gender policing especially dramatic for men who challenged gender norms, but also for women who challenged how they presented their bodies once they reached puberty. At the macro level of organizational design, anyone who falls between the binary of male and female faces constant oppression as they do not fit within standard social categories. As you suggest, my distinction between cultural and material dimensions of the gender structure helps us to understand why the experiences of rebels are so different from those of innovators.

Q: What do you see as the practical/policy implications of your findings about the complexity of millennial gender typologies for the advancement of gender equality?

BR: There was one response that didn’t differ across groups. It didn’t matter if someone was a true believer in essential gender differences or a rebel, everyone, male or female, or somewhere in between, expected to work throughout their lives. That has great policy implications. We need to change our workplace policies to reflect the reality that all people in this generation expect to work in the paid labor force, and thus, workplaces have to be re-designed to be more family friendly. In this and no doubt future generations, employed adults will also be caretakers of young children, sick relatives and aging parents. We must use social policy to re-design the world of paid work to make this possible. Every society needs both economic activity and caretaking, and if the same people do both, social organizations have to reflect that reality.

A second policy implication reflects the needs of the rebels. Now that we have people who refuse the label of man or woman, and gender categories themselves are under siege by at least a small group of millennials, we have to begin to allow for gender variation in our social world. If there are people who are neither women nor men, then we need bathrooms that anyone can use. One policy implication is to move beyond single-sex bathrooms. Why not continue to require all stalls to have doors, and perhaps add curtains for urinals, and allow everyone to use every bathroom, and wash their hands next to people who are their same sex and those who are not? Why gender products? Why do we need different colored razors for men and women? At the end of my book, I call for a fourth wave of feminism that seeks to eradicate not just sexism but the gender structure itself. Only then will people who are constrained by gender, all of us, will be free.

Q: Your qualitative research makes a strong argument for the heterogeneity of millennials’ relations to the gender structure. That heterogeneity is very important to understanding things as they are, but sometimes in media the message gets lost. What advice do you have for researchers communicating nuanced findings to public audiences, when many in popular media depict millennials as falling on one side of a progressive/not progressive dichotomy?

BR: This is a problem for both qualitative and quantitative researchers. For qualitative research, I suggest creating catchy names for groups that differ, and insisting that the range of responses be covered. For quantitative researchers, I think a suggestion often given by Stephanie Coontz is right on target, and that is to discuss both means and standard deviations, especially when there is great variation around the average, and so people are really having different experiences.

Braxton Jones earned his MA in Sociology at the University of New Hampshire; he is currently in the doctoral program in sociology at Boston University and serves as a CCF Graduate Research and Public Affairs Scholar.