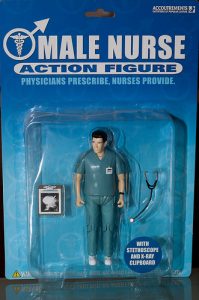 In light of Beyond the Stereotype: The Nurse is a Man letter to the editor and related NYT article recently, we’re revisiting this report on Gender & Society research from Girlw/Pen.

Recent headlines such as “Men, Who Needs Them?” and “Why Fathers Really Matter” showcase a growing debate about the importance of including men in discussions of gender inequality. Two new studies from Gender & Society turn attention to areas in which men have long been ignored: at home, in the study of conception, pregnancy and childbirth, and at work, in the caregiving professions—particularly nursing. New research demonstrates under what conditions men’s contributions are slowly becoming more visible and what the benefits are (and can be).

In the Gender & Society study, “More and Less than Equal: How Men Factor in the Reproductive Equation,” Yale and Princeton University researchers uncovered widely varying views of men’s contributions to reproduction. Clinicians and scientists perceive men as incredibly important when it comes to conception; equally important to women when it comes to genetics; and incredibly unimportant when it comes to pregnancy.  Even now in the 2nd decade of the 21st century, basic information about how men’s own health status matters for reproductive outcomes, such as birth defects, is lacking.

About the study. Sociologists Rene Almeling (Yale) and Miranda Waggoner (Princeton) brought together their respective studies of professionals involved with sperm banks and the Centers for Disease Control and Prevention’s (CDC’s) Preconception Health and Health Care Initiative (PHHCI). The sample includes data from Waggoner’s interviews with 57 experts involved with the CDC’s Initiative and from Almeling’s interviews with 18 people involved with sperm banks, including founders of sperm donation programs, clinicians, researchers, and staffers from four sperm banks. The investigators recognized that sperm banks are a unique site for pre-conception practices, complementing the PHHCI.

Men left out. The standard of care in preconception health is to ask “every woman, every visit” about her health and fertility intentions, but preconception researchers interviewed for this study believed it was not “feasible” to ask such questions of men. Despite giving lip service to the idea that “men are equally important” in reproduction, Almeling and Waggoner’s interviewees admitted that men’s contributions are “sometimes left out of the discussion.”

In a comprehensive analysis of research on preconception care, the study reported that a majority of journal articles did not discuss men at all or mentioned them only briefly. A striking example was in the introduction to an issue of the American Journal of Obstetrics & Gynecology (AJOG) on preconception health. In it, the AJOG authorsdiscussed 84 different risk factors and components of preconception care. Rather than including men in categories such as alcohol or illicit drug use, they were segregated. This means that everything pertaining to men was addressed in a single catch-all category at the end labeled “men,” report Almeling and Waggoner.

Why does it matter? Almeling and Waggoner explain that medical knowledge about reproduction matters, not only for men and their children, but also for how we as a society think about reproductive responsibility. An important step is making sure that men’s contributions to reproduction—not only to conception but to successful, healthy pregnancies–are observed, tested, investigated and discussed.

Calling on the Affordable Care Act. The authors note that paying attention to how reproductive equations influence policy can suggest new and different avenues for improving public health.  Specifically, they point to the Affordable Care Act, which stipulates that women with private insurance are no longer required to pay a co-payment for a preconception health appointment.  “Excluding men from such coverage continues to obscure their role in reproduction,” argue Almeling and Waggoner.

One way of improving public health and men’s involvement in healthy families would be to recruit more men into nursing, so that men’s experiences, concerns, and values are more visible among the front line providers of family care. Yet only seven percent of the nurses in the United States are men, as discussed in a new study, just released online at Gender & Society.

In her Gender & Society article, “Recruiting Men, Constructing Manhood: How Health Care Organizations Mobilize Masculinities as Nursing Recruitment Strategy,”  Marci Cottingham, a postdoctoral fellow at the University of North Carolina-Chapel Hill’s Department of Social Medicine, discusses ways that health care organizations attempt to overcome the disconnect between “caring” – defined as the feminine sphere of nurses — and “curing” – defined as the masculine sphere of doctors.

Cottingham’s unique study examined the recruitment messages of healthcare organizations, including the American Assembly for Men in Nursing (AAMN). She conducted a systematic, in-depth analysis of 32 videos, brochures, and posters, as well as 286 pages of text from campaign reports, nursing webpages, and newsletters. A total of 124 men were featured in these materials. These materials included a YouTube channel dedicated to recruiting men into nursing. (Check it out to see individual men nurses discussing their perspectives on joining the profession.)

Cottingham finds that many campaigns attempt to redefine nursing in traditionally manly terms – such as an occupation that involves risk-taking, courage, and adventure. This YouTube video, promoting travel nursing, opens with men nurses engaging in extreme snowboarding and driving all-terrain vehicles as part of what travel nursing can look like.

A minority of recruitment efforts, by contrast, center on redefining manhood to encompass caring—this video highlights men’s stories of helping vulnerable people. “Encouraging men to engage in more caregiving—at work and at home—may decrease the burden of carework that typically falls on women and may increase equality between men and women,” reflects sociologist Cottingham.