Yo, is this Ashton? An interview with the author of This Chair Rocks: A Manifesto Against Ageism 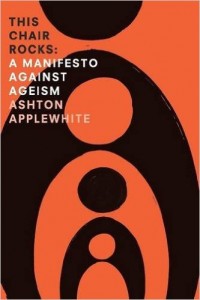 Ashton Applewhite is a Council on Contemporary Families expert and has been recognized by the New York Times, National Public Radio, and the American Society on Aging as an expert on ageism. Her new book, “This Chair Rocks: A Manifesto Against Ageism,” was just published in April 2016. She blogs at “This Chair Rocks,” where you can follow her ongoing insights, speaks widely, and is the voice of “Yo, is this ageist?” Ashton’s work is a call to wake up to the ageism in and around us, embrace a more accurate and positive view of growing older, and push back. She agreed to answer a few questions for us:

Q: First, a challenge: what’s one single thing you “know” with certainty, after years of research into modern families?

AA: One of the biggest obstacles to the well-being of modern families is the all-American myth of self-reliance—that people can and should “go it alone”—and we don’t call it out enough. That myth, which equates needing help with physical frailty and weakness of character, serves none of us well—least of all caregivers, people with disabilities, and older people (increasingly overlapping circles on the Venn diagram of life).

The myth exacts an immense personal cost: it downplays life’s challenges, it needlessly exhausts, and it shames us when, inevitably, we fall short. The social cost is high too: a culture that idealizes self-reliance serves the anti-welfare agenda of proponents of small government, because it silences and deflects questions about the structures that strand us. This go-it-alone ethic is one reason that care for the very young and very old is not publicly funded, which typically leaves family members holding the bag. Another reason is ageism, the last socially sanctioned prejudice, which disproportionately affects people at either end of the age spectrum.

Q: Give us the “Twitter” version of your current research — in 140 characters (give or take), what are you working on now?

AA: I’ll give you two tweets worth: I’m an author, speaker, blogger, and activist working to make discrimination on the basis of age as unacceptable as any other kind of prejudice. It’s time for a radical age movement, and I hope my new book, This Chair Rocks: A Manifesto Against Ageism, will help catalyze it.

Q: How would you encourage a scholar of family life to work to get their research into public life, affecting policy and challenging assumptions about “average families”?

AA: Consider self-publishing. Jane Friedman’s site is a good starting point. I’ve been published by four of the big five publishers but elected to bring this book to market myself, partly because of their general cluelessness about the new digital landscape and partly because of my subject matter. Self-publishing means more control, more work, and more reliance on the network of friends and colleagues that social media enables. Like many of your publications, my book is a call for progressive social change—in this case to mobilize against ageism as we have against racism, sexism, and homophobia. Hence my slogan: Self-publish together! It’s different, and a lot more congenial, to ask for help from readers who share a goal that benefits many. People respond to a persuasive case that an issue requires collective action. I’m getting real traction, and I think many of my CCF colleagues would too. Self-publish together to change the world!