I decided to take a methods course in the Women’s Studies department this spring. The first assignment was to identify a word central to our research interests and to trace the etymology of our choice. As a sociologist primarily interested in families and inequality, I decided on the word marriage, thinking it might offer insight into the transformation of American families today.

Although marriage has been a universal social institution throughout recorded history, with one exception (the Na people of China), there is no consensus on a definition of marriage.[i] When researching the word’s origins, I started where I always do, with historian and family scholar Stephanie Coontz. In her book “Marriage, a History: From Obedience to Intimacy, or How Love Conquered Marriage,” Coontz details in Chapter 2 the historical challenges of defining precisely what marriage means. Across societies and time, marriage has included (but has not been limited to) the union of: two families; one man and one woman; one woman and one ghost; one man and many women; two people who have a child together; and one woman and all brothers in a family. More recently, regulations of personal unions have centered around age, race, and sex (e.g., in the U.S., minimum age limits, Loving v. Virginia, Obergefell v. Hodges).

While marriage regulates social rights and obligations, nearly every function of marriage has been achieved by a mechanism other than marriage in one society or another. According to Coontz, stories that marriage was invented either for the protection of women or to keep women oppressed are probably not true. More likely, Coontz argues, marriage was an informal social mechanism to organize the daily tasks of life, sexual relationships, and child rearing. As greater economic disparity grew, marriage transitioned from functioning as a vehicle for creating community connections into a means to consolidate resources and transmit property. The meaning of marriage shifted dramatically in the twentieth century, moving from an institutional marriage to a companionate marriage.[ii] Essentially, spouses were assumed to be each other’s friend, a role not central to earlier definitions of marriage.[iii] The second transition was from companionate marriages to individualized marriages. In this conceptualization, the emphasis is on personal development whereby marriage leads to fulfillment and growth for both partners. 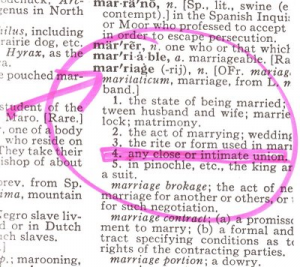 It is challenging to untangle contemporary definitions of marriage from definitions of wife and husband. Wife is a noun, defined in relation to another. According to Merriam-Webster dictionary, wife means “the woman someone is married to.” Wives often take on adjectives such as military wife, political wife, housewife, and so on.[iv] Author Anne Kingston reports the first appearance of the word wife in the Bible is in Genesis 2:18: “And the Lord God said, it is not good that the man should be alone; I will make him an help meet for him.” As a concept, wife understood, quite literally, as a helpmate. Husband, on the other hand, is either a noun or a verb, meaning “a male partner in a marriage,” “to save,” “a frugal manager,” or “to till the ground, to cultivate.”

Last year, the definition of marriage was central to the U.S. Supreme Court case Obergefell v. Hodges, which ultimately granted same-sex couples the right to marry in the U.S. While a somewhat oversimplified interpretation, the case hinged on the Justices’ acceptance that the definition of marriage evolves over time.[v] Justice Kennedy wrote, on behalf of the majority: “The history of marriage is one of both continuity and change. Changes, such as the decline of arranged marriages and the abandonment of the law of coverture, have worked deep transformations in the structure of marriage, affecting aspects of marriage once viewed as essential. These new insights have strengthened, not weakened, the institution. Changed understandings of marriage are characteristic of a Nation where new dimensions of freedom become apparent to new generations.” Kennedy added, “This view of marriage as timeless and unchanging was contradicted by an abundance of scholarly work.”[vi]

For further fun, I decided to see what Google images appear with the search term “marriage definition.” Some of my favorites, because they are insightful, funny, appalling, or thought-provoking, are posted below. Full disclosure, I skipped the hate-filled images. 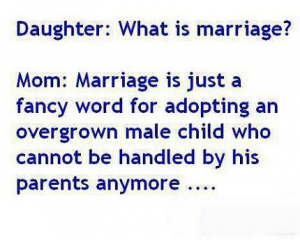 Joanna R. Pepin is a PhD candidate in the Department of Sociology at the University of Maryland. She primarily researches romantic relationships and inequality, such as power between partners and the association between romantic partnerships and social stratification.

[iv] Kingston, Anne. 2004. The Meaning of Wife: A Provocative Look at Women and Marriage in the Twenty-First Century. New York: Picador.