Going Dutch: A Visualization Trip Through the Wayback Machine to the Google IPO

José’s last post made me think of visualizing processes.  Of late, I’ve been thinking about how Jim Cramer had his head handed to him by Jon Stewart on the Daily Show (link to 3/12 Cramer episode).  Stewart mentioned how markets are two-tiered, one for the insiders and one for the rest of us.  The warnings were out there that the system is broken.  One Frontline from a few years ago, Dot Con (2002),  talks about how during the dot com boom, initial public offerings (IPOs) of stock were rigged by the powers that be.  Another, The Wall Street Fix (2003), discusses the circumstances that led to the World Com bubble that led to a meltdown and eventually a $1.4B settlement between regulators and 10 Wall Street firms.

Sociologists often view markets as social constructions.  I tend to view markets as like sausage.  You really don’t want to know too much about the details of production.  An example of this is Google IPO in 2004, a novel approach which became riddled with turf wars involving the status quo.  Google sought to price its initial offering of stock in a more fair and equitable manner, eschewing the “insider” bias typical of IPOs.  A 2005 American Sociology Association presentation by Martin Barron noted Google’s intentions:

“Google’s IPO eschewed the traditional method for pricing and allocating shares for an unconventional auction format. This was an attempt to minimize the underpricing of its shares and allow a broader class of investor access to IPO shares. By pursuing this more equitable approach, however, Google threatened the enormous profits that IPOs had previously generated for entrenched Wall Street interests.” —The Google IPO

This NYTimes graphic tries to explain what Google intentions with a modified version of what is called a Dutch auction.

Personally, all you viz kids out there, I think the above is a horrible graphic.  I reworked it, as I do for when I teach data visualizations and highlight my (ahem) mad Photoshop skillz: 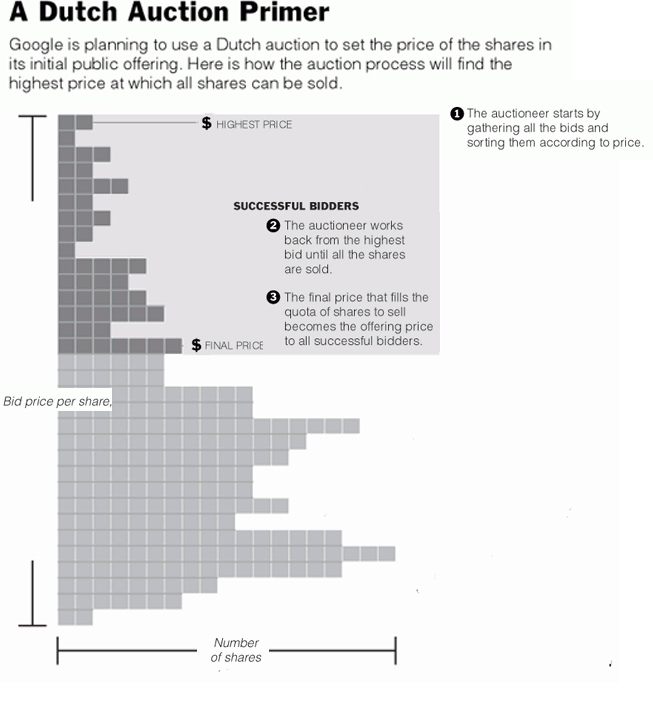 I like the idea of markets actually moving towards satisfying the underlying assumptions that economists make.  I feel the Dutch auction moves towards that by reducing the transaction costs that often go to the investment banks and increases fairness by not allowing insiders to buy at a deflated price, only to flip (dump) the stock just after it’s offered and reap huge profits.

Of course, there are consequences for countering Wall Street, as Barron notes:

“… far from passively accepting this challenge to the status quo, these interests actively worked to ensure that Google’s IPO—and hence the auction format—would be seen as a failure.”  —The Google IPO

Lo and behold, look at how the business press framed the IPO, despite it being a “success” in Slate:  “Four Ways Google Failed: How the IPO didn’t change Wall Street.”  So, we arrive full circle to Jon Stewart who quipped that maybe the business press should be more than cheerleaders for the status quo.  Perhaps business schools should consider this, as well.