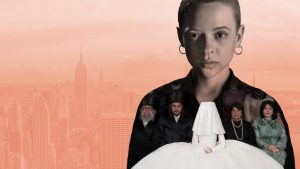 Like many who left ultra-Orthodox communities in which they were raised, I eagerly awaited the release of the Netflix miniseries Unorthodox, loosely based on Deborah Feldman’s first memoir by the same title that chronicles her journey out of her Hasidic community in Williamsburg, Brooklyn, and her efforts to join the broader secular society.  I was curious to see in what ways the narrative of the miniseries would reflect the experiences of the 74 ex-Hasidic men and women I interviewed for my PhD dissertation and forthcoming book, Degrees of Separation: Identity Formation While Leaving Ultra-Orthodox Judaism (Temple University Press, April 2020).  Hasidic communities adhere strictly to Orthodox Jewish law, members tend to marry young and have large families, and generally shun non-Jewish culture and outsiders.

The miniseries revolves around the attempt of Esty Shapiro—brilliantly portrayed by Shira Haas—to leave her socially and culturally isolated Williamsburg community and start a new life in Berlin, Germany.  The miniseries is deeply compelling and captures many truths about the lives of the people I interviewed as well as many others who make the complex journey out of ultra-Orthodoxy.

The miniseries highlights Esty’s traumatic experiences inside her Hasidic marriage.  Although Esty rejects the term “escaped” to describe her journey and protests that her community was not “a prison,” she did suffer a lot.  As Esty reflects at one point about her life in Brooklyn to her new friends in Berlin, “God expected too much from me.”  She is perplexed when informed just before her wedding of the basic mechanics of sex and the complex details of the “family purity” laws that require her to chart when she is menstruating and to abstain from sex during those times and for a week afterwards.  Esty cries through the sheering off of all her lush hair the morning after her wedding and is terrified and alienated when she visits the ritual bath (mikvah) and immerses herself in order to make herself “pure” and available to have sex with her husband.  She also suffers extreme physical pain when having sex with her husband and after months of trying, they are only able to engage fully in intercourse a single time.  The physical pain is only heightened and given an added sting by her nosy and insensitive mother-in-law’s intrusions into her sex life aimed at securing her another grandchild.  Ultimately, her mother-in-law encourages her son to divorce Esty because it is believed she will never be able to get pregnant.  Esty’s internal struggle mirrors what many of my interviewees grapple with once they leave their community but still hold onto numerous religious practices and beliefs from their old community.

I will focus on three themes of the exit process from religion that are significant in my own research and are all dramatized in Unorthodox: the dire warnings from community members to potential exiters; the maintenance of religious beliefs and practices by exiters even after they exit; and the hybrid technique of integrating aspects of an exiters’ past into their present and future.

While still in Williamsburg, Esty secretly took piano lessons for several years from a non-Jewish woman who rented an apartment from her grandfather.  Before Esty leaves Brooklyn, the music teacher gives her student a small compass to help her find her way once she exits her community. Indeed, it is an extremely difficult task for exiters to create a new life for themselves once all the rules, norms, expectations that they grew up with are discarded.  These communities tell those contemplating or suspected of contemplating leaving that it is impossible to do so, that all who leave are crazy and end up with ruined and dysfunctional lives. It is clearly a lie, but for those inside the community lacking information about the outside world and those who make it out, this can be a very compelling argument to stay.

One of the most powerful scenes occurs shortly after Esty clandestinely travels from Brooklyn to Berlin and finds herself on a beach, surrounded by scantily clad carefree swimmers splashing around and enjoying their time in the sun.  Esty is still wearing her Hasidic garb, including her conservative long skirt, thick opaque brown tights, and wig (sheitel).  We feel Esty’s internal struggle, her desire to be “normal” and join in the fun, while being simultaneously horrified that people could expose so much of their bodies to total strangers.  She has internalized the teachings of her community that stipulate that the body, especially a woman’s body, must always be covered up in order to protect its sanctity and the purity of those around her.  Esty wavers for a moment, but then gathers her courage. She takes off her opaque tights and walks into the lake fully clothed. As she enters the shallow waters, she pulls off her wig and releases it. It floats away.  This emersion is a sort of reverse mikvah, a ritual cleansing of her former life and a symbolic rebirth into her new secular identity.

Esty’s internal struggle mirrors what many of my interviewees grapple with once they leave their community but still hold onto numerous religious practices and beliefs from their old community, such as an aversion to eating pork—which is strictly forbidden by Jewish law—and the persistence of belief in God, and conservative views of gender and race.  These practices and beliefs can prove difficult, if not impossible, to jettison.

The main weakness of the miniseries is its inclusion of a spy-like theme that distracts from its beauty and authenticity.  This theme begins in the opening scene of the miniseries with Esty surreptitiously collecting hidden items from around her bedroom—a wad of cash from inside a foam wig holder—in preparation of her departure.  The covert ops continue with a scene where Esty is taken by an aunt to a kosher supermarket so that her prospective mother-in-law can furtively inspect her, like a piece of meat at a butcher shop, to see if she passes muster.  This entire scene makes no sense. The mother-in-law doesn’t know her from around the small and close-knit neighborhood?  She can’t ask a friend?  The espionage intensifies when the Rebbe, the spiritual leader of the Hasidic community, orders Esty’s sheepish husband Yanky, accompanied by his cousin Moshe, a thuggish character and former renegade himself, to travel to Berlin to track down and bring back Esty.  Moshe even receives the obligatory box with a pistol when he checks into his Berlin hotel. Who does he get the gun from and what exactly is he supposed to do with it once he meets up with Esty?

This espionage subplot seems truly absurd. It makes Hasidic Jews and those who leave their community seem entirely foreign to the viewers who are finally coming to know this “exotic” community through shows like this one and to see them for the normal human beings they are, albeit living a wildly different lifestyle.

Ironically, the actress who plays Esty, Shira Haas, starred in the international hit show on Netflix Shtisel, which was a huge success because it made the ultra-Orthodox appear normal, or more accurately, as troubled and complex as everyone else.  They have distinct religious dress, beliefs, and rituals, but they too have romantic problems, marital disharmony, financial woes, struggles to find a career, and disappointments from their children.

Notwithstanding the distraction from the spy element, Unorthodox is a powerful series that celebrates the human capacity for personal transformation. It affirms that birth is not destiny, and gives voice to a group of survivors that are often marginalized in mainstream culture.

Newfield demonstrates how exiting ultra-Orthodox Judaism is not a single act of defiance, but an interactive process that extends for years after leaving and he highlights what these particular exiters lose and retain in the exit process.

Fader analyzes the complex and sometimes tragic existence of a group of ultra-Orthodox men and women who lead “double lives,” outwardly appearing to conform to the religious standards of their communities, while secretly online and in person violating those standards.

Davidman introduces into the study of religious exiting the importance of the body as a locus of transition and argues that bodily inscribed habits are the most difficult to relinquish, recurring unexpectedly in the lives of exiters even years after exiting.

Topel explores the lives of religious exiters in Israel and highlights the role that non-governmental agencies play in assisting them in their journey out of Orthodoxy.

Schneur Zalman Newfield is an Assistant Professor of Sociology in the Department of Social Sciences, Human Services, and Criminal Justice at the Borough of Manhattan Community College, City University of New York. Visit him online at zalmannewfield.com.

Schneur Zalman Newfield is an Assistant Professor of Sociology in the Department of Social Sciences, Human Services, and Criminal Justice at the Borough of Manhattan Community College, City University of New York. Visit him online at zalmannewfield.com.