The Return of Rehabilitation? Educational Programs for Prisoners Remain Inadequate 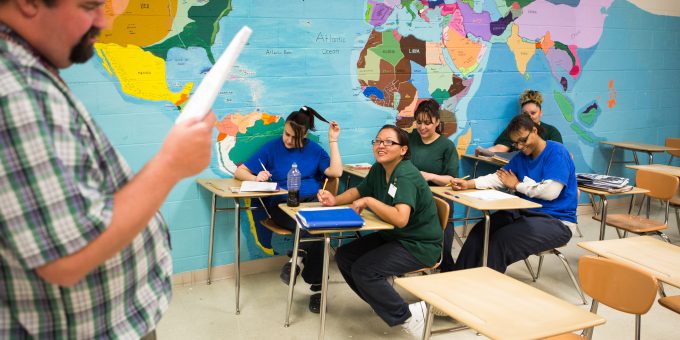 Up until the 2016 presidential election, criminologists saw increasingly hopeful signs that a new “smart on crime” political alignment was emergent: imprisonment rates (and crime) were declining, tough-on-crime policies were becoming increasingly unpopular among both Democrats and Republicans, and “rehabilitation” was reentering the criminal justice lexicon. In this context, in-prison programming – once considered a staple of liberal “coddling of offenders” – could potentially make a come-back. Yet at the same time, corrections departments’ budgets have been cut, leading some prisons to embrace austerity measures.

The last data point available on rates of prisoner participation in these types of programs is from the Bureau of Justice Statistics’ 2004 Survey of Inmates in State and Federal Correctional Facilities (SISFCF).i As I argued on Sociological Images, these data show that prisoners face severe educational deficits: over 60 percent of state inmates in 2004 reported that they had not made it past 11th grade in school. In addition, prisons were increasingly failing at meeting this need, with rates of participation in academic programs cut by almost half between 1991 and 2004. At the same time, however, participation in soft-skills “re-entry” programs was growing.

The new PIAAC prisoner data allows us to track how these trends have shifted in the past decade. While the two surveys are not identical, they do have several overlapping measures. Both draw from a stratified random sample of state and federal prisoners that allows us to estimate national prevalence rates. In addition, the PIAAC’s extensive educational data provide rich information on prisoners’ educational pathways that are unavailable in the SISFCF.

As shown in Figure 1, the PIAAC data show that just under half of prisoners (41 percent) reported that they had not enrolled in or completed an educational program during their current period of incarceration.ii However, fully 21 percent reported having received their high school diploma or GED since admission. Another 14 percent have participated in high school or GED programs without completing the degree and 11 percent participated in remedial education programs. Among the inmates reporting participation in high school or GED classes, 35 percent had earned a diploma or GED by the time of the survey. And while 7 percent had completed a college certificate or trade school program (with another 4 percent attending college or trade school programs without completing a certificate or degree), less than 2 percent had completed an Associate degree. A vanishingly small percent (less than 1) had completed a Bachelors or advanced degree.

These figures can be (roughly) compared to the 31 percent of state and federal prisoners in the 2004 SISFCF that reported participation in an academic program (which includes remedial, high school, GED, ESL, and college classes, but excludes any kind of trade school vocational training) since admission. Among the 19 percent of inmates that reported participation in high school or GED classes, 36 percent reported earning their GED since admission. Although differences in the measurement of these questions suggests caution in direct comparisons, the results suggest that academic program participation has increased.  In 2014, 63% of surveyed prisoners reported that they would like to be enrolled in an academic class or program of study.

As shown in Figure 2, rates of participation in various kinds of life-skills, job readiness, re-entry, and vocational training programs slightly increased over this period as well, growing from 43 percent of surveyed inmates in 2004 to 49 percent in 2014.iii In addition, rates in parenting or child-rearing classes doubled from 8 percent in 2004 to 16 percent of inmates participating since admission.iv 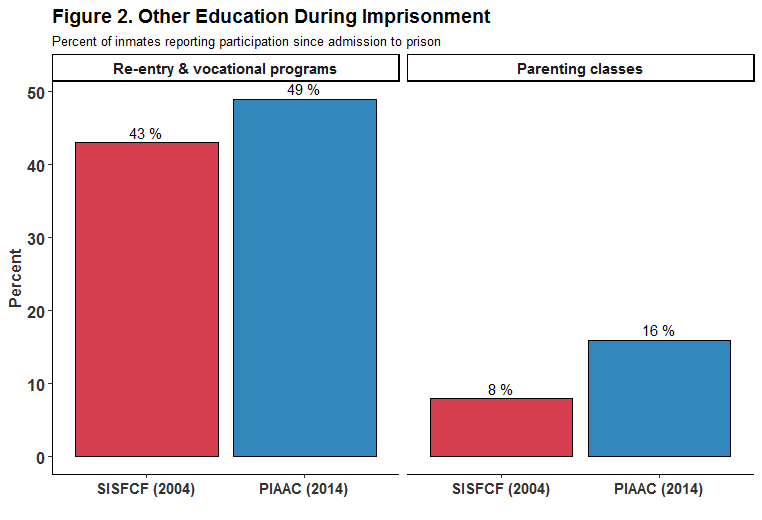 The PIAAC also provides a more holistic assessment of prisoners’ educational desires, intentions, and histories. The majority (63 percentv) of surveyed prisoners in 2014 reported that they would like to be enrolled in an academic class or program of study. Yet only 21 percent of prisoners are currently enrolled in a formal degree or certificate program. Among those who would like to be enrolled in a program, desire was the greatest for trade school certificates as well as traditional academic programs (from GEDs through Bachelor degrees).

Finally, the PIAAC asked prisoners why they stopped their schooling prior to incarceration. As displayed in Figure 3, the most common responses were that education was stopped by getting locked up or wanting to work instead. These results echo the concerns of other scholars about the substantial barriers disadvantaged young people face in completing their education.

Together, these results suggest that access to educational programming inside of prisons did expand between 2004 and 2014. However, access is still deeply limited, with the majority of inmates seeking education unable to access those programs. Prisoners remain under-educated relative to the general population and many of them had their educational trajectories cut short by criminal justice control. Given the benefits of education (and particularly higher education) for individuals post-release, expanding access to academic and vocational programs is smart policy. In addition, such programming makes prison environments more humane, benefiting both inmates and prison staff.  Access is still deeply limited, and the majority of inmates who seek education are unable to access those programs.

While President Donald Trump campaigned on a regressive “law-and-order” platform, it is an open question how much his administration will support criminal justice reform. Regardless, local and state-level governments will continue to drive policies. If the commitment to “evidence-based” practices is more than rhetoric, we should see access to educational programs inside of prisons continue to increase.

RAND Corporation. 2013. “Evaluating the Effectiveness of Correctional Education: A Meta-Analysis of Programs That Provide Education to Incarcerated Adults.” Research report.

i A new survey in this collection was fielded in 2016 so we should have more data available soon.

ii This outcome is a composite measure of several questions in the prison PIAAC survey. The base is a question that asks “During your current period of incarceration, what is the highest level of education you completed?” The possible responses included: 1. Grades 1-6, 2. Grades 7-9, 3. High School Diploma or GED, 4. Pre-associate education, 5. Attended trade school, college, or university; no certificate or degree received, 6. A certificate from a college or trade school for completion of a program prior to the associate/bachelor’s degree, 7. Associate degree, 8. Bachelor’s degree (e.g. BA, AB, BS), 9. Master’s degree (e.g. MA, MS, MEng, MEd, MSW, MBA), 10. Professional degree (e.g. MD, DDS, DVM, LLB, JD), 11. Doctorate degree (e.g. PhD, EdD), 12. No further education level completed.

For inmates listed as not completing a level of education, I changed their educational status to program participation without completion if they reported participation in academic programs. These questions asked about whether inmates had participated in classes or tutoring since admission “to improve your basic reading, writing, and math skills?” (remedial education) or “to prepare to take the General Educational Development test, or GED?” and “some other high school equivalency program or adult high school program” (high school and/or GED).

iii To construct this category, I summed across several overlapping questions in each survey. These are the SISFCF questions:

These are the PIAAC questions:

iv This question was identical in the two surveys, asking if inmates had attended classes in “parenting or child rearing skills” since admission / during the current incarceration.

v This variable has an unusually high number of missing or “don’t know” responses. If only non-missing responses are included, 70 percent of inmates would like to be involved in an educational program.

Michelle S. Phelps is an Assistant Professor in the Department of Sociology at the University of Minnesota. Her research is in the sociology of punishment, focusing in particular on the punitive turn in the U.S., and her primary lines of ongoing research are on the expansion of mass probation and contemporary criminal justice reform efforts.

Michelle S. Phelps is an Assistant Professor in the Department of Sociology at the University of Minnesota. Her research is in the sociology of punishment, focusing in particular on the punitive turn in the U.S., and her primary lines of ongoing research are on the expansion of mass probation and contemporary criminal justice reform efforts.