From Unassimilable to Exceptional 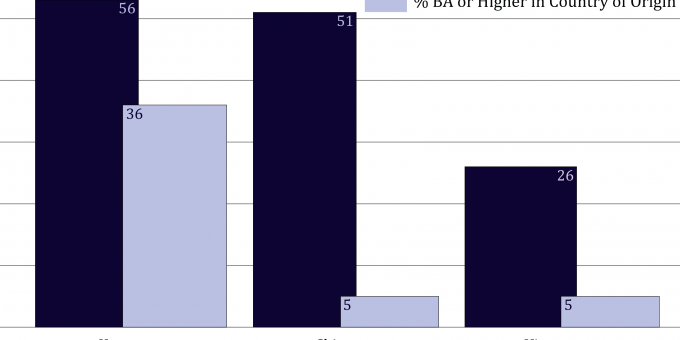 The Changing Status of Asian Americans

Following a recent public lecture in my hometown of Philadelphia, I was approached by a female member of the audience who asked where I had gone to high school. A retired high school teacher, she was curious about my educational background. She told me:

I was so happy whenever I had Korean students in my classes. They were my best students; they were so bright and worked so hard! And some of these kids, they have parents who don’t even speak English.

I had heard the same thing many times before from people who believed I shared their views about “Asian American exceptionalism”—that is, Asians are intrinsically brighter, more hard-working, and more high-achieving than other students. After all, I am Asian.

At elite universities like Harvard, Yale, and Princeton, Asian Americans typically comprise just under one-fifth of the entering classes, while in the prestigious public universities of the University of California system, they make up 43% of the undergraduate student body at Berkeley and 55% at UC Irvine. At 13% of California’s population and 5.5% of the U.S. population, Asian Americans are an undeniable presence in higher education.

While these cultural values are positive, it is worth remembering that less than a century ago, Asians were described as illiterate, undesirable, and unassimilable immigrants, full of “filth and disease.” As “marginal members of the human race,” they were denied the right to naturalize, denied the right to intermarry, and were residentially segregated in crowded ethnic enclaves. They were even, in the case of Japanese immigrants, forced into internment camps.

So how did the status of Asian Americans change so dramatically in less than a century?

I provide a four-part argument that bridges research in immigration, race, and social psychology to identify some mechanisms that support the “Asian American exceptionalism” construct.

In 1965, Asians accounted for 0.7 % of the U.S. population. Today, they make up 5.5%. For the past few years, the number of Asian immigrants has surpassed the number of Latino immigrants.

One of the most distinctive features of contemporary Asian immigrants as a group is their high human capital. According to the Pew Research Center, among recent Asian immigrants between the ages of 25 and 64, 61% have at least a bachelor’s degree—more than double the total 2012 U.S. average of 28%.

In this way, hyper-selectivity does help explain the emergence of racial, ethnic, and cultural stereotypes, even amidst disconfirming evidence. That is, if we don’t recognize the hyper-selectivity of Asian immigration, it’s easy to believe the specious argument that there is something about Asian culture that promotes exceptional educational outcomes. But this would be like making generalizations about Americans based only on commonalities among Ivy League graduates.

Obviously, not all Asian Americans are highly educated. For example, Vietnamese, Cambodian, and Hmong immigrants have lower levels of educational attainment than the national average for U.S.-born Americans. And the poverty rate for these groups—as well as that of Chinese, Koreans, and Vietnamese—is higher, too.

The Cultural Lag and the Persistence of Stereotypes

In light of the disconfirming evidence about Asian American exceptionalism, how do positive stereotypes of Asian Americans persist? Here, I draw on research in social psychology. Susan Fiske’s research has shown that individuals have powerful, largely unconscious tendencies to perceive and interpret others in terms that confirm their own expectations. So strong is this tendency that individuals often fail to see counterarguments—or, if they see disconfirming evidence, they either dismiss it as an exception or reinterpret it in ways that confirm a stereotype.

For example, a second-generation Chinese woman admitted in my research that she disliked high school and often cut classes. One day, she was caught leaving the school grounds, but the teacher readily accepted that she had to return home for a “family emergency.” Her Latina friends were never accorded this benefit of the doubt. Because the teacher assumed Asian American students were disciplined, hard-working, and high-achieving, skipping class was reinterpreted to confirm rather than deny a stereotype.

Cecilia Ridgeway has drawn on Susan Fiske’s research to explain how gender stereotypes endure, even as evidence mounts against them. Ridgeway notes that the content of people’s perceptions of what the “typical man” and the “typical woman” are like even lag behind changes in their own material experiences. Cultural lag helps stereotypes persist.

Following their work, I propose that stereotypes about Asian American students can lag behind material realities because they are validated and reinforced in gateway institutions such as schools. Teachers presume Asians students are smart, disciplined, and high-achieving students. The students then benefit from “stereotype promise”—the effect of being viewed through the lens of a positive stereotype that can serve as a performance booster—and it results in the “self-fulfilling prophecy” of Asian American exceptionalism.

Stereotypes—both positive and negative—have consequences. Based on interviews with 1.5- and second-generation Chinese and Vietnamese adults in Los Angeles, I have learned that positive stereotypes about Asian Americans are reinforced in schools by teachers and guidance counselors who presume that Asian students are smart, disciplined, and high-achieving.

Even some of the most mediocre Asian American students benefited from positive stereotypes. For example, some respondents were placed in Advanced Placement and Honors courses in high school, even though they’d demonstrated below-average performance in junior high. One student even failed the AP exam, but was placed in the AP track nevertheless.

These students did not believe that they were academically exceptional or deserving, yet once anointed as such by their teachers, they changed their behavior. They took school more seriously, put more time and effort into their homework, and they changed the reference group against which they measured their performance. As a result of changes in their behavior, these once-mediocre Asian American students earned straight A’s in high school and gained admission to top universities.

Critically, because their outcomes matched teacher expectations, the teachers can now point to these students’ stellar academic achievement as proof of their initial assessment about all Asian American students. They remain unaware of their role in generating a self-fulfilling prophecy (albeit a good one, in this case). Stereotype promise is the mechanism through which positive stereotypes can change the behavior of even some of the most mediocre Asian American students, thereby constructing “Asian American exceptionalism.”Just like inequalities at the low end of the educational spectrum, inequalities are reproduced at the high end of the educational distribution.

This counterfactual underscores that it is not something “essential” about Chinese or Asian culture that promotes exceptional outcomes, but a circular process unique to U.S. immigrants: Asian immigrants to the U.S. are hyper-select, the resultant positive stereotypes of Asian Americans lead to “stereotype promise,” and that leads to the self-fulfilling prophecy of Asian American exceptionalism.

Just like inequalities at the low end of the educational spectrum—where some students are assumed to be low-achievers, are tracked into remedial classes, and then “prove” their low achievement—inequalities are reproduced at the high end of the educational distribution where students perceived to be high-achievers (regardless of actual performance) are tracked into high-level classes and rise to the occasion, thus “proving” the initial presumption of their ability.

The Negative Consequences of Positive Stereotypes

When I presented this research at 2013’s annual meeting of American Sociological Association, an audience member asked what’s wrong with making positive assessments about Asian Americans based on their hyper-selectivity if those in the U.S. are, in fact, highly educated and evince high socioeconomic outcomes. In other words, what is wrong with positive stereotypes? Given the time constraints, I was unable to answer as fully as I would have liked.

First, making group-based claims based only on a hyper-selected portion of the population is not only specious reasoning, but it also essentializes all members of a racial, ethnic, immigrant, or gender group without considering in-group variation.

Second, not only do positive stereotypes place extraordinary pressure on Asian American students, but the stereotypes also make Asian Americans feel like abject failures and racial/ethnic outliers if they do not or cannot excel. Those who fall outside the “Asian American exceptionalism” construct respond by rejecting their racial and ethnic identities, claiming that they are “not like other Asians” or “not the typical Chinese.” In the process, they unwittingly reify the association between race/ethnicity with achievement.It’s not so much that there are “so many” Asian Americans attending top universities, but that there aren’t more. Who gets in (and who doesn’t) can be a sobering reminder that all stereotypes hold power.

Finally, positive stereotypes raise expectations of a group, and those elevated expectations become the perceived norm. As a consequence, we reduce the significance of achievement markers like a perfect SAT score or a 4.0 GPA if they are attained by an Asian American. The expectation becomes: if you are Asian American, you should have a perfect score. During the college admissions process, Asian Americans are suddenly at a disadvantage because they are held to a higher standard for admission. White students are 3 times, Hispanics 6 times, and blacks more than 15 times as likely to be accepted in a top university as Asian Americans with similar academic records. It’s not so much that there are “so many” Asian Americans attending top universities, but that there aren’t more. Who gets in (and who doesn’t) can be a sobering reminder that all stereotypes hold power.

Cecilia L. Ridgeway. 2011. Framed by Gender: How Gender Inequality Persists in the Modern World (New York: Oxford University Press). A path-breaking study of how the gender frame contributes to the persistence of gender inequality, even in domains that lack a history of gendered hierarchies.

Very interesting! Very succinctly stated. Thank you for putting it all together for me. My son is third generation Chinese American and I never thought about nhe could be negatively impacted by "exceptionalism".

80/20 makes the same arguments in regards to Asian Admissions into the elite universities on the east coast. Interesting.

[…] “From Unassimilable to Exceptional: The Changing Status of Asian Americans,” by Jennifer Lee. Lee continues her TSP series on the stereotype promise of Asian Americans, focusing in particular on educational outcomes and self-fulfilling prophecy. Turns out even “good” stereotypes can trap. […]

[…] outside-ness, which has some roots in the original trope of Chinese people in America as the “unassimilable other.” Existing in a society dominated by white supremacy – and the various ways white […]