Back in 1963, when her husband committed suicide, Katherine Graham took over The Washington Post, the newspaper her father had founded. When the Washington Post made the Fortune 500 list in 1972, she became the first woman CEO of a Fortune 500 company. In 1981, when he became the CEO at Coca Cola, Cuban-born Roberto Goizueta became the first Latino CEO of a Fortune Company. In 1986, Gerald Tsai, a Chinese American, became the CEO of American Can. Although Clifton Wharton was the CEO of TIAA from 1987-1992, TIAA did not make the Fortune list until 1998 when he no longer was CEO. Therefore, it was not until 1999, when Franklin Raines became CEO of Fannie May and Lloyd Ward became CEO of Maytag that there were African American CEOs of Fortune 500 companies.

Since 2000, there have been 151 white women and people of color appointed CEOs at Fortune 500 companies.  We have called them “the new CEOs” to emphasize that they are not, like the old CEOs—white males. But now, 20 years later, the new CEOs are not so new, and there are enough of them that it is possible to step back and look at the patterns that have emerged over these two decades. Numbers for some groups have increased (such as white women and South Asians), but the numbers for those in other groups (such as African Americans, Mexican Americans, and East Asians) have remained stagnant or decreased.

The Big Picture:  White Men and Everyone Else 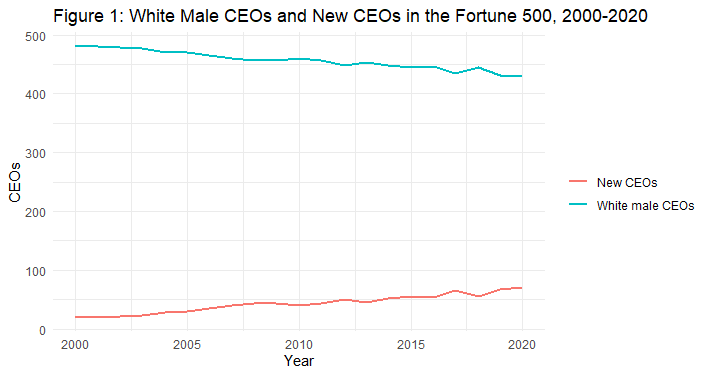 The big picture is that almost 90% of the Fortune 500 CEOs are still white males. As can be seen in Figure 1, the slow increase in “new CEOs”, from a total of 19 in 2000 to 71 in 2020, has been accompanied by a corresponding steady decrease in the number of white male CEOs. Still, the white men, who make up about 35% of the population, continue to be very much over-represented, and the gap between them and the new CEOs is still immense. White men may have lost power, but they continue to be the dominant group in the corporate elite— they held 96.4% of the Fortune 500 CEO positions in 2000, and still hold 85.8% in 2020. Moreover, since most of the seats lost by white men were lost to white women, and white women make up 6.8% of those who are now CEOs, whites still make up 92.6% of the Fortune 500 CEOs. Only 1% of the Fortune 500 CEOs are African Americans, 2.4% are East Asians or South Asians, and 3.4% are Latinx. 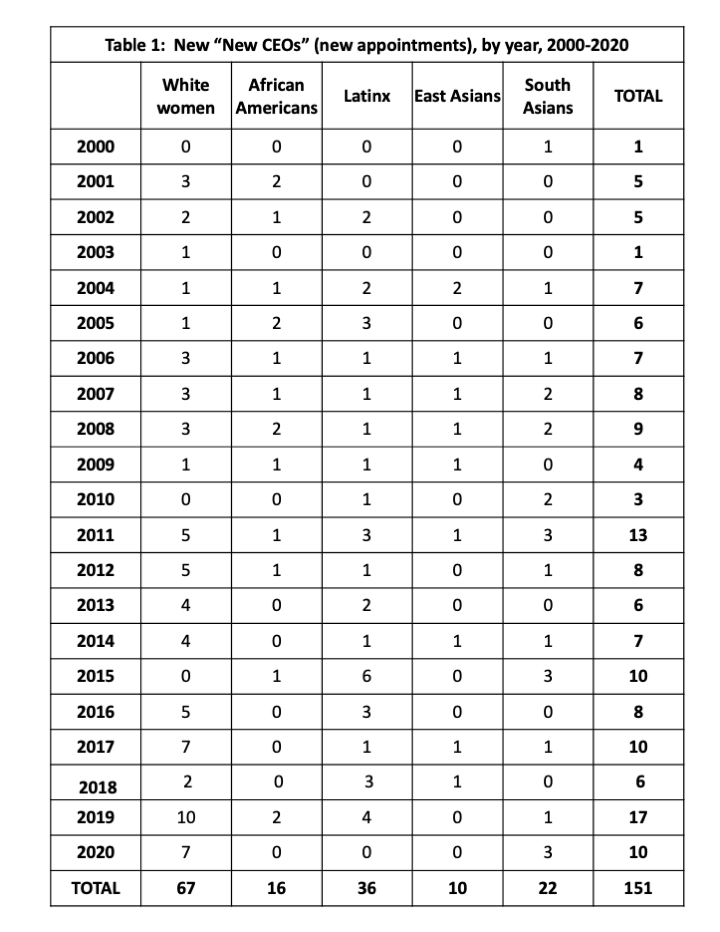 Another metric that helps reveal the long-term patterns is the number of new Fortune 500 CEOs appointed each year (as opposed to the number who were in office in a given year). As can be seen in the far-right column of Table 1, the number of white women and people of color appointed each year gradually increased to a peak in 2011, when there were 13, and then to another slightly higher peak in 2019, when there were 17. Whereas the 2011 peak was based on the appointments of five white women, one African American, three Latinx, one East Asian and three South Asians, the peak in 2019 was largely the result of the appointments of white women: 10 were appointed that year, along with four Latinos, two African Americans, and one South Asian. In 2020, 7 of the 10 new appointments were white women. 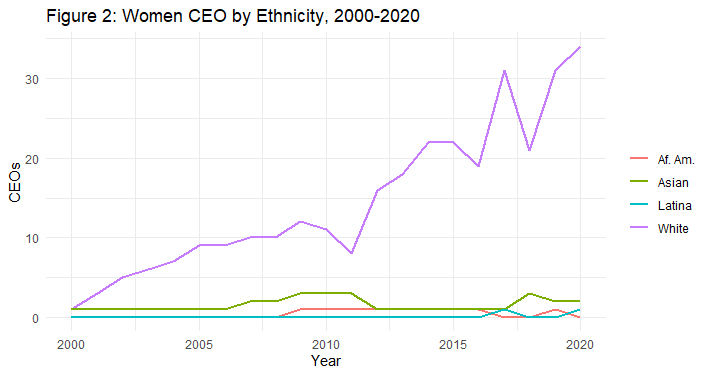 The white women who have been appointed since 2015 seem quite similar to the white women CEOs appointed before them:  they are very well-educated, tend to be from privileged backgrounds, almost all are married and have children, and many were, or still are, athletes.

These 72 well-educated white women include many who have degrees from Ivy League schools, as well as many who attended the flagship state schools where they grew up.  Fully 28 (or 38%) have MBA degrees, five have JD degrees, and others have masters or PhD degrees.

Almost all of those for whom I could find information were, or had been, married, and most had children.  Many are married to high-powered executive husbands, but notably, some have reported that their husbands had given up careers to take care of the children.  For example, Mary Dillon, the CEO of Ulta since 2013, a company that made the Fortune list in 2018 (at #471), is married to a biochemist who quit his job to stay home and take care of their three children.

As  these data indicate, even as the number of “new CEOs” are rising, white women make up a large proportion of these appointees. Among white women, a particular kind of woman is likely to become a CEO: one who is highly educated, family-oriented, and, especially in recent years, athletic. This suggests that race and “fit” with dominant elite culture remain considerable barriers to leadership of Fortune 500 companies.

Richie Zweigenhaft, Charles A. Dana Professor of Psychology, Emeritus, at Guilford College, is the co-author, with G. William Domhoff, of numerous books about diversity in the power elite, and, more recently, the author of GEEZERBALL: North Carolina Basketball at its Eldest (Sort of a Memoir). and Jews, Palestinians, and Friends:  45 Years at a Quaker College (Sort of a Memoir).

Richie Zweigenhaft, Charles A. Dana Professor of Psychology, Emeritus, at Guilford College, is the co-author, with G. William Domhoff, of numerous books about diversity in the power elite, and, more recently, the author of GEEZERBALL: North Carolina Basketball at its Eldest (Sort of a Memoir). and Jews, Palestinians, and Friends:  45 Years at a Quaker College (Sort of a Memoir).