Drawing Boundaries Around Who Counts as Asian American 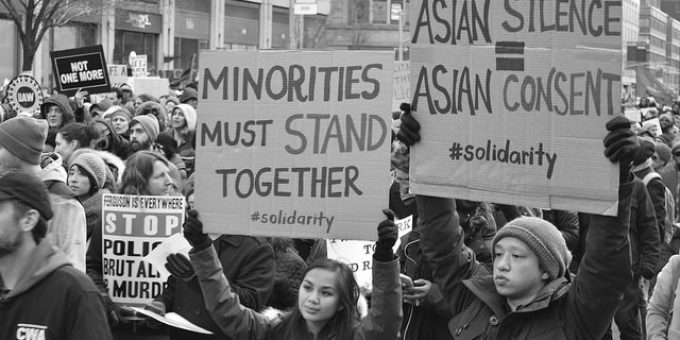 This May marks the 25th anniversary of Asian Pacific American Heritage Month. The United States looks much different than it did 25 years ago, as does its Asian American population.

In 1992, news headlines of Asian Americans focused on Korean grocers being robbed in poor, inner-city neighborhoods like Harlem, West Philadelphia, and East Los Angeles. These have been replaced with headlines of Sikhs, Hindus, and Muslims being shot, beaten, and killed across the country. Between November 2015 and November 2016, the nonprofit group South Asian Americans Leading Together (SAALT) documented 140 acts of hate violence, matching levels found in the year following the September 11, 2001 attacks.

More recently, Srinivas Kuchibhotla, a 33 year-old Indian engineer, was shot and killed in Kansas City by a white man who yelled at Kuchibhotla to “Get out of my country!” In February 2015, Sureshbhai Patel, a 57-year-old Indian grandfather in Alabama, was beaten so severely by two police officers that he needed spinal fusion surgery to repair damage to his back.

For example, while South Asian organizations have been vocal in their denunciation of these incidents and calls for greater accountability, pan-Asian voices seem to be far less muted today than they were in 1983 after the murder of Vincent Chin, or in 1992 after the Los Angeles uprising. Perhaps just as damning, The New York Times invited readers in November 2016 to participate in a video project on discrimination against Asian Americans, but failed to include any South Asian voices among nearly two dozen perspectives.

There is plenty of suggestive evidence, then, that South Asians in the United States are marginalized in the common public understanding of who counts as Asian American. In the 2016 National Asian American Survey, we sought a more systematic way to answer this question. In the survey, we randomly read a list of different groups (Chinese, Korean, Japanese, Indian, Filipino, Pakistani, and Arabs or Middle Eastern people), and asked our respondents: “Tell me if you think the group is very likely to be Asian or Asian American, somewhat likely, or not likely to be Asian or Asian American.” 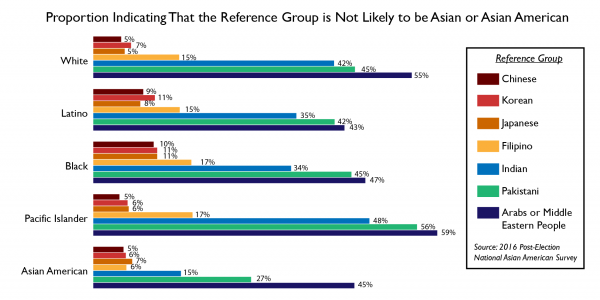 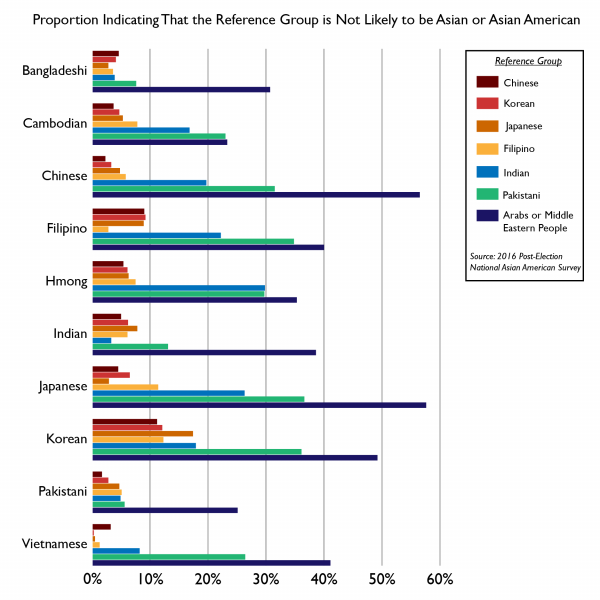 What our survey data reveal is that Americans—including Asian Americans—draw a sharp boundary between Asian and non-Asian that separates East Asians (Chinese, Korean, and Japanese) from South Asians (Indians, Pakistanis, and Bangladeshis) and, to a lesser extent, Southeast Asians like Filipinos.

Hence, there is a cultural lag between the demographic realities of today’s Asian American population, and the cultural perception of who counts as Asian American. Moreover, rather than expanding the boundary around the category to include newer South Asian groups, Americans—including many Asian Americans—exclude them from the fold.

But one of us is much more likely to be stopped for random security checks at airports, detained as we re-enter the country, perceived as a terrorist, and be the victim of hate crimes. These forms of anti-Asian discrimination have become more numerous after 9/11, and more acute after Trump’s proposed Muslim ban.

Yes, we are different genders, but that is less significant than our perceived racial differences. To fail to see Indians, Pakistanis, and Bangladeshis as Asian—especially when they see themselves as such—is to silence their voices. It also risks promoting an incomplete portrait of Asian Americans that ignores more threatening, dangerous, and even deadly forms of anti-Asian discrimination.

When Srinivas Kuchibhotla was murdered and Sureshbhai Patel was beaten by two police officers, not all Asian Americans identified with them. Rather than drawing internal boundaries, we should embrace our diversity and redouble our commitment to racial justice.

This article was adapted from “In the Outrage Over Discrimination, How Do We Define ‘Asian American’?” by Jennifer Lee and Karthick Ramakrishnan, NBC News, May 16, 2017.

Jennifer Lee is a Chancellor’s Fellow and Professor of Sociology at the University of California, Irvine. Starting July 1, she will join the Department of Sociology at Columbia. @JLeeSoc

Karthick Ramakrishnan is Associate Dean of the School of Public Policy at the University of California, Riverside and the founder of AAPI Data. @karthickr

Jennifer Lee is a Chancellor’s Fellow and Professor of Sociology at the University of California, Irvine. Starting July 1, she will join the Department of Sociology at Columbia. @JLeeSoc

Karthick Ramakrishnan is Associate Dean of the School of Public Policy at the University of California, Riverside and the founder of AAPI Data. @karthickr