What happens when huge numbers of people lose their homes?   Hundreds of thousands of Haitians lost their homes in the giant earthquake that struck Port-au-Prince in January.  Six months later, resource-poor and with little help from their government, they remain homeless.  When there are that many displaced people, where do they live?  Apparently, everywhere.  This week NPR reported that about 1,000 people are living in 326 make-shift structures on an 8-foot-wide median dividing one of Haiti’s busiest roads.

If private property is off-limits, public space fills up, and temporary housing isn’t provided, where are people to go?

Cutting Spending as a Merely Theoretical Solution to the US Deficit

Sixty-two percent of Americans think that the country should reduce spending in order to cut the deficit.  What do they think we should cut?  Nothing really.

Well, nothing except foreign aid. 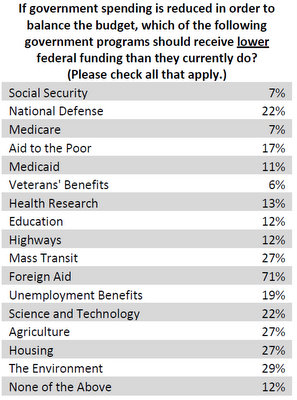 Kevin Drum at Mother Jones reminds us that foreign aid is about one percent of the U.S. budget.

…there were only four [other] areas that even a quarter of the population was willing to cut: mass transit, agriculture, housing, and the environment. At a rough guess, these areas account for about 3% of the federal budget. You could slash their budgets by a third and still barely make a dent in federal spending.

The Economist, via BoingBoing. 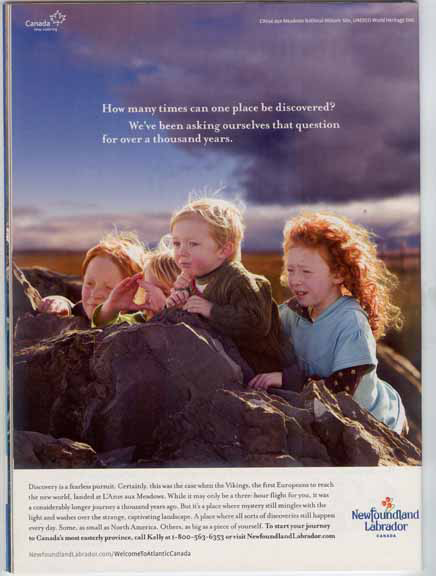 How many times can one place be discovered?  We’ve been asking ourselves that question for over a thousand years.

Discovery is a fearless pursuit. Certainly, this was the case when the Vikings, the first Europeans to reach the new world, landed at L’Anse aux Meadows. While it may only be a three-hour flight for you, it was a considerably longer journey a thousand years ago. But it’s a place where mystery still mingles with the light and washes over the strange, captivating landscape. A place where all sorts of discoveries still happen every day. Some, as small as North America. Others, as big as a piece of yourself.

As the recent Vancouver Olympics reminded us relentlessly, Canada was home to many peoples when the Europeans arrived.  The ad sanitizes this history, turning it into “discovery.”   Lim points out that “discovery” has a certain ring to it that “genocide” or “colonization” simply does not.

She quotes Ronald Wright, author of Stolen Continents, who points out how ridiculous it is to use the term “discovery” to describe what happened when Europeans arrived in North America:

…I was told by Dehatkadons, a traditional chief of the Onondaga Iroquois, “You cannot discover an inhabited land.  Otherwise I could cross the Atlantic and ‘discover’ England.”  That such an obvious point has eluded European consciousness for five centuries reveals that the history we have been taught is really myth…  those vanquished by our civilization see that its myth of discovery has transformed historical crimes into glittering icons.

The use of the myth of discovery in advertising like this demonstrates just how deeply many of us have internalized it.

Peggy R. sent in this great vintage ad for Cessna private planes.  Placed in 1941, it suggests that all families should have private planes after the war: 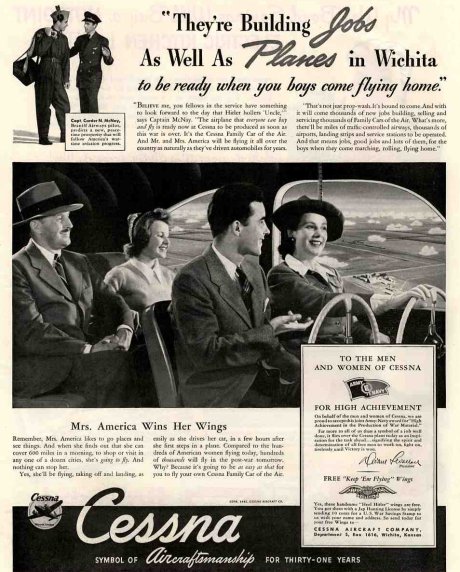 I spoke with my friend and Cessna expert, Stephen Wilson.  He explained that the G.I. Bill, which reimbursed veterans for educational expenses, applied to flying lessons.  Veterans, then, could be reimbursed for learning to fly and Cessna was trying to encourage all veterans and their families to take to the skies.

The Princess and the Astronaut

I can imagine a world in which gender difference did not translate into gender inequality… a world in which feminized tasks — nurturing others, creating beautiful and comfortable homes, cooking delicious, nutritious meals, and adorning oneself for the pleasure of oneself and others — were actually valued and, importantly, both respected and compensated in ways that reflected that value.

…at least, according to these “cookie pans” sent in by both Ash and Karen A.: 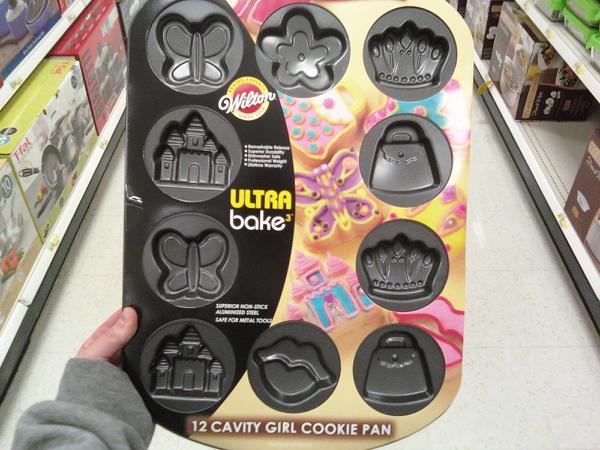 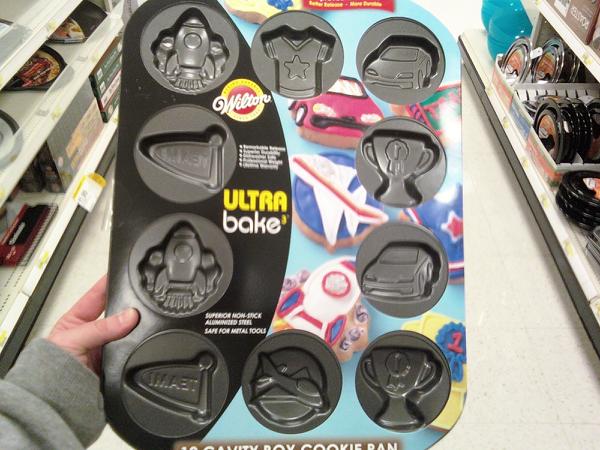 Mobile Phones and Traffic Deaths (What Am I Missing?)

Everyone knows phones and other devices are a major source of distraction to drivers, with deadly consequences. Six states — including New York and California — ban handheld phones while driving. The New York Times is running a major series on the danger, reporting that 11% of drivers are on the phone at any one time, causing 2,600 deaths per year.

I don’t doubt the danger. But this is my question: Where is the upward trend in traffic deaths and accidents? The number of wireless phone subscribers increased by 10-times from 1994 to 2006, but the rate of traffic fatalities per mile traveled dropped 18% during that time. Here’s my chart based on those numbers. I don’t doubt it’s dangerous to talk on the phone while driving, and texting is reportedly even worse. So I’m left with a few possible explanations. First, maybe cars are just safer. So there is an increase in accidents but fewer deaths per mile driven. Second, maybe distracted driving is more likely to cause minor collisions, because people jabber and text less in high-risk situations. (OK, I checked it out and those explanations won’t do: Accidents causing property damage only, per mile driven, have also declined, by 24%, from 1994 to 2007.)

Or third — and I like this idea, though I have no evidence for it — maybe phone-based distractions are replacing other distractions, like eating, grooming, listening to music, supervising children, or interacting with other passengers.

Can you explain this?

(And no, I don’t work for the telecommunications industry.)

Welcome, Women, To Your Special Section

Reader Clifford McC. and his (female) partner both receive Bicycling magazine (which, he explains, is more of a free advertisement that they get whether they want to or not).  In any case, this month’s issue was the 2010 Buyer’s Guide and, though the issues each received were identical, the one addressed to his partner was stickered: 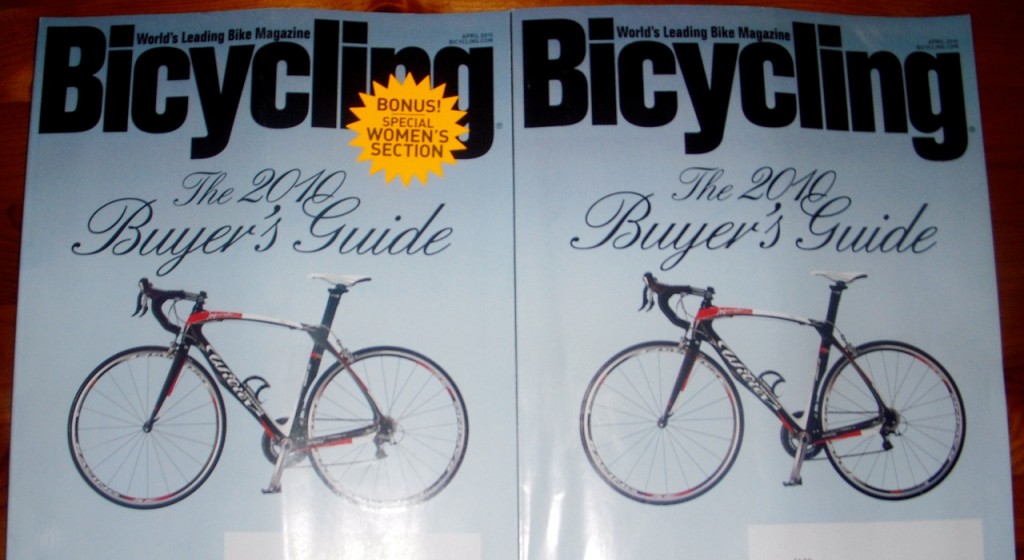 Perhaps they were trying to be inclusive, but a sticker advertising a special women’s section just goes to show that the magazine is, first-and-foremost, for men.

For the same phenomenon elsewhere, see our posts featuring websites selling dinosaur toys and Legos(see “exhibit three”), each with a special section for girls.

Multilingual and Knowledgeable, But Still a “Girl”

This vintage ad is a great example of the intersection of sexism and racism. She’s there for YOU because YOU, white family, are “important”: 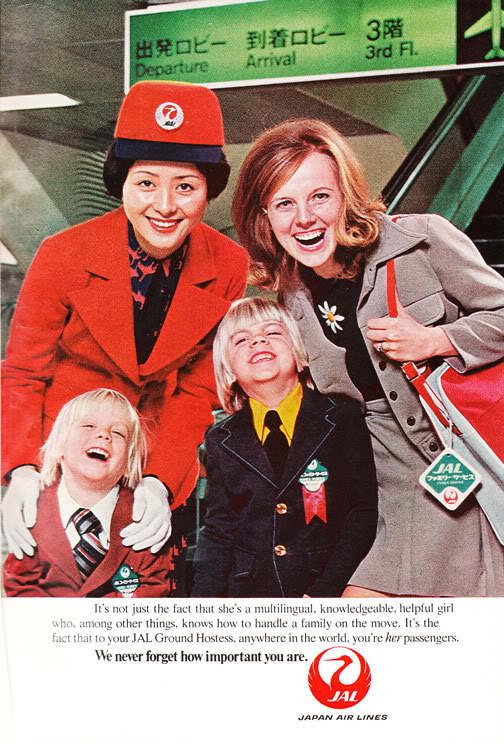 It’s not just the fact that she’s a multilingual, knowledgeable, helpful girl who, among other things, knows how to handle a family on the move. It’s the fact that to your JAL Ground Hostess, anywhere in the world, you’re her passengers.

We never forget how important you are.