Stereotype threat: The difference in performance measured when the belief that people like you (blacks, women, etc) are worse at a particular task than the comparison group (whites, men, etc) is made salient. 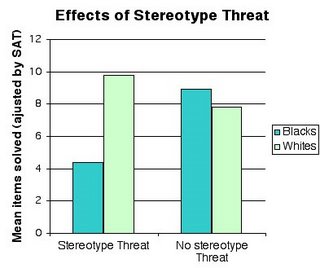 From: The Effects of Stereotype Threat on the Standardized Test Performance of College Students by J Aronson, CM Steelel, MF Salinas, MJ Lustina. In Readings About the Social Animal, 8th edition, edited by E. Aronson. Stolen from Wikipedia.