Against Giving Women the Right to Vote in Massachusetts

The vintage clipping below is a political advertisement from 1915 opposing women’s suffrage in Massachusetts. It claims that most women in the state do not want the vote, so if voting men gave women suffrage, they would be doing so against their will.  This, they claim, would be undemocratic.   This sounds ironic, but it makes sense in a world where men were suppose to be women’s political representatives.

The ad then goes on to try to demonize those women who do want the right to vote by associating them with other groups widely stigmatized at that time: feminists, of course, but also socialists, Mormons, and members of the I.W.W. The acronym stands for Industrial Workers of the World, an organization founded in 1905 as an alternative to the American Federation of Labor, reportedly consisting of anarchists, socialists, and union members (wiki).

Women in Massachusetts would be granted the right to vote on this day, August 18th, five years later, not by the residents of the state, but by Federal decree. 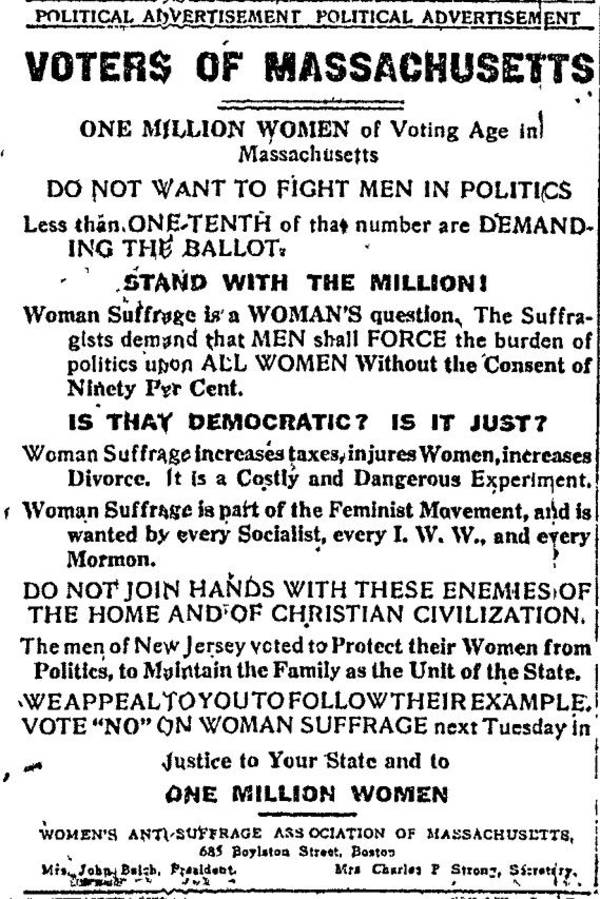 “Is Your Washroom Breeding Bolsheviks?”

Yesterday, while recovering from the flu, I was glancing through Jon Stewart’s new book Earth: The Book. In the chapter on commerce they included a vintage Scot Tissue ad that I initially thought was a joke. Turns out it was real, first appearing in the 1930s and urging employers to stock bathrooms with Scot Tissue products to prevent turning their employees into radical communists: 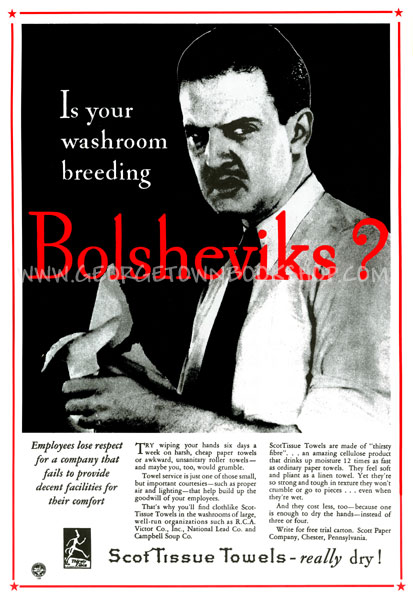 Employees lose respect for a company that fails to provide decent facilities for their comfort.

Try wiping your hands six days a week on harsh, cheap paper towels or awkward, unsanitary roller towels — and maybe you, too, would grumble. Towel service is just one of those small, but important courtesies — such as proper air and lighting — that help build up the goodwill of your employees. That’s why you’ll find clothlike Scot-Tissue Towels in the washrooms of large, well-run organizations such as R.C.A. Victor Co., Inc., National Lead Co. and Campbell Soup Co. ScotTissue Towels are made of “thirsty fiber”…an amazing cellulose product that drinks up moisture 12 times as fast as ordinary paper towels. They feel soft and pliant as a linen towel. Yet they’re so strong and tough in texture they won’t crumble or go to pieces…even when they’re wet. And they cost less, too — because one is enough to dry the hands — instead of three or four. Write for free trial carton. Scott Paper Company, Chester, Pennsylvania.

What I find fascinating is the idea that even minor discomforts might lead workers to become radicalized, and that one company would market to others based on the idea that they should respect their employees and keep them happy (at least in the way that serves Scot Tissue’s interests). Preventing the spread of communism isn’t, then, just about rooting out ideologues and rabble-rousers. The message is that becoming a Bolshevik may be a response to poor working conditions or treatment by management, and thus employers have a role to play in discouraging it by actually paying attention to potential causes of dissatisfaction and addressing them (in the bathroom, anyway), rather than simply a moral failing or outcome of ideological brain-washing.

I’ve always wondered if it was meant to be serious. I understand that we live in an ironic age, but it’s not like ironic, self-mocking and humorous ads didn’t exist before the 1990s. As time passes and inside jokes lose their meaning, it gets harder and harder to correctly interpret texts with their original meaning and context intact.

Anita Sarkeesian, creator of the fun Bechdel Test video we link to frequently (and blogger at Feminist Frequency), emailed to let us know about Jonathan McIntosh’s most recent video. McIntosh, who posts at rebellious pixels, has a knack for remixing elements of pop culture to make larger social points. He made the Buffy vs. Edward remix we posted last year.

Glenn Beck actually responded to it. Here’s the audio:

When I read part of the transcript first, I honestly thought Beck was joking and playing along. But after listening to it, I think he’s serious.

Of course, he’s also making some accurate points: Walt Disney was extremely anti-union and anti-Communist. He served as a friendly witness before the House Un-American Activities Committee in 1947 (transcript here). Others have accused Disney of being a Nazi sympathizer — swastikas and other symbols show up in some Disney cartoons — though The Straight Dope says Disney’s politics weren’t easy to pin down (for instance, the cartoon where Donald Duck is a Nazi eventually shows it to have been a nightmare; is that pro-Nazi or not?).

But back to Beck’s fascinating response, and how seriously he takes this “unbelievable attack.” He seems to imply the Fair Use doctrine allows propaganda, but also that Disney is somehow in on it (“apparently Disney doesn’t have a problem with Donald Duck cartoons now being remixed and politicized for the progressive left”). Of course, that’s the point of the Fair Use doctrine: whether or not Disney is ok with it isn’t relevant, because Fair Use protects the right to use otherwise copyrighted material. Specifically, according to the U.S. Copyright Office, “Section 107 contains a list of the various purposes for which the reproduction of a particular work may be considered fair, such as criticism, comment, news reporting, teaching, scholarship, and research.” It’s hard for me to imagine that Beck doesn’t know that; I’m sure he’s used material on his program at some point — say, news footage or historical photographs — and was able to do so specifically because of the fair use doctrine.

His response also reminds me of an episode of Fresh Air I heard earlier this week. Historian Sean Wilentz discusses how often Beck draws on 1950s Cold War-era ideologies, and that he has made them resonant again. Five years, saying “communists” and “socialists” in an ominous tone and implying that communism is in danger of spreading across America would have made you ultra-fringe, and I don’t think it would have had much cultural resonance. Now throwing around accusations of socialism and conspiracy theories isn’t at all out of the ordinary.

Given that resurgence in ideas that arose from the right during the Cold War, combined with Disney’s anti-Communist and anti-labor stance from that period, I think actually makes McIntosh’s use of old Disney cartoons even more effective as social commentary.

And just for fun, ikat381 remixed part of Beck’s response with an old Mickey Mouse cartoon:

Stephen W. sent in an amazing 9-minute cartoon touting the superiority of capitalism: 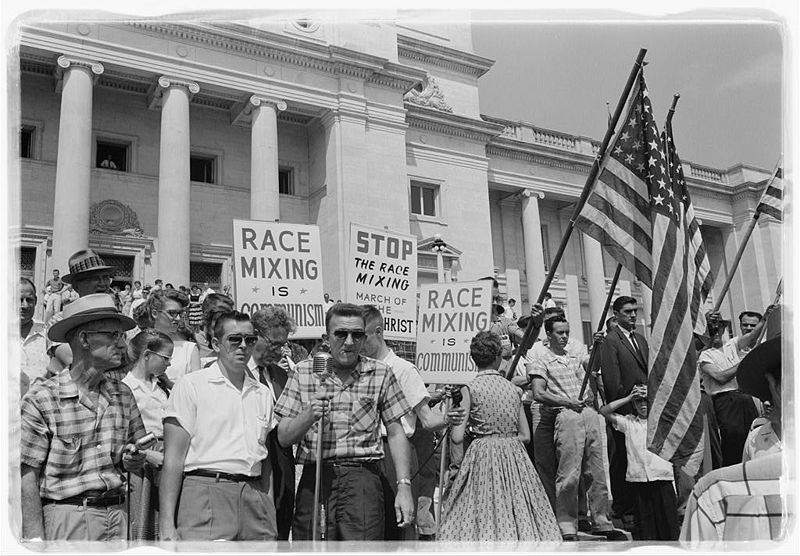 Thanks to Dmitriy T.M. for the link.

Before Terrorism, There was Communism

In this ad American Freedom Center at Valley Forge asks for donations to support the fight against terrorism: 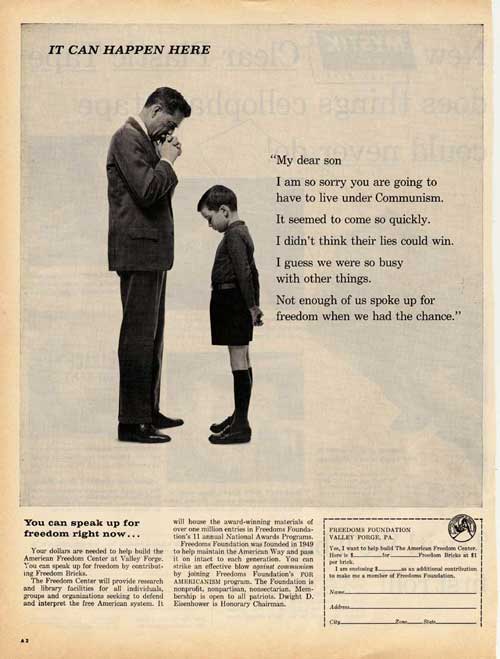 Demonizing Obama by demonizing youth, of course.  The text compares Barrack Obama [sic.] to Marx, Stalin, Hitler, Mussolini, and Castro and says that “Each and every one called upon youth movements!” 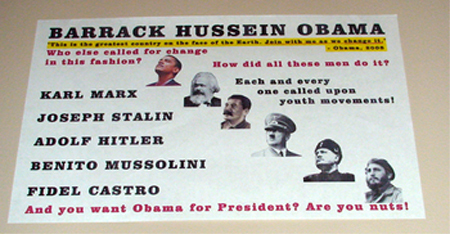 According to Shakesville, this was spotted in the John McCain campaign office in Pompano Beach, Florida. 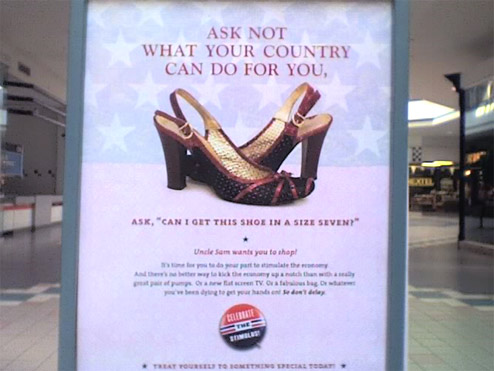 “Ask not what your country can do for you. Ask ‘Can I get this shoe in a size seven?'”