America Is a Violent Country

The terrible events in Connecticut prompted me to update an old post about comparative death rates from assault across different societies. The following figures are from the OECD for deaths due to assault per 100,000 population from 1960 to the present.

As before, the most striking features of the data are (1) how much more violent the U.S. is than other OECD countries (except possibly Estonia and Mexico, not shown here), and (2) the degree of change — and recently, decline — there has been in the U.S. time series considered by itself. Note that “assault” as a cause of death does not distinguish the mechanism of death (gunshot, stabbing, etc). If anyone knows of a similar time series for gun-related deaths only, let me know. 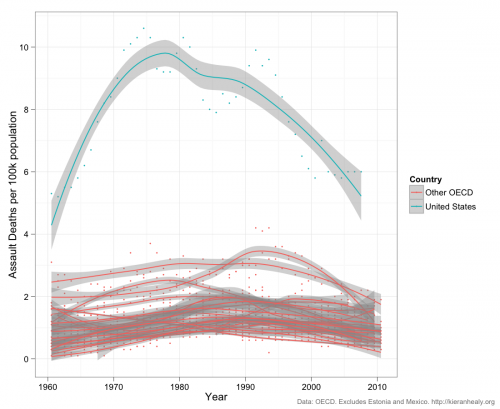 Here are the individual time series: 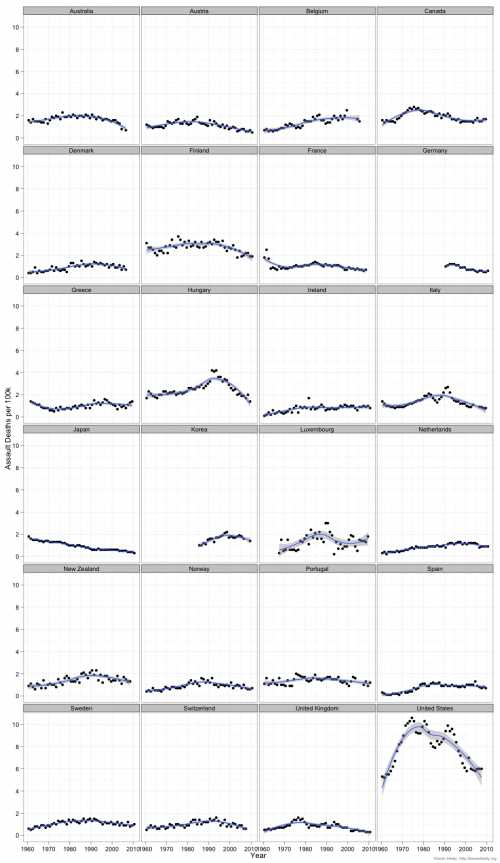 What can you say about a country born in violent revolution and which expanded through war and the threat of war?

This is not the best way to measure comparative violence between a large and diverse nation like the US and smaller (geographically and population) nations. The graph is greatly skewed because of inner city violence.

The same assault rates in a downtrodden part of town are not the same as the affluent enclave. The rates of assault are different between a small working class town can be different than an inner city crack den.

"The US is a violent nation" is a gross generalization that conflates the very real problems of some people with the living situation of others.

One odd thing - the numbers flip around a bit when you look at violent *attacks* rather than deaths. The UK has more violent crime than the US by a significant margin.

The sad thing is, when you look more closely at these deaths... the majority of violence is minority on minority, and the vast majority of all of it is at least tangentially related to the drug war. Shunting off a fifth of our population into a ghetto class and then creating a violent black market among them is the source of the majority of our extreme violence numbers.

So what happened between the 60s and the 80s?

It's almost funny that I live in a country with a homicide rate 4 times higher than US and in my city particularly it's 8 times higher.

[...] from the OECD for deaths due to assault per 100,000 population from 1960 to the present.[...]See on thesocietypages.org Sharen mit:TwitterFacebookGoogle +1TumblrPinterestEmailMoreLinkedInLike this:LikeBe the first to [...]

I don't understand. Yeah, so, the murder rate in the US is 4 murders per year per 100,000 inhabitants. In Honduras its 92. That's a chart more than five computer screens high. Why leave non-OECD countries out of our concerns? Are murder victims in poorcountries not a problem? 430,000 murders this year in developing countries but its the 13,000 that occur in the US that are a sociological problem? In comparison with the rest of the world the US's concerns about violence would flatline. Is a sense of global perspective a different academic discipline?Sorry to spoil an alluring graphic, but US violence is one of the world's most visible tropes, and it is the lack of understanding of voters in Western countries about the horror and misery of endemic absolute poverty in developing countries which informs migration, aid, and trade policies which perpetuate global economic inequality.Ethical sociology should be able to convey information responsibly - not play games with graphics to pique people's emotions and skew domestic political agendas. The global challenge of the century is economic development - wanna try doing some useful sociology?http://en.wikipedia.org/wiki/List_of_countries_by_intentional_homicide_rate

Theses on Guns, Apocalypticism, and American Religion | Bulletin for the Study of Religion — December 17, 2012

[...] culture.  When confronted with statistics that show that America not only has more guns, but more deaths per gun, than every other highly industrialized democracy, or when faced with the intransigence of the gun [...]

While guns are the biggest factor on death tolls for shootings (I'm not saying mass shootings, as for some reason at least Huffington only recognizes the three worst these past months), ond shouldn't focus on them alone. For most assaults, the justice abd welfare systems and segregation are just as important factors.

Adjust the data for large urban populations of african-americans, mexican-americans, asian-american, then compare the racial data to the country of origin. On a lot of measures, such as life expectancy and crime, breaking out America by race shows that all Americans are better off than their ancestral home. But to mix them together and compare it to white European nations results in this type of absurd chart.

Note that a large chunk of the decline since 1980 is explained by improvements in emergency medical care. it's not necessarily the number of assaults that has gone done, but percentage that end fatally.

So some European
nations have higher violent crime rates overall, but not higher homicide rates?

I wonder if this
might have any relation to the legality or non-legality of death penalty
(capital punishment)?

I'd love to see
the US homicide rate compared to other countries which still practice the death
penalty as justice. It might be interesting to see US homicide rates compared
to other countries which still use the death penalty such as India, Japan,
Nigeria, Uganda, Botswana, Indonesia, Malaysia, Thailand, Vietnam, Kuwait,
Oman, Lebanon, Jordan, the United Arab Emirates, or Iraq..... not sure if such a comparison of homicide rates would elucidate any relation or not.

the metric examined is asault deaths in the population. The decisive distinction is the greater lethality of united states assaults. the cause is obvious. Guns. The United States is no more or less violent than any other advanced nation. Only more deadly because of guns.

The U.S. has a lot of guns, so more homicides. The U.K. has a lot of beatings, but not many deaths. The number of guns in the U.S. probably helps keep the non-lethal violence rate down because starting trouble is more likely to get you killed here.

Also, comparing homicides in the U.S. to Europe, you have to look at race. White people in American are not hugely more homicidal than white people in Britain, and probably significantly less likely to get into drunken brawls.

From the Homicide section of the Obama Administration's Department of Justice Statistics:

"In 2005, offending rates for blacks were more than 7 times higher than the rates for whites"

Social inequaity!!  Why is there hardly any mention of social inequality in much public debate on the causes of violence in society and of so many other  of society's ills.