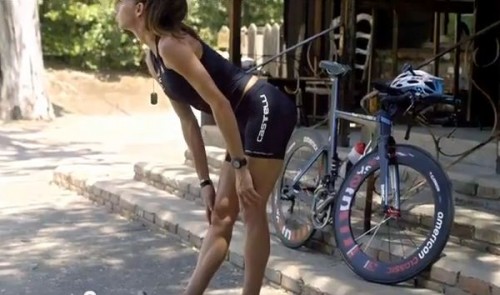 Earlier this month, Lisa posted about the objectification of female beach volleyball players at the Olympics, discussing the types of photos and poses that are used when reporting on different types of sports, including gendered differences.

Autumn B. sent in another over-the-top example of the objectification of female athletes. The commercial is for RoadID, a company that sells “identification gear.” Autumn saw it while watching the Tour de France; she found this shortened version online, which she says actually features less objectification than the original did.

The main focus of the ad is a slow investigation of various aspects of cyclist Jenny Fletcher’s body. The camera travels slowly up her leg, then shows her full profile before zooming in on her breasts as she zips up her shirt:

Jenny Fletcher has no dialogue. She exists as a body to be broken down into eroticized parts for the consumption of the viewer. As Autumn put it, it’s frustrating that, a fan of the “the male-centric Tour de France,” that “when they do FINALLY feature a female cyclist, it is as a sexual object.”

I think it's important that the one who is "Objectifying Cyclist Jenny Fletcher" is herself. With the Beach Volleyball players it's a different story (although they are not forced to wear bikinis anymore AFAIK).

This is irritating as both someone who wears and encourages others to wear RoadIDs, and as a woman training for a triathlon.  A letter might be in order.

Before we put on her the “victim”
label, we might consider this:

-For the most part, ad companies don't
do ideology (not to mention that the crew just wants to wrap it up
and go home, they're not “look at that babe, let's shoot her some
more”). During the planning process you're thinking on how you
would sell the product. Then disappointment sets in as the client
almost always has a pretty specific idea of how it should be, and
wants you to play it safe (if you don't have a clue as to why that
is, I can find you some links about the amounts of money involved in
advertising campaigns). This is the reason why most ads are
boring/predictable. It doesn't matter what I (or my partner) think, it's how the
client thinks it will sell and he needs to be happy with it (I've heard that the big ones have their
own teams that give them info on surveys and they run it through
psychologists and sociologists, but I've never worked at that level).
Again, I can give you some links regarding advertising, and some
differences between target groups.

-Now for the video itself:

0:00-0:02 She was asked to bend over,
then slowly stand straight while caressing her legs.

0:09-0:12 She was asked to lean on the
bike's seat. This is not a natural thing to do (you rest on a
bench/rock or lean against a wall because a bike is not stable) and
you can see around the 0:12 mark that the bike moves suddenly to her
right.

Say she's a victim because she was paid
a pittance (we don't know that), or because being attractive is the only
way into advertising. But it's (at best) disingenuous to imply that
she didn't know what the ad was about.

The commercial itself - well, just another unimaginative and obvious illustration of the male gaze.

But as for the objectification element - I know I'm wading into some troubled waters here, but I actually find pro athletes to be about the most acceptable objects for this kind of body fixation possible. I say that because there's absolutely nothing you can do with a camera that treats the athlete's body as an object even half as much as the athlete herself does, by the nature of the job. And also because, if we must have a visual landscape saturated with fetishized lady parts, I'd much prefer that they be the natural features of a strong and healthy adult athlete rather than the Photoshopped ones of a waifish teenager.

It's an unfortunate missed opportunity, though, to gloss over Fletcher's considerable strength (as though a muscled, powerful woman can't be sexy) to get to a close-up of her boobs.

I don't think we should delegitimize the 'hot hetero babe' stereotype as a valid, and possibly common, sexual orientation. It may be that what is portrayed in the ad aligns entirely with Ms Fletcher's deepest sexual preferences. I am not talking about some kind of random construct in this context. I mean, what if 'flirtatious sex object' IS her 'birthright' sexuality, ie, the only way of being that turns her on?

We need to start a fund to help all these attractive female athletes starring in advertisement and other prominent roles so they are not damaged by the "male gaze".

Very interesting comments on this one. Seems a lot of folks think she knew what would happen, she seeks it out - just look at her past, athletes should expect this, she's not a victim at all.....where have we heard things like this before?

It is completely irrelevant if the advertising agency or the business owner consciously thought about objectifying her. She IS objectified. She is a body to be looked at for her beauty and not for her ability as an athlete. This ad doesn't show a human it shows T&A to sell stuff. Objectification. Simple analysis really. Those who are fighting so very hard to deny what is apparent to anyone with basic sociological background might want to consider why they just don't want to accept that lots of women are objectified and that objectification creates/maintains power roles and stereotypes.

Brava Jenny. Luv'd this ad, it was done in good spirit. Gwen did you and Autumn miss that it was supposed to be funny? BTW Jenny just had her first pro win at Branson 70.3. Jenny is a smart woman, a great athlete and she does what she wants to do. How do I know this?  It was my choice to sponsor Jenny and I am glad she is riding American Classic wheels. Gwen, why don't you contact Jenny and get her take on this? If you feel she doesn't have a voice, give her one. Unless of course you are afraid to hear how she thinks of things!! Again go Jenny, have fun, ride, run, swim, win races, be smart and be pretty...do as you like!!

[…] Thanks for pointing that out Sociological Images. […]

triathletes are lame. and men volleyball players wear less than women. they wear nothing above the waist. i enjoy watching both sex's play. america ruin everything...and do gooders.

[…] Thanks for pointing that out Sociological Images. […]