Is There Any Product We Won’t Gender? (Hint: No)

[Note: The last item on this page might be NSFW in some workplaces; it’s behind a jump, but if you came to the post directly, be careful about scrolling down past the raincoats.]

Seven readers — Aneesa D., mouskatel, Brandi B., Lisa B., Jared B., Tom Megginson (of Work that Matters), and sociologist Michael Kimmel — all let us know about the attention Bic’s “for Her” pens have been getting, so I thought it was a good day for another round-up of the many items we have decided must be differentiated into versions for men and women. We’ve featured pens like this before; Bic’s are designed just for us ladies and our special pen needs, which apparently include the colors pink and purple and “easy glide” and “smoothness”: 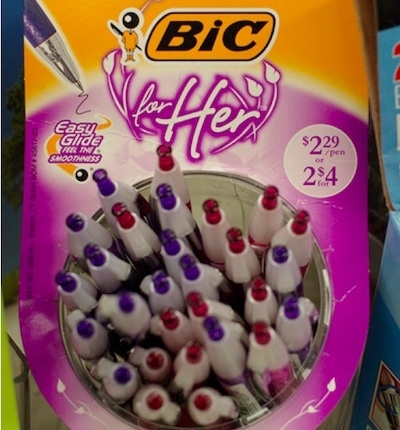 The pens are for sale on Amazon in the UK, and they’ve inspired a lot of push-back over the gendering, with people writing reviews mocking the product and its packaging. Buzzfeed featured a number of the reviews, which highlight the way that internet marketing certainly helps companies, but also opens up more avenues for the public to complain about or ridicule products in a very direct, immediate way that can quickly attract others to do the same — a much faster form of complaint than the days when you had to write a letter to a company’s headquarters:

But don’t worry, guys! There are products just for you, too! J.V. is happy to report that there’s now a hair dryer for men, called the Man Groomer. After all these years of wishing you had some way to quickly dry your hair the way women can, a solution is at hand: 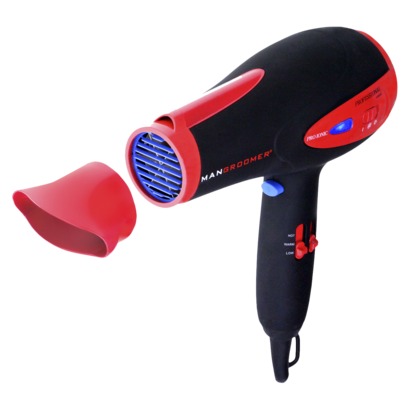 And Sean discovered that Planters is helpfully now selling cans of mixed nuts that are specifically chosen to support men’s health. Obviously women may eat almonds, peanuts, and pistachios separately, but when combined, these form a magical Man Food that addresses men’s unique needs for protein, vitamins, minerals, and fiber: 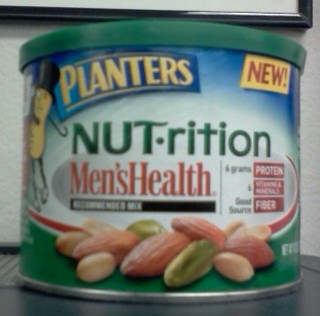 The Men’s Health on the can of nuts is because they are a product the editors of the magazine Men’s Health felt were a healthy option…The can of nuts aren’t gender specific they are just boasting their “award” of being well liked by the editors of this particular magazine. No different than when any other product has the label “recognized by *fill in the blank* magazine.”

In other gendered products news, Jessie L. noticed these face masks for sale in Taiwan. They are different sizes, but instead of simply presenting them as Medium and Large, for whoever might need those sizes, those size differences are clearly connected to expectations about gender. They’re differentiated by color, by the person shown wearing each one, and the pink package even has a heart-shaped hole that lets you feel the mask.

Similarly, Joonas L. saw his-and-hers versions of disposable raincoats for sale in Helsinki, Finland, and couldn’t see anything different about them except the color and the use of language (miesten = men’s, naisten=women’s) to explicitly gender them: 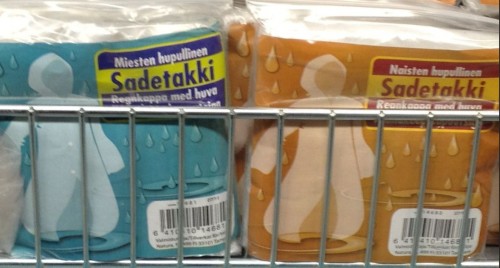 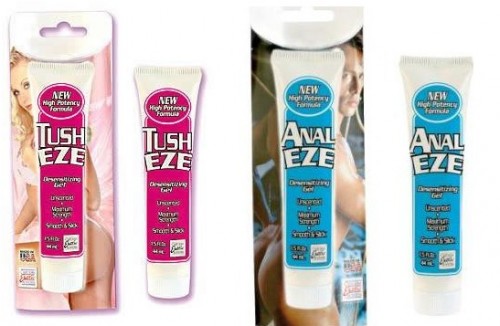 Nitpick: You do know that the "Men's Health" is likely a sponsorship or recommendation from the men's magazine, Men's Health and isn't, as you write, "specifically chosen to support men’s health."

Why do I suspect this is Men's Health magazine and not merely men's health in general? Probably has to do with the color, shape, and font of the logo. And the blurry (but recognizable) registered mark.

In this context, saying that the Planters mixed nuts are "specifically chosen to support men’s health" makes about as much sense as stating something with the title logo for Teen or Cosmopolitan refer to products specifically meant for "teen" or for "cosmopolitan" use.

The thing is, this marketing gimmick works because people think they are savvy consumers when they buy something "made especially for them". When a man is looking down the aisle trying to pick out a hair dryer, do you think he is more likely to pick out a generic dryer or one that says "for men" on the box, giving the (false) illusion that this product might better serve his needs than all the others? Yes, the pens are mind boggling (best I can tell they are trying to equate "for her" with the colors pink and purple) but I could see someone picking the Planters nuts over the generic store brand because of the "specially selected formula".

As for the raincoats, they might be of a slightly different cut, similar to how women's T-shirts allow more bust room than men's (but I could very well be wrong and it is just a color thing, no way to really tell from the pic), but I'm sure there is plenty of market research to show that women are more likely to buy a product called "Tush Eze" while men are more likely to buy something called "Anal Eze" due to gendered socialization towards/away from euphemisms (women have all kinds of fun words like hoo-ha and va-jay-jay that I have never heard a man use).

I have no clue what is going on with the facial masks, though. I'm going to be optimistic and assume they ran out of the blue medium masks instead of just assuming that only women would be able to fit into the mediums, and that the heart shaped hole/etc. for the red mask is more of the "Ooh, this mask is made specifically for ME. I'll buy this one over the generic" marketing gimmick.

I love the comments on the pens. I like to think that this means more and more people are understanding the gimmick of gendered product.

Admittedly, I like pink, I like pink a lot, I am also genderqueer... I wish they'd make more pink products without giving them a gender label, I'd LOVE a pink pen and would probably purchase such a product preferentially over pens of other colours (except ones with a glitter finish) but the gendering irritates me too much.

Comments on the pens are hilarious!

Read this yesterday and got a good chuckle. Then this morning I hear Gwen on NPR!

I came across this one a couple years ago. Women's earplugs. http://twitpic.com/19tp06

Feminist Friday: Gendered Pens « How can the poet be called unlucky? — September 1, 2012

[...] that a good chunk of the internet has already posted some excellent snark about this topic (see Sociological Images and Buzzfeed), but it made me laugh so hard that I couldn’t help but share as [...]

Thanks for finally writing about > blog_title < Liked it!|

I do not know whether it's just me or if everyone else encountering issues with your site. It seems like some of the text within your posts are running off the screen. Can somebody else please provide feedback and let me know if this is happening to them as well? This could be a issue with my browser because I've had this happen previously. Thank you|