She Works Hard For No Money

The politics of motherhood reared its head again last month when Hilary Rosen, who the news identified as a “Democratic strategist,” said that Ann Romney (Mrs. Mitt) had “never worked a day in her life.” (A NY Times article is here.)

“Worked” was a bad choice of words.  Raising kids and taking care of a home are work, maybe even if you can hire the kind of help that Mrs. Romney could afford.  Rosen’s comment implied that family work is not as worthwhile as work in the paid labor force.  That’s not such an unreasonable conclusion if you assume that we put our money where our values are and reward work in proportion to what we think it’s worth.  Mitt’s supporters use this value-to-society assumption to justify the huge payoffs Romney derived from those leveraged buyouts at Bain Capital.*

Even Mrs. Romney apparently felt that there must be some truth to the enviability of a career.   Why else would she refer to stay-at-home motherhood as a career?  “My career choice was to be a mother.”

Still, regardless of the truth of Rosen’s remark, it was insulting.**  Stay-at-home motherhood is work – a job.

But is it a good job?

A recent Gallup poll provides some more evidence as to why stay-at-home moms might be both envious or resentful of their employed counterparts.  Gallup asked women about the emotions, positive and negative, that they had felt “a lot” in the previous day.  Gallup then compared the stay-at-home moms, employed moms, and employed women who had no children at home. 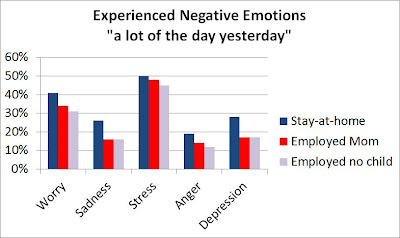 The stay-at-home moms came in first on every negative emotion.  Some of the differences are small, but the Gallup sample was more than 60,000 so these differences are statistically significant.   The smallest difference was for Stress – no surprise there, since paid work can be stressful.  Worry and Anger too can be part of the workplace.  The largest differences were for Sadness and Depression.  Stay-home moms were 60% more likely to have been sad or depressed.

Gallup also asked about positive feelings (Thriving, Smiling or Laughing, Learning, Happiness, Enjoyment), and while the differences were smaller, they went the same way, with stay-at-home moms on the shorter end.  Still it’s encouraging that 86% of them had Experienced Happiness 86%; so had 91% of the employed moms.

This isn’t about whether Ann Romney or I or other women of some means can afford to make a choice to stay home and raise kids. Most women in America, let’s face it, don’t have that choice. 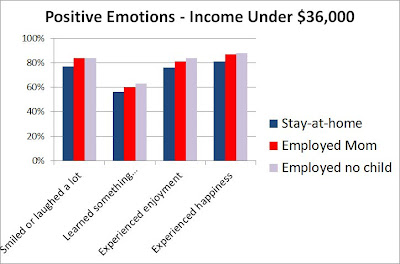 The Gallup poll does not offer much speculation about why stay-at-home moms have more sadness and less happiness. One in four experienced “a lot” of depression yesterday.  That number should be cause for concern.

Maybe women feel more uncertain and less able to control their lives when they depend on a man, especially one whose income is inadequate.  Maybe stay-at-home moms find themselves more isolated from other adults. Maybe they are at home not by choice but because they cannot find a decent-paying job. Or maybe money talks, and what it says to unpaid stay-at-home moms is society does not value your work.  Nor, in comparison with other wealthy countries, does US society or government provide much non-financial support to make motherhood easier.

But how right are we treating women who work hard for no money?

* For example, Edward Conrad is a former partner of Romney.  In a recent article in the Times Magazine, Adam Davidson writes, “If a Wall Street trader or a corporate chief executive is filthy rich, Conrad says that the merciless process of economic selection has assured that they have somehow benefitted society.”

** Hillary Clinton committed a similar gaffe twenty years ago in response to a reporter’s question about work and family “I suppose I could have stayed home and baked cookies and had teas, but what I decided to do was to fulfill my profession which I entered before my husband was in public life”

I would like to see how they define a stay-at-home mother.  If it is just any mother who is not currently employed/ not currently in the labor force, you're going to get a fair number of discouraged workers in your sample - which is not what the study is interested in.

Moreover, in the book "Opting Out" (HIGHLY recommended) she did a survey of Harvard graduates who were stay-at-home mothers.  She found that, although most of them expressed their decision as a "choice", when she looked at the narrative they told of how they made that choice, only about 5% really chose to leave, and the rest left because there wasn't enough accommodations for being a parent in their workplace.

This is just to say that the reasons people are not working are often complex and it could be difficult to pin down cause and effect.

I wonder if stay at home moms are more open with their feelings, since they don't have to self censor as much as someone who works outside the home.  I know I had to be more restrained and quiet when I was in the workforce, but now I have more opportunities to be honest, and will do so.

This study does not adequately answer questions about the emotional landscape of stay-at-home moms because it neglects the sociological variables of culture and standpoint. In societies and cultures that are not noted for the "nuclear family" model of family structure, you could probably find some variation from the numbers generated by that poll. I was unhappy as a stay-at-home mom in a small community where I had no extended family or consistent support, however the stay-at-home moms who had extended family around to help them were able to become involved with community activities that seem to bring them great joy. Staying at home with kids can be isolating and socially limiting, a social and family support network, the "village" that helps to raise the child, these are often lacking in the modern developed world family experience.

I wonder how much the ages of the children affect the surveyed mothers' well being. It could be that stay-at-home mothers are unhappier because they disproportionately care for infants and toddlers whereas employed mothers are likelier to have older children and feel better now that their children are not defecating everywhere or trying to eat the insides of electrical sockets.

How many are unhappy or dissatisfied because they are surrounded by a culture which doesn't value them and tells them they should be doing something else?  Is the happy homemaker a complete myth?  Are all all homemakers doomed to live lives of quiet desperation.

I'd be intrigued to see a similar study of men who choose to stay home and raise their kids.  Mr. Mom was played for laughs back in the 80s, but my understanding is that it's increasingly common.

Anecdata:
I have a friend who is leaving a high paying engineering job to be a stay-at-home dad while his wife works full-time.  He seems pretty happy with the choice.  That may have more to do with the fact that he HAS a choice, rather than having it imposed upon him by society.

I wonder how many of the people commenting ARE stay-at-home moms themselves, and are therefore (perhaps?) a bit quicker to question the poll's results.

It's unfortunate that it's a poll, and not an actual study with a peer-reviewed article to support it; if it were the latter, lots of the questions asked about the poll's definitions and methods would likely be answered.

I disagree that Rosen was implying that child care is not real work. I think it was a poor choice of words, but her intent was to bring up the idea that Ann Romney has not had to work (outside the home) - so how could she relate to mothers who have never had the choice not to work (outside the home)?  The question was relevant to the campaign because if you look at the policies Romney has supported, he does not seem to value the child-rearing work of mothers on government support, as seen in this article: http://theweek.com/article/index/226820/will-romneys-views-on-welfare-moms-haunt-him

I think what this incident shows, is not how much the Romneys value the work of all mothers, rather how adept Ann is at shifting a conversation to something that better suits her needs. Of course she didn´t want to have to explain that she is privileged enough to be able to raise five children on her husband´s income only. Rosen never got the chance to bring up Romney´s policies because Ann had already taken the conversation elsewhere. But I think we all understand what Rosen was really implying. Even Ann understood.

"Rosen’s comment implied that family work is not as worthwhile as work in the paid labor force. " No it doesn't.  You're taking what is basically semantics (using the word "work" to refer to jobs outside the home) and trying to spin it into a value judgment.  This is irresponsible journalism.

I think that for something to count as a "job" or a "career", the amount of work that goes into it is irrelevant; someone has to pay you for it.

Saying that being a stay-at-home mom is a job sounds just as corny as someone who says that their full-time job is "looking for employment", being a student, or taking care of the home.

"Maybe women feel more uncertain...when they depend on a man...."

Appears as though the author is assuming that all stay at home moms are in relationships with men. I checked the Gallop data and found no mention of that.

It might be helpful to see the responses of unemployed people without kids. I know a lot of people feel more depressed and sad when they don't have the validation of someone paying them for using their skills.

[...] physical attacks upon its organizers. Goddammit.The Society Pages has an interesting post about the self-reported happiness levels of women with various types of family lives. It turns out that being a mother kinda sucks.The students striking against university tuition [...]

As a stay-at-home mom to 3 girls ages 7,5 and 2, I often say I ride an "emotional roller-coaster" all day. Children haven't learned to control their emotions like adults, so they can go from very happy one moment to screaming and crying the next, then back again. This to me could explain the answer to why those stay-at-home moms felt negative emotions more strongly than their working counterparts. I do wonder about results stating that stay-at-home moms experience less happiness since that has not been my experience. I have felt the greatest joy of my life as I get to experience all these little daily moments with my children that I would miss if I were working somewhere else for 8+ hours a day.

I discussed this article with my 90-year-old grandma who worked for many years as a home economics teacher and has two advanced degrees in her field. She feels that the happiness of a stay-at-home mother depends on how much control she feels over her own life--her opportunities to progress and make decisions regarding her future. Also, I agree that calling being a stay-at-home mom a "career" sounds pretentious, but at the same time people pay a lot of money to have other people do it for them (i.e. nannies, daycare, maids). Why is it that being a nanny or a daycare provider can be a career, but not a stay-at-home mom?