In a previous post, Lisa referred to Peggy McIntosh’s famous essay on White Privilege: Unpacking the Invisible Knapsack. One of the many privileges that McIntosh identifies is that, as she writes, “I can turn on the television or open to the front page of the paper and see people of my race widely represented.”

This statement resounded when I saw the images below from a 2011 Scottish Woolovers catalogue. Further, I was reminded that it’s not only a matter of whether we see people of our race widely represented, but also of how the media makes these portrayals. 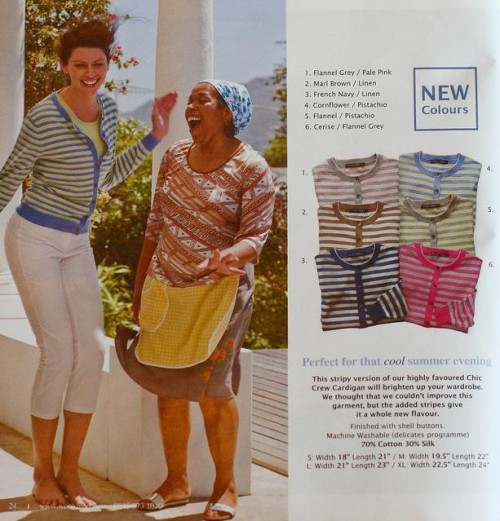 The white woman in this ad is modelling a cardigan sweater. Meanwhile, the woman of colour in the photo is…well, that’s an interesting question. Nothing that she is wearing is for sale; she’s just there, wearing clothing that has no relevance to the advertisement. 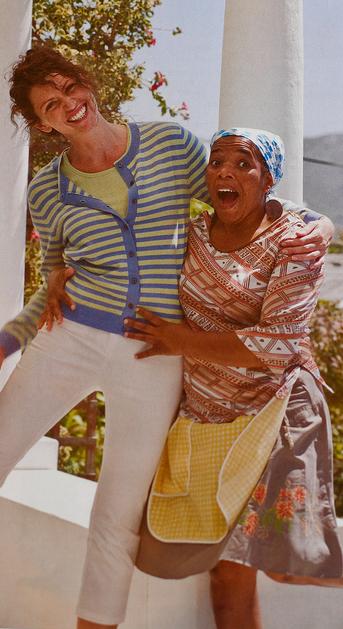 Normally, you’d expect that a woman in a fashion catalogue would be there to model clothing, but in this case, the woman of colour doesn’t have such a role. She is a prop for the white model, there to frolic and help illustrate the benevolent and fun-loving nature of the fashionable white model, clad in an apron that marks her as potentially a servant of some kind. She’s not there to directly market clothes to a white target market.

SocImages has addressed other examples of privileged representations of white women in catalogues; a discussion of a Punjammies catalogue highlighted the exclusive reliance on white women as models, while portraying women of colour as labourers and beneficiaries of the good will of the white, female target market. In a similar vein, we also had a post illustrating a comparable trend in the representation (and lack thereof) of people of colour in films. It is a function of our unearned privilege that, when those of us in a privileged position come across racialized images and representations like these, it is all too easy to miss or ignore their problematic nature.

Thanks to Flickr user Wishiwerebaking for sending us these images.

Hayley Price has a background in sociology, international development studies, and education. She recently completed her Masters degree in Sociology and Equity Studies in Education at the University of Toronto.

Ok, here's an amusing detail that I discovered:

I went to Wool Over's website to try to find this sweater, and find it I did. The cardigan is modeled by a woman of African descent, and the outfit she's wearing is almost identical to that of the model from the catalog: http://www.woolovers.us/cotton-silk/womens/stripy-summer-vee-cardigan.aspx

I looked through all the other product listings, and she is the only model who isn't caucasian.

Even the columns of the white house echo the Doric columns from the sort of English country home/Southern plantation thingy. The woman of color looks so cute and fun - why couldn't they have put her in a pair of pedal pushers and her own cardigan? How hard would that have been?

Yikes, they even put her in an apron and headscarf? I didn't know the "Mammy" look was in this year.

Wow. I saw the image and wondered which decade it was from. Assumed it must have been the 60s or earlier. Then I saw the date. Holy. Shit. That is horrifying.

Not only is she a prop, she enhances the subject's cultural capital: if you'll notice the caption says "Perfect for that *cool* summer evening." Hanging out with black people makes white people cool, obviously.

So they're saying that a woman of color should think about wearing their sweater only if she's smart/educated/reading but not if she's working class?

[...] we do see racialized bodies in “ethnic food” commercials they serve as props to enhance the foreignness of the food. In the Lassie Toverrijst commercials, which employ the same [...]

[...] we do see racialized bodies in “ethnic food” commercials they serve as props to enhance the foreignness of the food. In the Lassie Toverrijst commercials, which employ the same [...]

Get over yourselves. Your constant complaining has had a significant effect to the extent that now the White man is an endangered species in the UK and the BBC and all adverts are now 'Blackverts'. This virtue-signalling for a small minority of the British population is actually causing racism as people are fed up with it.
Black diaspora are even more racist as all their books, music, films, magazines, newspapers, history etc. all exclusively feature black people and every comedian and commentator constantly goes on about the persecution, slavery and racism. Well they turned the Oscars black and in 2022 Will Smith showed why the Oscars should be segregated like the MOBOs.