Collateral Damage in the Evolution of Language

Jessica B. sent in an excellent example of the way that symbols evolve.  Language is just a set of symbols.  The squiggles and lines that make up “cat” don’t look anything like a cat, but English speakers will know what it refers to.

And language, of course, evolves and sometimes that evolution has odd and unintended consequences.  Consider all those companies, like Object Management Group, whose acronym, out of nowhere, had a new, blasphemous meaning.

Jessica’s example involves the new word, “lol,” which just happens to also be a symbol for drowning: 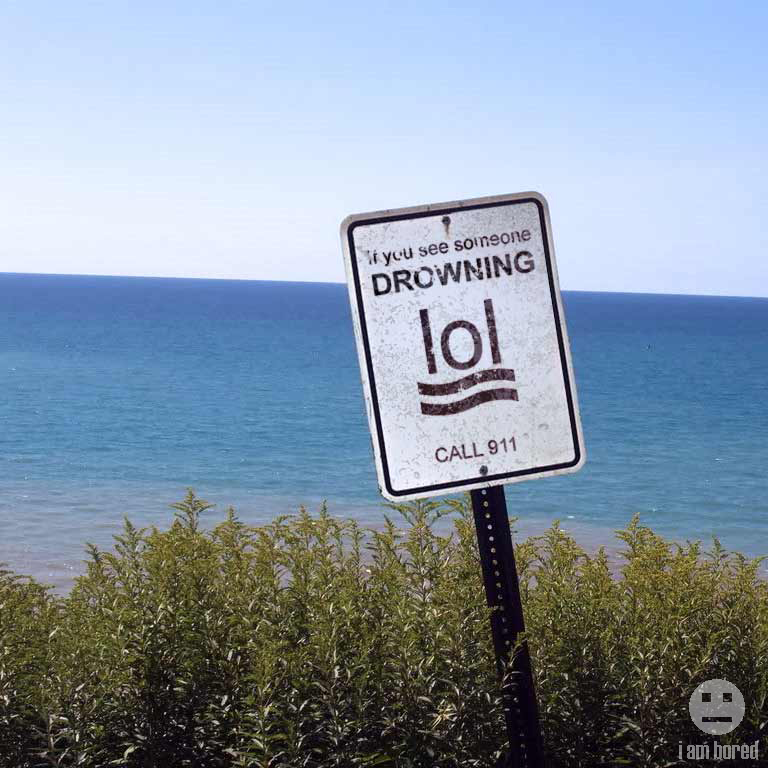 Is this sign really older than the acronym "lol," which has been in usage since at least the mid '90's?
I mean I take this sign as a simple visual diagram representing someone drowning, no lols about it.

Or is ROFL going to be our new directions should we ever catch on fire?

Shouldn't that be the social construction of our awareness of reality?

Wow, I did not even notice that that said "lol" until I read the full post; to me the picture just looked like a drowning stick figure.

“We, as a society, have agreed that ‘lol’ has a meaning separate from itself and the overall accepted meaning of this symbol is laughter, as opposed to the original intended meaning of a person drowning.”

While I see Jessica’s intention, I would suggest that the image on the sign must be interpreted in its entirety: the combination of “lol” and the two parallel wavy lines underneath (representing waves). Separately, the “lol” itself does not, in my opinion, constitute the “original intended meaning of a person drowning”. Only when placed in the context with the wavy lines, does the entire image suggest a person drowning.

I'm 25, and my first instinct was to laugh at the lol, then to realize that it was supposed to be a drowning person. I know I've seen those signs before, just not for a while.

I saw lol after reading the post, before that I just saw a drowning figure.
Weird?

A friend has had this picture for some time, something he picked up off of /b/ on the interweb. When I first saw this picture, I had a moment where I first read lol but as I realized that did not make actual sense, the drowning person came into view. Thought it was really interesting then and now.

On the topic of lol - I have a friend whose mom insists on signing emails "LOL, Mom" which she uses to stand for "Lots of Love." Of course this results in messages that seem to mean the opposite of what she wants. My friend was sick last month and got a message saying. "Sorry to hear about your cold. LOL, Mom."

"Nobody heard him, the dead man,
But still he lay moaning:
I was much further out than you thought
And not waving but drowning."

In the same vein as LOL, the Wisconsin Tourism Federation (WTF) recently changed its name to avoid some unfortunate implications.

I am 44, and I took the sign as "laugh out loud" until I saw the wavy lines at the bottom, and even then, it took me a second or two to see the other meaning. I've been using the web since my late 20's though...so...I dunno.
My generation is seen as the "in-between" generation in lots of things anyway. Possibly we are also in between the "web generation" and the "lack of the web" generation as well.

I do remember my various aunts and uncles signing birthday cards with Lots Of Love (lol) though.

Hmm. What's interesting to me is that I only recognized the lol as such because I am an English speaker, and yet at the same time my English lets me understand the writing above it which tells me it's an image of a drowning person.

SO I guess the real question is, for those who couldn't read the sign and thus relied on the image, is this "lol" or a drowning person? Is lol common in non English-speaking communities? Would a child understand "lol" before the word "drowning"?

I honestly did not even see that it was a drowning person. I looked at it after reading for at least a minute trying to work it out. I figured it was a 'shopped sign.

This is a really great article and point...however, I think the article itself, and the links to it with the title "If you see someone drowning, lol"...kind of predisposes people to see the sign as LOL and not a symbol of a person drowning. I think, if I were to see that sign without this article...I would see it as a stick figure drowning. It's only the fact that the article is coupled with the picture, that makes me see it as LOL.

Letters are symbols too. This is why they are succeptible to change their meanings acording to how they are presented.
It might be because I am not an American, but I only thought of a person drowning after seeing the whole context. For me this is "lol" and "bacon", because in Mexico, the drowning signals are diferent. And I spend too much time in the Internet.

I thought this article was a bit of a stretch -- a surfeit of academe-speak about something ultimately quite obvious.
"...clarifies the results of differences between intended meaning and interpreted meaning, as well as indicating the importance of social construction of language and society as a whole" sounds like a phrase taken straight from a first-year paper. How does the sign 'clarify'? What 'results'? What exactly is "The importance of social construction of society"? Isn't that rather redundant?
The post is more revealing of the social construction of language by academics to make work for themselves... :P (and I'm an academic myself, so please don't take offense, but to be blunt most social science falls under this category...)
Plus I agree that this looks photoshopped: the darker edge at the top of the sign doesn't make sense in 'our reality' (the sign is not bent, so the top edge should be lighter), the words run at a slightly different angle to the top of the sign, and the way the letters have been 'aged' is too uniform.