Tom Megginson blogged about a billboard advertising Gaylea spreadable butter that made fun of brutality… affixed to the back of a women’s shelter in Ottawa: 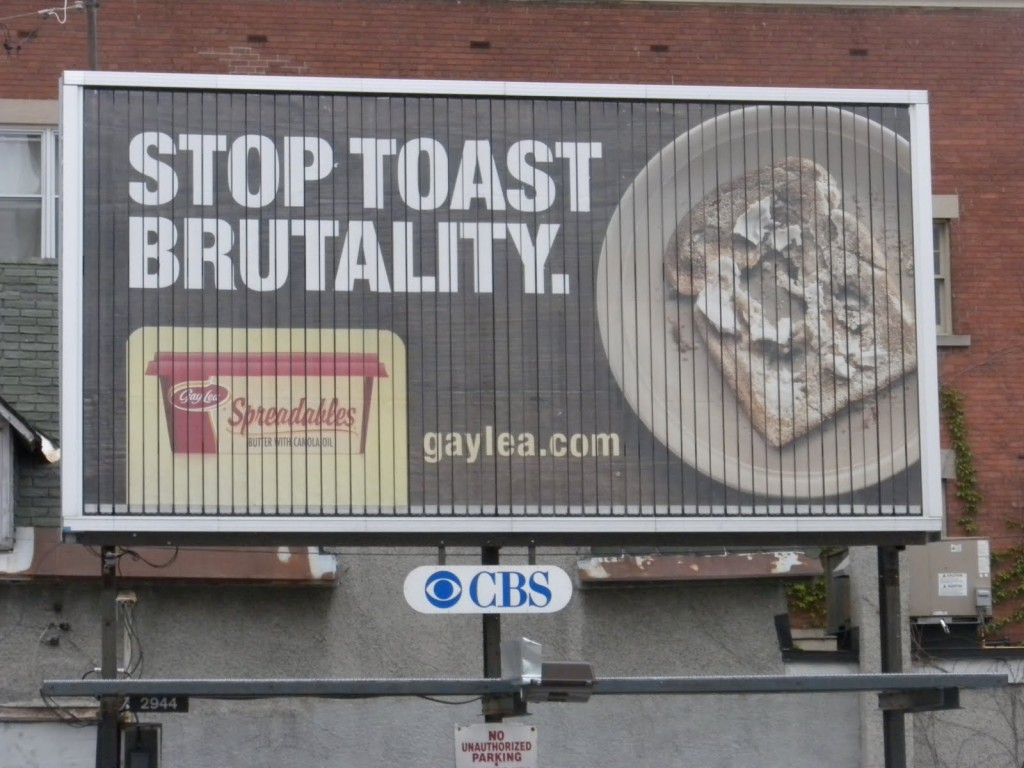 Would You Help a Battered Woman If She Was Dressed “Provocatively”? (Jezebel Cross-Post)

This was originally posted at Jezebel by Lindsay Robertson. Thanks to Chloe A. at Feministing for drawing our attention to it as a possible cross-post!

Last night, ABC used hidden cameras and actors to see what regular people would do if they saw an obviously abused woman being harassed by her boyfriend. A lot of regular people failed the test.

The highly-successful 20/20 spinoff What Would You Do? brings social experiments to television, using variables to test how ordinary people react to situations such as seeing someone steal a bike in a park, or witnessing a deli clerk give a blind man incorrect change. Lately, the show has been raising the stakes, and last night reporter John Quiñones showed us what restaurant diners do when they see a very obviously bruised woman getting picked on by her boyfriend at a nearby table.

As they often do, the producers used different variables to see if they changed the outcome, staging the scene with both white and African American actor “couples” to see if race affected bystanders’ willingness to step in. In both cases, the actresses were helped by fellow diners (though fewer men got involved with the African American couple):

But then they tried a different variable: the women’s clothing. When the same actresses dressed “provocatively,” and we’re talking clothing that’s pretty average for a Saturday night, not Julia Roberts’ blue-and-white monokini-thing in Pretty Woman, nobody came to their rescue. Diners complained to the staff that the couple were “upsetting customers” and one man told the abusive boyfriend actor that the two were “embarrassing themselves as a couple,” but nothing like what happened when the women were dressed conservatively occurred in this case, and in fact, two middle-aged female witnesses joked with each other about the beaten-up woman being a prostitute.

While obviously the show is highly unscientific (notice that in the second video, the white actor is inexplicably dressed up in a suit) and meant for entertainment, it can’t be a bad thing to force viewers to think about issues such as racism or domestic violence. Maybe the next time they see someone being abused, they’ll be more likely to step up. (After all, they might be on TV!)

What Would You Do? [ABC]

Send an email to Lindsay Robertson, the author of this post, at lindsay@lindsayism.com.

Whom Should Rape-Prevention Campaigns Address?

Monica C., who teaches ethnic studies and works with survivors of interpersonal violence, sent in this 9-minute satirical video (posted at Consent Turns Me On) she created for Sexual Assault Awareness Month. It highlights the way that rape prevention campaigns often put the onus on women to avoid being raped, providing lists of things to avoid doing (that basically add up to never doing anything where a man is present, ever), rather than focusing on educating men about not raping women.

Trivializing Domestic Violence: “A Kiss with a Fist” Video

Liz C. sent in the video for the song “A Kiss with a Fist (Is Better Than None)” by Florence and the Machine. She analyzes it nicely:

The lyrics seem to condone domestic violence, and the video seems to trivialize it, in the sense that the lead singer prances and jumps around while singing about getting punched in the face, having her leg broken, and having plates broken over her head by her partner, while she, in turn, hits and slaps him, breaks his jaw, and refers to “The Burning Bed” by setting fire to their bed.

A kiss with a fist is better then none

A kiss with a fist is better then none

UPDATE: Reader Kyle pointed out another example, Chester French’s video for the song “She Loves Everybody.” He asks whether we can imagine seeing this video if the gender roles were reversed:

And commenter Dave gave us a link to a recent discussion of this topic at Jezebel.
Also see our post on sexualized violence in Lady Gaga’s “Paparazzi” video.

Jayna T. and V. sent in a number of commercials for home security systems. They point out that in all the commercials they’d seen (there are many, many, many more than what I have here), the intruders are men (White men, from what I can tell) and the person endangered is a White woman, either alone or with her daughter:

So they’re selling home security systems by playing on the idea of the vulnerable middle-class White woman, easily victimized in her home. Luckily, home intruders are easily frightened away by an alarm system and run for the hills.

Saturday Night Live recently parodied these commercials, and I think the skit sums them up nicely:

UPDATE: A commenter pointed out this Target: Women segment on the same topic:

If you’re interested, I wrote a piece for The Daily Mirror about my recent trip to the LAPD’s “Behind the Scenes” exhibit here in Vegas (which got a lot of media attention when the Kennedy family protested the inclusion of bloody clothing from Robert Kennedy’s shooting). My friend Larry was interested in the politics involved–whose personal tragedy gets put on public display? Were the displays as sensationalistic as he suspected they would be? He was particularly interested in how the case of the Black Dahlia (aka Elizabeth Short) would be presented, and what the LAPD would think was appropriate to display for public consumption.

So I agreed to go take a look. And I was horrified in so many ways. Absolutely stunned. You can find the piece here.

Violence or Bondage in a Lingerie Store Display?

Last night some friends and I were on the Strip here in Vegas and wandered over to look at City Center, the new casino/very high-end shopping center/”walkable city within a city” that was such a big deal when it opened recently that national news outlets, including NPR, talked about it. Anyway, we were wandering around and came upon a lingerie store with this mannequin in the window: 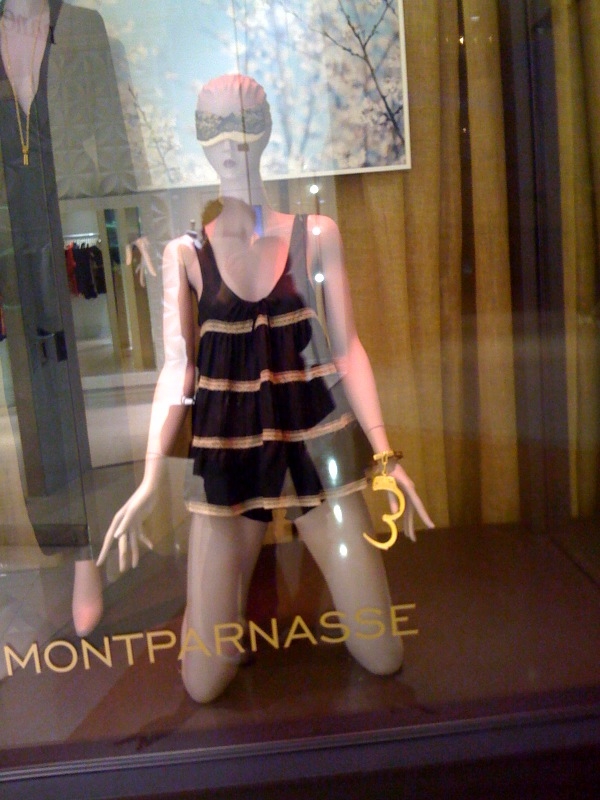 She’s blindfolded, handcuffed, on her knees. Another mannequin was also blindfolded, with ties around her ankles, and a third had a long pearl necklace wrapped around her neck and then tied around each wrist.

Our reaction was, basically, “Agh! Agh! WTF? Why?!?” We all, men and women alike, interpreted it as an icky depiction of sexual domination of women, perhaps even violence.

But of course, there’s another way to interpret it, particularly given that it’s a lingerie store: as consensual participation in S&M/bondage or sexual role-playing.

I still can’t shake off my initial feeling. We often see implied, or obvious, violence toward or sexual harassment of women as marketing or entertainment (see the trailer for the movie Bounty Hunter, vintage Betty Crocker ad, PSA for labeling cleaning products, violence against women in prime time, ad for CSI, t-shirt to show team spirit, ad for shoelaces, Lanvin ads, trailer for Dead Girl, Barney’s window display showing splattered blood and mannequins under attack, is stalking romantic?, trailer for Observe and Report, Rene Russo photo shoot, ha ha! She wasn’t being beaten!, “going in for the kill has never been so satisfying”, oops, I strangled a woman, and…oh, there are many more, but I don’t have time to link to them all). It seems naive to think that people can see mannequins posed like this and completely disconnect them from other portrayals of women bound, gagged, dead, sexually assaulted, etc., that are meant to be funny or sexy.

But it also seems problematic to dismiss the idea that in at some situations, such as this one, the situation could be consensual S&M. Allusions to at least light bondage has become more common in pop culture, particularly handcuffs as a sexy prop (sometimes used for laughs if one partner ends up handcuffing the other to something and then robbing them, stealing their clothes, etc.). Yet those who participate in S&M are also often stigmatized as sexual deviants.

But then, how do we think about S&M/bondage given that the sexual norms common in the U.S. include the idea of female sexual passivity and submission? Is this mannequin problematic in any way even if the store meant to invoke the idea of sexual role-playing?

I am confounded by this. The mannequin creeps me out. I don’t like it. But I’m sure many people can make eloquent arguments against my reaction, or how we approach the various issues involved. So what to make of this mannequin, readers? Help me out.

NEW! (Mar. ’10): SOM sent in this photo of the display in the window of the shoe store Sole Experience in Edmonton, Alberta, that shows a woman in high heels with her feet bound. This image, to me, seems to more clearly imply violence than the one above, possibly because of the use of rope rather than handcuffs, which are associated with sex role-playing:

When I was 15, for some bizarre reason, I saw War of the Roses (trailer).  The movie stars Kathleen Turner and Michael Douglas, who play a married couple in the midst of a divorce and basically spend the entire movie trying very, very hard to hurt each other physically and emotionally.  It’s a violent, violent comedy.

I remember really liking it and telling my Dad who, with his usual gentle wisdom, said something to the effect of “it’s never funny when two people who are supposed to love each other try to hurt each other.”  I was chagrined.

I was reminded of this moment when I watched the trailer for Bounty Hunter, sent in by Ryan G.  In the movie, Jennifer Aniston plays a woman who fails to show up in court and is then, essentially, violently kidnapped by her bounty hunter ex. The trailer:

(Trigger warning for all the links below.)

What it is about U.S. society that makes sexually-charged violent hate so funny? Are we, as the bemoaners claim, anesthetized to violence? Is it an internalized sense that men and women are at war? Is it the idea that (heterosexual) relationships are, ultimately, a zero sume game? Is it a conflation of sex and power, and a constant affirmation that good sex (and relationships) include violence, that makes a movie such as this so titillating? Is it a true hate for the other, supposedly opposite sex? In other words, why doesn’t this trailer, for most, inspire disgust instead of anticipation?