Thanks to a tip from Jay Livingston, I came across this quote from The Pursuit of  Loneliness by sociologist Philip Slater.  It’s long, but wow:

[I]t can’t be denied that the female ideal in America is nonaggressive and nonthreatening, to the point of caricature.  Take for example the film personality of the much-idolized Marilyn Monroe: docile, accommodating, brainless, defenseless, totally uncentered, incapable of taking up for herself or knowing what she wants or needs. A sexual encounter with such a woman in real life would border on rape – the idea of “consenting adults” wouldn’t even apply.  The term “perversion” seems more appropriate for this kind of yearning than for homosexuality or bestiality, since it isn’t directed toward a complete being.  The Marilyn Monroe image was the ideal sex object for the sexually crippled and anxious male: a bland erotic pudding that would never upset his delicate stomach.

It’s important to realize that this Playboy ideal is a sign of low, rather than high, sexual energy.  It suggests that the sexual flame is so faint and wavering that a whole person would overwhelm and extinguish it.  Only a vapid, compliant ninny-fantasy can keep it alive. It’s designed for men who don’t really like sex but need it for tension-release – men whose libido is wrapped up in achievement or dreams of glory. 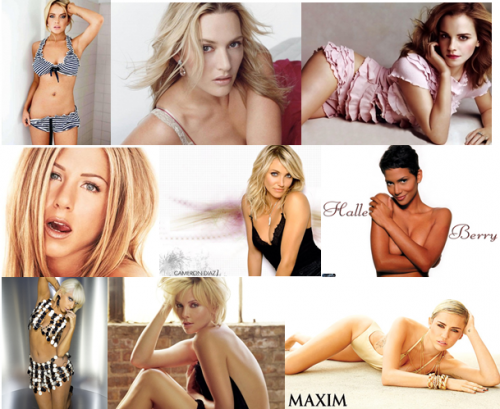 40 Years Since Women Were Granted the Right to Credit Cards

This year marks the 40th anniversary of the Equal Credit Opportunity Act.  This granted women the right to have a credit card in her own name.  This translated into an unprecedented degree of independence for women.  Feminists and their allies fought for this new world and it’s a good thing because we love to buy things with our credit cards sooooooo muuuuuuuuch!

And, thankfully, credit card companies like Banif know just how to make us comfortable, by combining feminism and infantilization and kissing our asses because We. Are. So. Special. “Every day is women’s day!” Wheeeee! 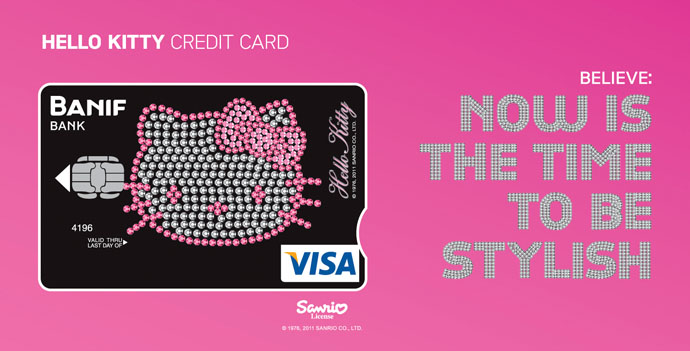 The philosopher Susan Sontag has written achingly about the way in which men are allowed to age and women are not.

The great advantage men have is that our culture allows two standards of male beauty: the boy and the man. The beauty of a boy resembles the beauty of a girl. In both sexes it is a fragile kind of beauty and flourishes naturally only in the early part of the life-cycle. Happily, men are able to accept themselves under another standard of good looks — heavier, rougher, more thickly built…

There is no equivalent of this second standard for women. The single standard of beauty for women dictates that they must go on having clear skin. Every wrinkle, every line, every gray hair, is a defeat.

Perhaps nowhere is this more plain than in the movies, where men’s love interests stay the same age as they get older, and @sphericalfruit sent in a fantastic example.  The four posters below are part of a new marketing plan for the forthcoming movie, The Counselor. 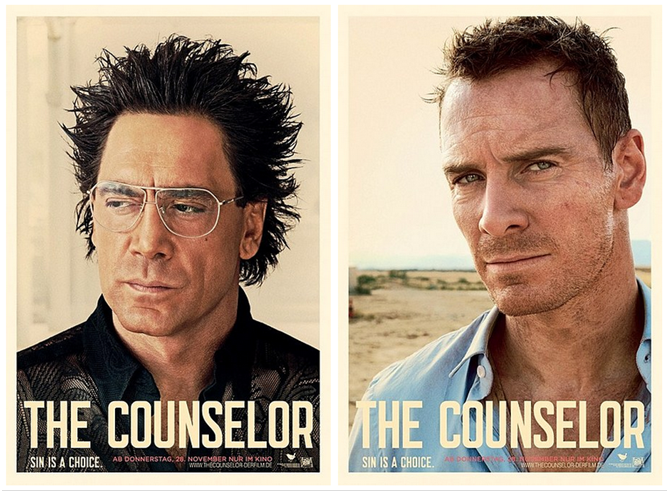 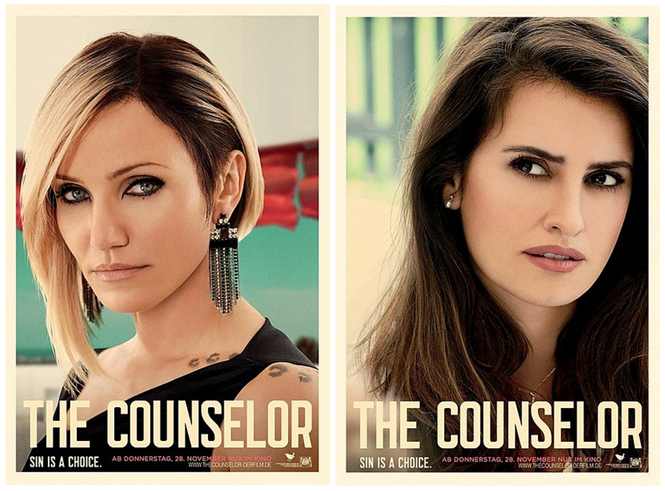 What a stunning example of Sontag’s observation.  The men are not considered unattractive by virtue of the fact that you can tell they have skin.  The women, in contrast, have faces that are so smooth that they look inhuman; their images are halfway between photograph and cartoon.  Amazingly, this treatment of images of men and women is so ubiquitous that it now looks more or less normal to us.

Cross-posted at Business Insider and VitaminW.

Does the Rise of Men’s Sexual Objectification = Equality?

Recently David Gianatasio at AdWeek wrote an analysis of the sudden rise in the sexual objectification of men in advertising.  It seems to have been spurred by the wild popularity of the Old Spice character introduced in 2010, The Man Your Man Could Smell Like.  Gianatasio calls it “hunkvertising.”  Indeed, rippling abdominal muscles suddenly seem to be everywhere. 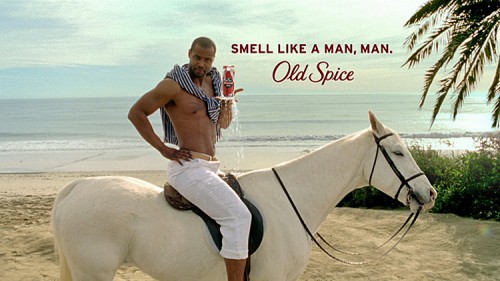 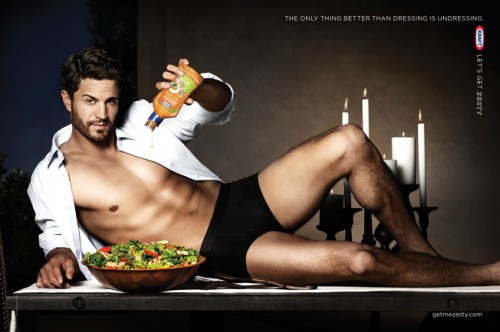 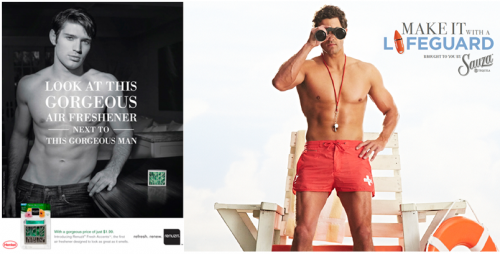 Gianatasio interviewed me for the piece and I had two thoughts.  First, because the ads are so tongue-in-cheek, they didn’t seem to be acknowledging and validating women’s sexual desire, so much as mocking it.  “It’s funny to us to think of women being lustful,” I told Gianatasio, “because we don’t really take women’s sexuality very seriously.”  In this way, the joke affirms the gender order because the humor depends on us knowing that we don’t really objectify men this way and we don’t really believe that women are the way we imagine men to be.

Second, objectifying men alongside women certainly isn’t progress.  There’s the old critique that, if it is equality, it’s not the kind we want.  But, more importantly, the forces behind this so-called equality have nothing to do with justice.  Gianatasio generously gave me the last word:

In May we featured a block of cheese that inspired quite the response.  Riffing off the name “Monterey Jack,” a company was selling “Monterey Jill”: the same old cheese, but reduced fat.  It was an excellent example of the way dieting is feminized. 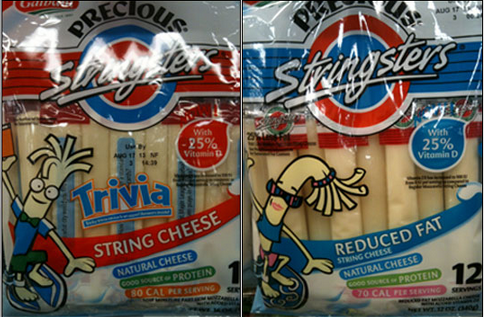 Thanks for reminding the ladies to be worried about their waistlines cheese people!  It’s not as if we don’t get that message absolutely every time we turn around!

Dieting is for women.

I mean we all know that dieting and women go together like peas and carrots.  We know this — collectively and together, even if we don’t agree that it should be this way — not because it’s inevitable or natural, but because we constantly get reminded that women should be on diets and dieting is a feminine activity.

@msmely tweeted us a fabulous example of this type of reminder.  It’s a reduced fat block of Monterey Jack cheese, re-named “Monterey Jill.”  There’s curvy purple font and a cow in pearls with a flower, in case you missed the message.  And, oh, on the odd chance you thought that this was about health and not weight, there’s a little sign there with a message to keep you on track: “Meet Jack’s lighter companion.” 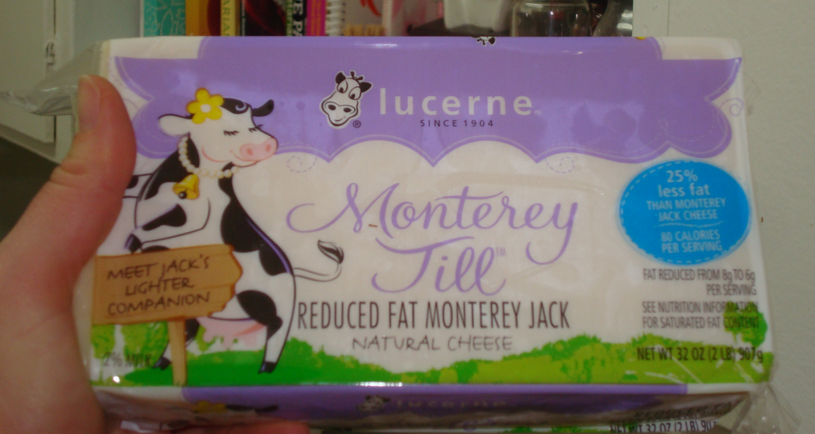 So now we’ve gendered cheese and managed to affirm both the gender binary  (heavy vs. light), heterocentrism (Jack’s companion Jill), and the diet imperative for women.  And it’s just cheese people!  Cheese!

In her classic article, Teddy Bear Patriarchy, Donna Haraway examined the arrangement of the taxidermied animals in the American Museum of Natural History mammal hall in the first half of the 1900s.  She observed that the dioramas consistently featured nuclear families with strong fathers alert for dangers and nurturing mothers attending to their children.

This was a lie, of course. As we well know, the nuclear family is the exception, not the rule among mammals.  Instead of science, it was our own beliefs about men, women, and gender roles that informed the curators of the exhibits… and left viewers with a sense that these arrangements were more natural and universal than they are.

I’m an animal lover and have a broad appreciation for science, so I particularly enjoy exposing this type of projection.  Bee Movie was a particularly egregious case and we’ve written posts on nature documentaries that do this (on hyenas and flatworms).  The latest case is a Geico commercial.  See if you can catch it:

So, if you know anything about lions, you know that it’s unlikely that “Karl” is doing the hunting.  Among lions, it is the females who specialize in hunting (and they usually do so in groups, for what it’s worth).

The commercial certainly coincides nicely with what many of us believe to be true about the natural role of human men, but it doesn’t reflect the reality of lion life at all.

Perhaps the people at Geico thought that a female huntress would confuse or distract the reader from their joke.  Or perhaps everyone involved in the project didn’t know this fact about lions; their gender ideology would have masked their ignorance, such that it never occurred to them to look it up.  Either way, contemporary ideas about gender shaped this “diorama” and it potentially reinforces similar beliefs among viewers.

S. Alfonzo sent us a link to the abridged version of The Codes of Gender, in which Sut Jhally, known for a number of documentaries on pop culture, analyzes current messages about masculinity and femininity in advertising, applying the ideas of Erving Goffman regarding gender and cultural performance. Definitely worth the time to watch:

The Media Education Foundation has provided a full transcript and tips for using the film in the classroom.