Taking a cue from sociologists, The Nightly Show has started a segment called the “Super Depressing Deep Dive.” In the five minute segment I’ve embedded below, they explain that we’ve known that lead was highly toxic since 1904, but the US didn’t ban lead paint until 1978 and lead pipes even later. Why not?

Looking at the evidence piling up, the League of Nations encouraged all nations to stop the use of lead paint in 1922, but the United States didn’t sign on. They deferred to the industry — the Lead Industries Association and the National Paint, Varnish, and Lacquer Association — who successfully lobbied the federal government. Not only did the US decline to ban the substance, in 1938 the government actually mandated that lead paint be used in housing projects for poor people, putting the lead industries profits above the health of poor children.

The industry also fought warning labels, criticized the science, sued at least one source — a television show — for telling the truth about lead, and blamed the victim, claiming that the real problem was “uneducable Negro and Puerto Rican” parents who failed to adequately protect their children. They even dispensed pro-lead propaganda directly to kids, like in this page from a free children’s book distributed by a paint company in which a pair of rubber boots say to the child (bottom right):

You knew when we were moulded
The man who made us said
We’re strong and tough and lively
Because in us there’s lead. 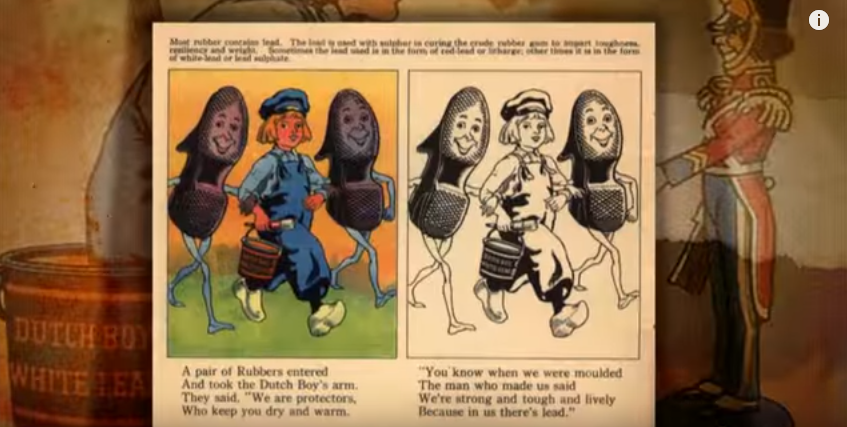 Because of the disproportionate impact on the poor and racial minorities, the Black Panthers made fighting lead paint a part of their mission and their work ultimately contributed to the banning of lead paint in 1978 and pipes in the 1980s. By that time, though, the damage was done. Lead pipes are still in the ground and lead paint continues to be a serious threat in poor neighborhoods, doing irreparable damage to the lives of poor children and the communities they are a part of.

[…] It used to be the norm for lead pipes to be used in municipal plumbing throughout the country, valued as a more convenient way to run waterlines to houses. Even after the dangers of lead became widely known and the League of Nations recommended that all countries ban lead paint and piping, it took the U.S. government close to 80 years to end its use, owing to robust lobbying efforts by the lead industry, and even mandated it be used in low-income housing projects. […]

It's time to phase lead out completely. After thousands of years of health and brain damage from lead, it's time enough.